Experts speculate over who's responsible for the deadly attack. New photos, videos, reports emerge from the scene 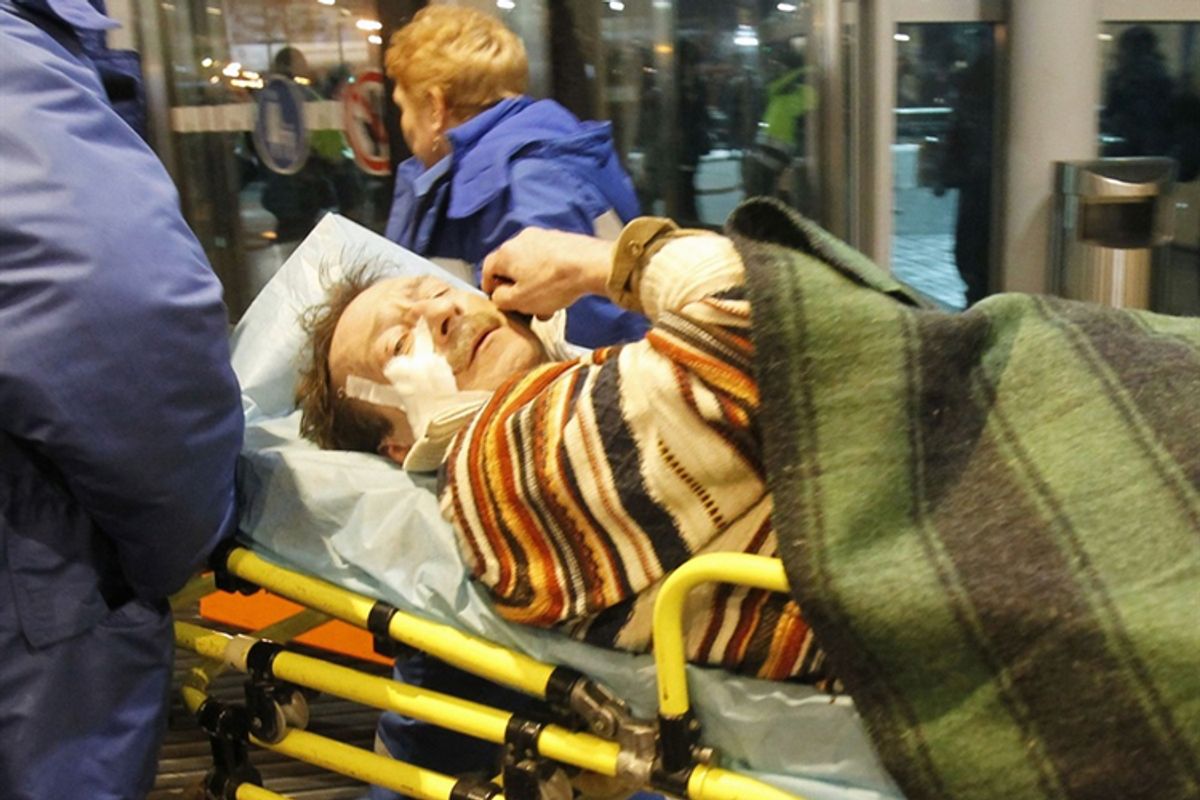 Medics attend to a victim of a bomb explosion at Moscow's Domodedovo airport on Monday.
--

The BBC has collected more information about the planning of the attack. Quoting Russian affairs analyst Andrei Ostalski:

The attack was so professionally engineered, it was done in such a brutally efficient way there are not too many groups in Russia that have this kind of practical experience of setting up such devices. So of course everybody is thinking about Chechen groups and insurgents who have been trained to do that kind of thing.

Russian TV's Vesti news program also spoke with an eyewitness, who reported that the bomber shouted "I'll kill you all" before detonating the explosives.

The body parts of the alleged suicide bomber have been found at the scene according to Interfax news agency. Reportedly it is a man of Arab appearance. A source from the blast investigation team told Itar-Tass that the parts may indeed belong to a terrorist, but added that it is too early to say for sure that the explosion was carried out by a suicide bomber. “Before a professional examination is taken, one must be very careful with such terms as ‘suicide bomber,’” the source said. According to him, the perpetrators could have use someone who did not know he was going to blow up, or he could have just been carrying an explosive device with him.

Speculation continues about who orchestrated the attack and also whether it was indeed carried out by a suicide bomber. Glen Howard, president of the U.S. Jamestown Foundation Research Institution, suggested to Reuters:

Given what happened last year with Moscow metro attack and series of recent attacks in the North Caucasus on strategic infrastructure (hydro facilities, railways, etc) this is part of that pattern.

Sergey Strokan, a reporter from the Kommersant newspaper, told Russia Today that it's too soon to blame any particular party:

I've seen on the web that some Western media was quick to say that this might be done by a group or a batallion of the so-called suicide bombers, who are under the control of the ex-Chechen rebel leader Doku Umarov, but let me emphasize once again that it's too early to speak about who specifically was responsible for this.

On the other hand, one thing is definitely clear –- it was done by the so-called 21 century terrorist group. It by no means can be called an act of individual due to two reasons –- first, it was definitely a powerful explosive device, which could have been accessed by a certain group and the second –- is the place of the terrorist act.

The attack appears unlikely to have a major or long-term impact on Russian markets, according to experts interviewed by Reuters.

The AP also just released this raw video from the moments after the explosion:

CNN National Security Contributor Fran Townsend reports in a live broadcast that the bomb detonated outside of a small restaurant near the baggage claim. The suspected suicide bomber would not have needed to clear airport security, and Townsend suspects that this attack could lead to stricter security standards in airports and office building lobbies.

The bomb itself exploded with the equivalent of 5 to 10 kilograms of TNT, and experts believe that it was also packed with shrapnel which would explain the large number of injured.

Three men who have been living in the Russian capital for a certain period of time reportedly took part in organizing the blast, a source told Interfax news agency. He also noted that these three were believed to be Russian North Caucasus militants and might have been somehow connected to two women, one of whom blew herself up at a practice range club in Moscow on December 31 and the other was later arrested in the city of Volgograd

The BBC reports in a tweet that 35 people have died in the attack, according to an airport spokesperson. The number of injured continues to vary, though, at least 58 have been taken to hospitals. According to Russia Today:

58 have been taken to nearby hospitals, 46 of them are reported to be in critical condition. Over 100 more people are receiving medical help in the airport. The dead remain at the airport due to the investigation.

More videos are being uploaded from inside of the airport. Most of them show the injured being treated and a general sense of disorientation.

This video uploaded to YouTube apparently shows the aftermath of the bombing at Moscow's busiest airport:

Russia Today announced that they've confirmed a least one suicide bomber. While the airport remains open and flights are arriving and departing, a number of people are rushing to leave the airport. Taxis are reportedly charging exhorbitant fees to shuttle people from the airport back to downtown Moscow. Russian authorities have waived train fares to help deal with the traffic.

Russia Today's coverage so far has been to-the-minute.

Russian officials say an explosion caused by an apparent terrorist attack ripped through the international arrivals hall at Moscow's busiest airport, killing 31 people and wounding about 130.

President Dmitry Medvedev told officials "from the preliminary information we have it was a terror attack,"

The state RIA Novosti news agency, citing sources in law enforcement, said the explosion Monday afternoon at Domodedovo Airport may have been caused by a suicide bomber.

The state RIA Novosti news agency, citing sources in law enforcement, said the explosion at Domodedovo Airport may have been caused by a suicide bomber.

Moscow police were put on high alert and immediately beefed up patrols in the subway system, a previous target of terrorists.

Mark Green, a British Airways passenger who had just arrived at the airport, told BBC television he heard the huge explosion as he was leaving the terminal.

"Literally, it shook you," he said. "As we were putting the bags in the car a lot of alarms ... were going off and people started flowing out of the terminal, some of whom were covered in blood."

"One gentleman had a pair of jeans on that was ripped and his thigh from his groin to his knee was covered in blood," he added.

Green said thousands of people were in the terminal at the time of the blast.

Domodedovo is generally regarded as Moscow's most up-to-date airport, but its security procedures have been called into question.

In 2004, two suicide bombers were able to board planes at Domodedovo by buying tickets illegally from airport personnel. The bombers blew themselves up in mid-air, killing all 90 people aboard the two flights.

Built in 1964, Domodedovo is located 26 miles (42 kilometers) southeast of the center of Moscow and is the largest of the three major airports that serve the Russian capital, serving over 22 million people last year.

Terrorists have targeted other transportation centers in Moscow.

In December 2009, Chechen rebels claimed responsibility for blowing up a high-speed train between Moscow and St. Petersburg, an attack that killed 26 people and injured scores.