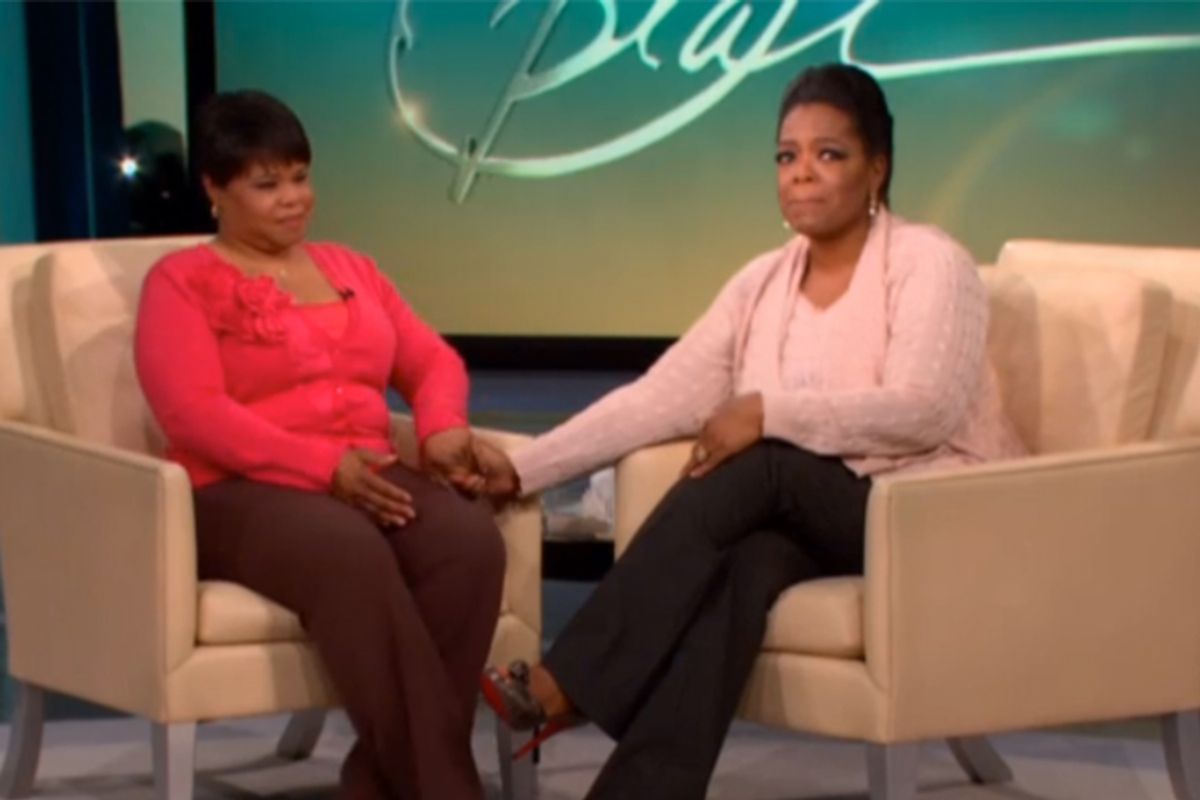 When a woman who has given away entire roomfuls of cars and flown audiences around the world says, "I thought I'd seen it all, but this was the miracle of all miracles," she's probably got something interesting up her sleeve. And when the same person, who has candidly discussed her struggles with weight and done more for public crying than a gaggle of John Boehners, says she's going to share "some news that literally shook me to my core," you might as well run out and buy some stock in Kleenex right now. So anticipation has been running high since Oprah Winfrey announced last week that she was revealing a "family secret."

Wow, she was not kidding with this "most spectacular season ever" stuff. On Monday's show, she introduced to the world the half-sister she only recently learned she had. "It's a process," an astonished Oprah told her audience. "I'm still processing!"

This, like so many of these tales, is a story of long-hidden family secrets and private anguish. Winfrey's parents, who never married, split up when she was very young. She was 8 years old and living with her father Vernon when her half-sister Patricia was born. Oprah hadn't even known her mother, Vernita, who by then had two other children, had even been pregnant. Patricia, whose last name has not been disclosed, meanwhile lived for years in foster care and was a mother herself before her 18th birthday. Then, a few years ago, she began looking for her family. In 2007, she saw an interview with Oprah's mother that revealed details that corresponded with what she knew about her birth mother. Though Winfrey's mother declined contact twice, Patricia reached out to Winfrey's niece, and a DNA test proved the family connection.

Yet even after initially figuring out that her sister was one of the most famous women in the world, even after subsequent DNA confirmation, Patricia never once thought to go to the press. Instead, she says she worried about how to handle the news without hurting the queen of daytime television. "Family business needs to be handled by family," she said plainly on Monday's show, as her own two grown children watched, moist-eyed, from the audience.

And in the understatement of the year, Oprah replied, "As you can imagine, Patricia and I had a lot of questions for our mother." Yes, after finding out your mom had a baby when you were 8 years old and never mentioned it, I'd bet you would.

In a segment shot when Patricia met their mother late last year, Vernita Lee talked about the daughter she gave up, and why she'd rejected her initial overtures. "I was a little leery," she admitted. "I felt a little funny about it. I thought it was a terrible thing that I had done, gave up my daughter when she was born." She'd made the choice, she said, because she was trying to get off welfare and "wasn't able to take care of her." She recalled the last time she saw her child. "When I left the hospital I told the nurse I wasn't going to be able to keep her. And the nurse said, 'But she's so cute, why not?'" She then said she'd later gone back looking for the baby but she'd already been removed. That admission immediately caused Patricia to sob: "I never heard I was a pretty baby. I always felt she never wanted to give me up." Pass the Kleenex.

Maybe it's her lengthy experience with family secrets that makes Oprah such a champ at dealing with them. Whatever the reason, back in the studio, the virtuoso of empathy didn't look bitter or betrayed. Instead she chose to put herself in her mother's place. The long-lost sister is, after all, only the latest in Oprah's long line of big reveals. Over the years, she's disclosed her childhood history of sexual abuse at the hands of male family members and friends, and her bouts with suicidal thoughts. Several years ago, her now deceased half-sister (coincidentally also named Pat) spilled the story of Oprah's unplanned pregnancy at age 14 -- and subsequent loss of her baby -- by selling the story to the tabloids.

Now, after meeting her newly found sister, Winfrey told her audience she believes her mother "is still stuck in 1963 and is still carrying the shame that would have been put upon her and hasn't been able to release herself and embrace you and this miracle." Then she added, "I would like to say to our mother, let that go. There are millions of people who've given up their children because they couldn't provide the best for the them. You can let that go." As if that wasn't tear-jerking enough, she went on, discussing how her late sister "sold me out" by saying, "I realize that was a gift to me, because it released me from the shame that my mother still carries." And with that, everyone in America with abandonment issues went completely to pieces. My eyes are still leaking.

Somehow, throughout her lengthy career, Oprah has managed to deftly walk the line between fiercely guarding her personal life and recalibrating America's TMI meter. She can cheerfully dispense firsthand tips on menopause and admit that she's smoked crack, and still manage to be notoriously tight-lipped about the areas of her life she chooses to wall off. What Patricia refers to as "family business" is also big news, concerning as it does a woman who can drive the entire cattle industry loco by mentioning she's giving up burgers.

So Oprah has done what she does best: She's found the universal in her intimate saga. She's crafted a story that resonates for every viewer with a similar story. Patricia's declaration that "It's a miracle to know that we have a family. To know we have another half," is a perfect articulation of what so many of us who've sought out missing family members have felt. "You don't know," she said. "You could go to the grocery store, you could go the movies and not know if this person is related to you." If you haven't experienced it, it's true, you don't. And if you have, hammer, nail, bang. As Oprah says, "Now I understand all of you who've been looking for long lost relatives." It's a common longing, and this time, it's one that gets a happy ending. Not just because a woman named Patricia is suddenly hooked up with Oprah Freaking Winfrey. It's because by going public in a way that embraces the lost sheep and forgives the mother who let her go, Winfrey grants a little bit of hope to others still searching, and compassion to those with family secrets of their own. It's not just another "Aha" moment. It's a chance for grace.