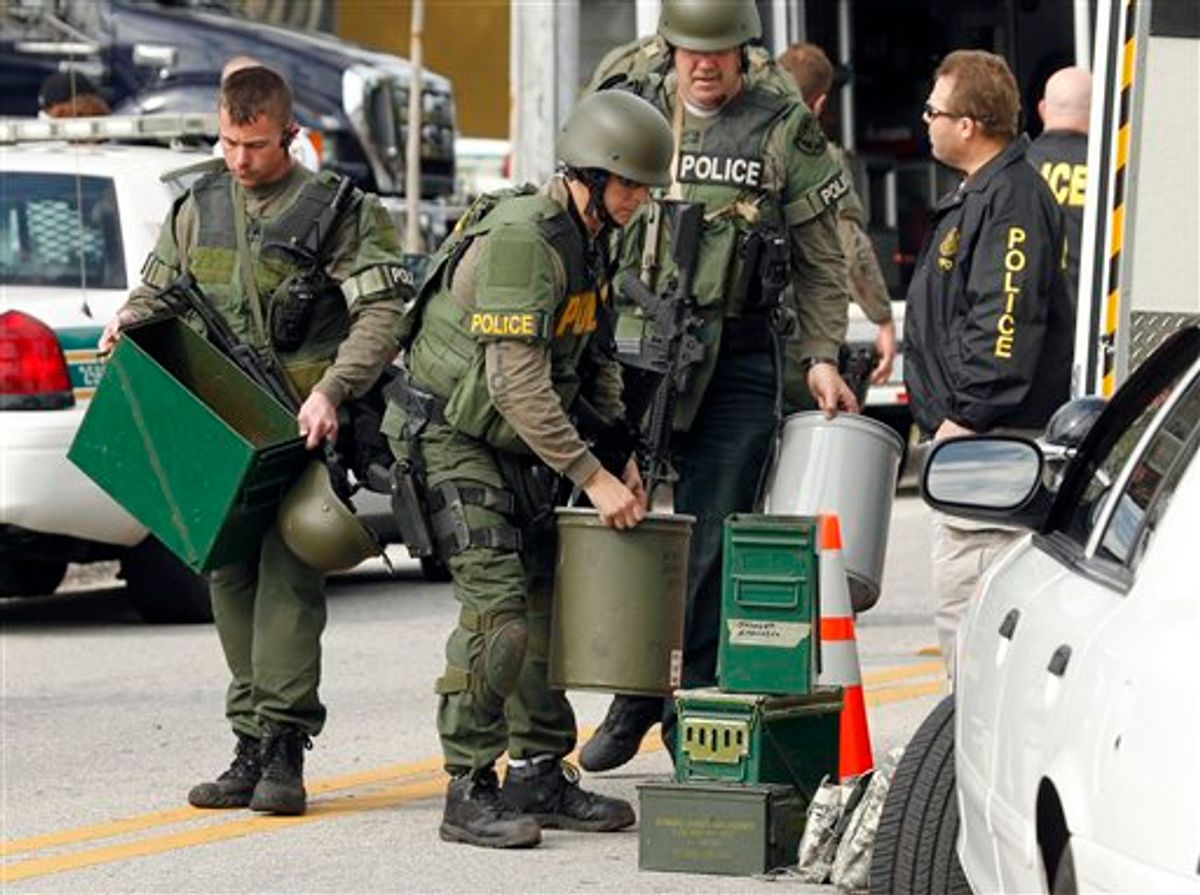 Authorities and a fugitive holed up in an attic fired more than 100 shots at each other Monday in a firefight that killed two officers, wounded a deputy U.S. marshal and led to an hourslong standoff that ended when the suspect was found dead inside the home.

St. Petersburg Police spokesman Michael Puetz said the suspect was found dead when officers went into the home Monday afternoon, about six hours after the shootout, the latest in a recent rash of shootings across the nation that have killed or wounded law enforcement officers.

The law enforcement agents came to arrest Hydra Lacy Jr., 39, around 7 a.m. on an aggravated battery charge, and investigators believe he is the one who opened fire on them, Puetz said. They had not confirmed Lacy was the shooter.

He said Lacy had a long record that includes convictions for armed robbery and sexual battery. He was listed as a sex offender with the state and had failed to register in December with the Pinellas County Sheriff's Department as required.

"He was somebody we wanted to get off the streets, " Police Chief Chuck Harmon said. "Who expects to walk into a house and get gunfire from the attic?"

Harmon would not identify the dead officers pending notification of their relatives.

Initially, one of the officers, the marshal and a Pinellas County Sheriff's deputy arrived at the house and were told by a woman that Lacy was in the attic. The three called for backup. The officer and the marshal were shot before backup arrived, Puetz said. He said the second officer was later shot as he tried to rescue the wounded men. The deputy and the woman were not hurt.

After the gunfight, authorities had tried to force the gunman out by cutting off the home's electricity and water.

Earlier, police used a vehicle to punch a hole in the wall to get to one of the officers who later died, Puetz said.

Another police spokesman at the scene, Bill Proffitt, said it was possible the suspect used one of the officers' guns during the struggle in the attic.

The home, situated in a middle-class neighborhood on the south side of St. Petersburg, was listed in Lacy's name, according to property records. After the shootout, a Department of Homeland Security armored tactical vehicle was parked nearby, as dozens of law enforcement officers congregated on nearby streets. A police tank was also trained on the home.

Court records show Lacy failed to show for his scheduled trial Nov. 1 on the aggravated battery charge, and an arrest warrant was issued the next day.

Monday's shooting is the latest in a string of shootings of police officers and comes four days after two Miami-Dade County detectives were killed by a murder suspect they were trying to arrest. That suspect was killed by another detective.

The officers were being remembered Monday at a funeral, where news of Monday's shooting added to the grief already palpable among the thousands gathered at American Airlines Arena in downtown Miami.

On Sunday, a man opened fire inside a Detroit police precinct, wounding four officers including a commander before he was shot and killed by police. Authorities said the gunman walked in just after 4 p.m. and fired indiscriminately. The officers' injuries were not considered life-threatening, said Police Chief Ralph Godbee.

And on Monday, a Lincoln City, Ore., police officer was critically wounded when he was shot during a traffic stop. Oregon State Police said the officer had pulled the suspect over for speeding.