A new book looks at the personal stories behind some of history's best-known thinkers, with fascinating results 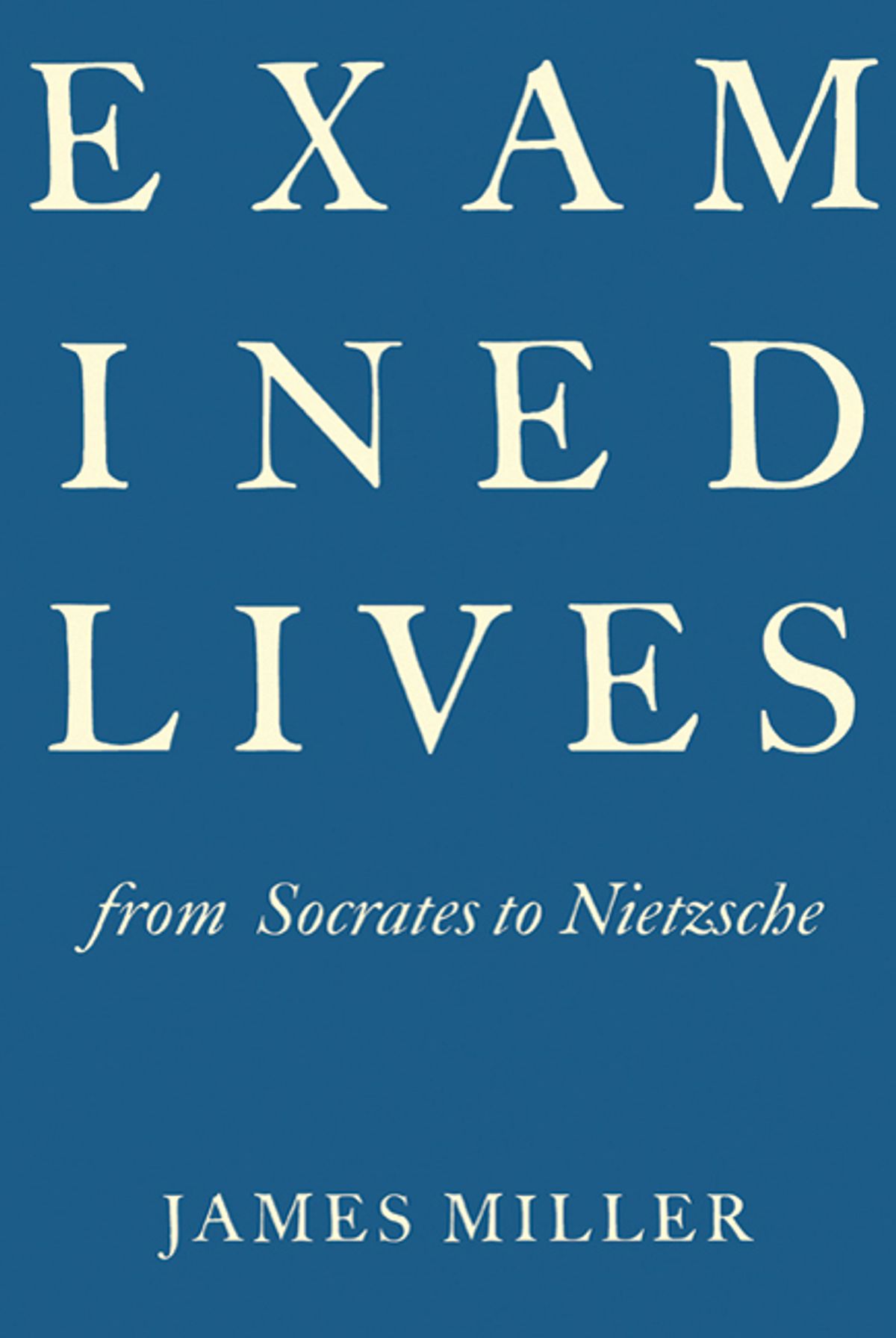 Plato has Socrates say, in the "Apology," that the unexamined life is not worth living. Many of Socrates' successors took this saying to heart, regarding the examination of life as definitive of their calling. With "Examined Lives," a set of beautifully written and richly informative mini-biographies of a dozen philosophers, James Miller explores what this meant to each of them. His conclusion is a negative one: the combination of wisdom, self-understanding and self-possession that Socrates' successors took to be the gold standard for the philosophical life proved impossible for most of them to attain, and, in some cases, what they preached and what they practiced fell widely apart.

The implication is that where they failed, we cannot expect to succeed; the Socratic ambition, Miller says, represents "an unending quest, with no firm goal and no certain reward, apart from experiencing, however briefly, a yearning for wisdom and a desire to live a life in harmony with that yearning -- come what may."

There are two reasons for disagreeing with this conclusion. One might point out that a demand to seek self-understanding (in obedience to the Delphic oracle's "Know Thyself") and to reflect on one's choices and values, is not quite the same thing as a demand to succeed in living accordingly. As the cliché has it -- no less truly for being a cliché -- it is the journey not the arrival that matters. Socrates put his point in the negative ("the unconsidered life is not worth living") for a reason: Giving no thought to how one should live is by default to let chance or others decide one's fate. So life can be worth living if we reflect and try to choose, even if we do not always succeed in acting as we should. Frailty or ill-luck (both of them common barriers, as Aristotle saw, to moral achievement) might get in the way; yet we honor people as much, if not more, for what they sincerely endeavor to do and be, as for what they achieve; and this is often more than enough.

Miller therefore need not have deduced so negative a conclusion from his 12 life studies, for one thing his subjects show is that they had the desire for, and an understanding of, the good and well-lived life, even if most of them failed to live fully up to their ambition for it. At least they strove to know, which is more than many so much as attempt; as Bertrand Russell said, "Most people would rather die than think, and most people do."

The second reason is that Miller's conclusion might have been different if he had chosen a different set of philosophers. The 12 he writes about (and Miller expresses the regretful inevitability that they are all men) are Socrates, Plato, Diogenes, Aristotle, Seneca, Augustine, Montaigne, Descartes, Rousseau, Kant, Emerson and Nietzsche. Nearly half of them do not figure in the canon of philosophy as studied in contemporary universities, these being Diogenes, Seneca, Augustine, Montaigne and Emerson. Socrates is not studied at all, being taken as the mouthpiece of Plato in the latter's dialogues (no doubt the method, and some of the doctrines, are genuinely Socratic, but it is impossible to peel the master and pupil apart). The closest Rousseau gets to philosophy is political science, cultural history and literature. Nietzsche is certainly studied in philosophy departments, but as something sui generis; unlike the remaining four fully paid-up members of the standard curriculum, he does not fit into the orthodox mold on epistemology or metaphysics, logic or ethics.

Now, Miller has a good point to make with this choice, which is that the selective nature of the philosophy curriculum in contemporary universities is not representative of the philosophical tradition itself. In classical and post-classical antiquity, a philosopher was someone who sought to live a reason-guided, ethically consistent life based on self-knowledge and a clear understanding of the world's false blandishments. There was a compelling reason for this: The brevity and insecurity of life required counsels of fortitude, designed to help the ancient philosophers achieve "ataraxia" -- peace of mind -- in the midst of the chances, changes and dangers of an uncertain world. Cicero summed up the quest by saying that to learn to philosophize is to learn how to die, for when one has lost one's fear of death, one has truly liberated oneself to live well.

One can and should accept Miller's point here, therefore; as philosophy was in its Socratic origins a quest to know how to live, this emphasis is worth reemphasizing. But also one can and should point out that a different choice of figures would have led Miller to a different conclusion. Examples of philosophers who succeeded in living the Stoic or ataraxic life, philosophers who were martyred for their principles, philosophers who lived and died courageously, philosophers who stuck by their principles, can be found to illustrate the thesis that the power of reflection gives what the Socratic injunction asks for. So Epictetus and Marcus Aurelius, Giordano Bruno and Spinoza, Hume and Hazlitt, could have been among Miller's partly offbeat choices, and they would all have been models of consistency and principle -- unlike Seneca and Rousseau, who easily represent the great gulf between principle and practice that gives the lie to the Socratic ideal. Though to be fair to Seneca, he certainly died like a philosopher. Rousseau, who abandoned a series of his bastard newborns on the doorstep of a foundling hospital, never even began to live like one.

On the other hand, Miller could have made his portrait of philosophy's failure to achieve the Socratic ideal even more dramatic: to the madness of Nietzsche he could have added Althusser's strangling his wife, Russell's philandering, Heidegger's Nazism and Sartre's Communism, Wittgenstein's gratitude for war, and, if the definition of philosopher is extended further, a lot worse besides.

None of this matters. True, Miller presents his 12 mini-biographies as responses to Foucault's remarks about "the problem of the philosophical life," namely, the question of the relevance of philosophy to the questions of what one can know, and do, and hope for, given the conquests of science and the fragmented and competing voices of religions. But one need not take the essays as endeavors to see if philosophy still has a role in helping us identify the meanings of life. Each of them is a little gem in its own right as the portrait of an independently interesting individual and his thought. Miller is careful as well as eloquent, so we get penetrating vignettes of intensely interesting people who were moved in their several ways to contemplate the big questions, exploring themselves and others to achieve the kind of enlightenment that liberates, whatever form the truth appeared to them to take.

It is especially welcome to find Montaigne and Emerson included, as they properly should be, among philosophers worthy of the name. There is considerably more enrichment to be had from their writings on the question of what it is to be human than in, say, Descartes or Kant, great minds as these (and especially the latter) are. I think Miller might have profited us more by replacing Diogenes with Epictetus or Cicero, the latter not least because of the great influence he had over the European mind from Erasmus (who thought he should be called St. Cicero) to Hume (who vastly preferred him to the Bible). And whereas Augustine is a name to excite theologians, the reversion to an orthodoxy that is the end point of his intellectual quest makes for a less interesting story than the others.

The two best of an excellent sequence of essays are those on Emerson and Nietzsche, and most especially this last. Because of his strange and tormented genius, Nietzsche has been much biographied of late, and rather well; but Miller's account is so well crafted that it illuminates him with wonderful clarity, like a sharp engraving on metal. His physical frailty, even femininity, and its contrast to his aggressively ambitious mind, are subtly sketched, and the harbingers of lunacy in his late works are made salient. Readers of this portrait will see Nietzsche from a slightly shifted perspective accordingly.

Miller gives us a fine read, and much to chew profitably upon. With luck we might get another dozen portraits from his pen; and with them, perhaps, a less pessimistic assessment of the profit philosophy offers.