"Lights Out" throws a knockout punch 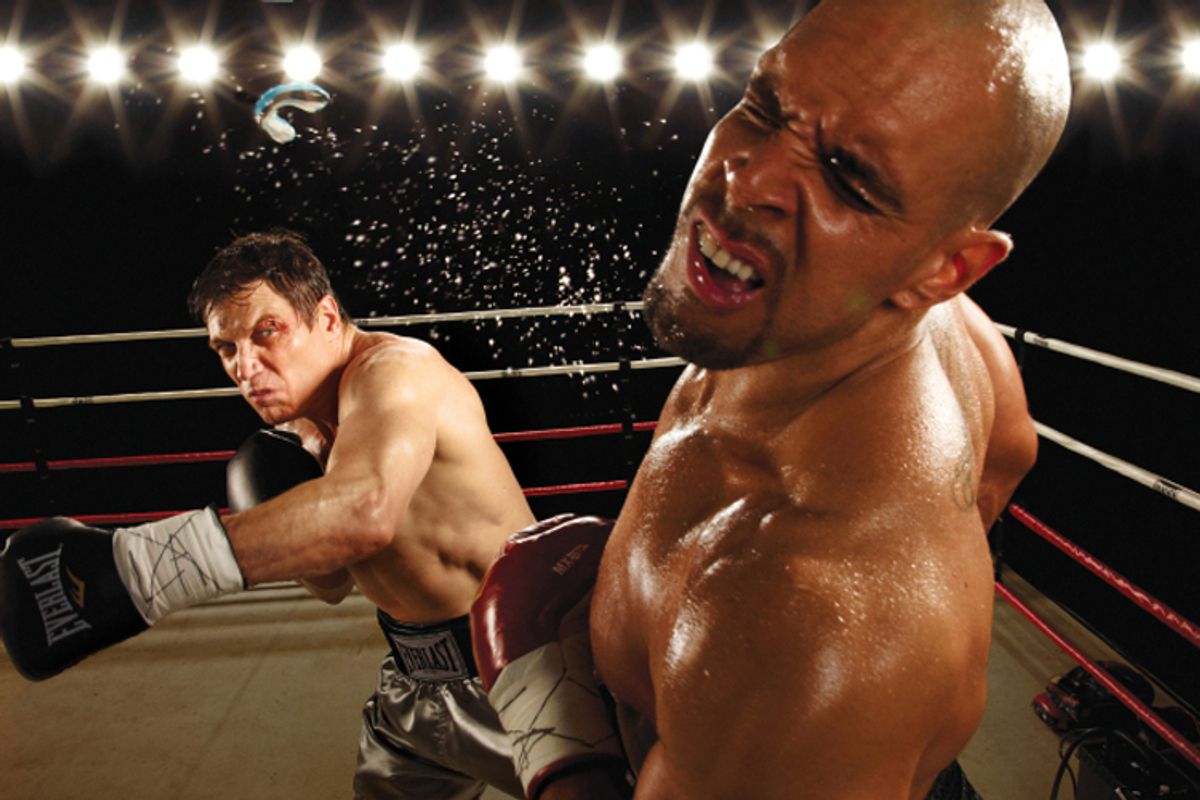 As soon as possible, every ambitious TV series must produce what I call a "Get on the Train" episode -- an episode that demonstrates mastery not just of the medium itself, but the show's dramatic raw material: its characters, story and themes. An installment that confirms beyond a doubt that the people who make the show know what they're doing and what they're trying to say, and can put it all across with discipline and panache. When you've seen an episode like this, you decide to get on the train and see where it takes you.

Tonight's installment of the boxing drama "Lights Out" (10 p.m./9 Central), "The Shot," is a Get on the Train episode -- modest and economical, yet so densely packed that I've seen it three times but continue to notice new things. (FX has posted the first couple of episodes here if you want to catch up.)

Created by Justin Zackham and executive produced by Warren Leight, the show runner of HBO's "In Treatment," "Lights Out" tells the story of Patrick "Lights" Leary, a 39-year-old former heavyweight who retired after an especially brutal fight. The series takes place five years after the match that ended Lights' career. Intriguingly, the program avoids showing us exactly what happened in that ring; all we know is that it was a close fight, and that fans continue to argue about whether Lights or his opponent, Death Row Reynolds (Billy Brown), won. (Lights insist it was him -- but there something defiant and slightly guarded about how he says it.)

Although Lights has a bit of a temper and can be almost comically stubborn, he's a stable, dependable, decent guy and has been married to his wife, Theresa (Catherine McCormack), long enough to have had three daughters with her; the eldest is nearly college age. He's managed by his younger brother, Johnny (Pablo Schreiber from Season 2 of "The Wire"). Johnny was a pro fighter for a while, but left boxing for as-yet-undisclosed reasons. Lights and Johnny's dad, Pops (welcome back, Stacy Keach!), is an aging but still formidable trainer who runs a gym in Bayonne and is determined to mentor the next up-and-comer.

At the center of everything is Lights,. His day-to-day existence is all about hustling to make every doller he can (a predicament that should speak to the lives of a Americans who have never seen a boxing match). Like many successful athletes, Lights earned a lot and let his standard of living rise too high, too fast. He's got too many properties, too many projects, too many expenses. Although nobody in the show has said so yet, there's clearly a gap between what Lights wants (or feels obligated to pay for) and what he actually needs. His wife and three daughters are used to a certain standard of living -- thus the suburban McMansion and the private schools -- but they haven't said anything to indicate that they couldn't live without those things if they had to; yet Lights works hard to provide them anyway, and to pay rent on the struggling gym that he built for Pops. We see him enduring a long, intrusive TV interview to prove himself on camera and maybe land a commentating gig, and picking up pocket money calling a local bingo game. In an intriguing twist that links "Lights Out" to pulp crime thrillers and film noir, Lights also starts doing big-money favors for a local crime boss -- jobs that always end badly for Lights.

Through a fluke of pop culture timing, "Lights Out" premiered about two weeks after the release of David O. Russell's movie "The Fighter," a blue-collar melodrama about the rise of Boston's "Irish" Micky Ward (Mark Wahlberg). The film might have hurt "Lights Out" by making it seem less special. The projects do have some things in common, including a fascination with the hard realities of money, and a keen grasp of how family ties can interfere with sports success -- or even destroy it. (Both Micky and Lights have troubled brothers who were fighters once, and who view their more successful siblings with a mix of loyalty, love, jealousy and resentment.) But the film and the TV series feel different, and are interested in different things.

"Lights Out" has that touch of pulp I mentioned earlier (kid brother Johnny is a gladhanding, catnip-to-the-ladies hustler along the lines of Sidney Falco in "The Sweet Smell of Success," and there's an upcoming episode that revolves around an illegal cage fight!). But all in all, it's more a realistically scaled drama than a he-man fantasy, more an unassuming, B-movie type of production than a prestige project, and more of a work show than a sports show. Lights' business just happens to be hitting people, training others to hit people, and capitalizing on his past as an expert in hitting people; but in the end, it's a job, and every major decision comes down to money. How much does the family need that week? How many thousands of dollars do they need to keep Pops' gym open for another month, and what's the fastest way to get it? Ethical concerns fall by the wayside when landlords are breathing down your neck. The characters might take moral shortcuts anyway, but their milieu -- a sport that has always been joined at the hip to gangsterism of every sort -- makes shortcuts the rule rather than the exception. ("Integrity?" Johnny grouses to Lights in tonight's episode. "You kidding me? This is boxing!")

The series is also about the difficulty of balancing work life against home life -- how the first can overwhelm and even obliterate the second, and how antiquated male codes make things worse. In many ways Lights is almost a parody of the strong-silent type. He keeps too many secrets from Theresa (almost every problem in their marriage can be traced to Lights' stoic refusal to let his wife know the extent of their money problems). He's so genial and controlled that it's always a bit shocking when he erupts into violence and reminds us that this is, after all, a man who is defined by his fists. The directors and editors convey Lights' flashes of temper via flash cuts of previous acts of violence, showing you how they're all connected, how they're all expressions of the explosive life force that makes Lights a great boxer.

In tonight's episode,  Lights' eldest daughter, Ava (Meredith Hagner), walks out of an argument with her dad, goes into her room and slams the door. Lights starts pounding on it (as any parent might) but much harder than is necessary. He's not reacting (or overreacting) to circumstance; he's tapping a primal well. Episode director Ed Bianchi (who helmed some of the best episodes of "Deadwood") cuts to glimpses of violence from previous episodes -- quick shots of Lights in the ring with Death Row Reynolds and Lights getting in a stupid fight outside a bar with a drunken fool. His middle daughter, Daniella (Ryanne Shane), calls out to him, "Daddy ..." and it seems to break the dark spell. Then Bianchi cuts to a wide shot of Lights in front of Ava's door, small in the frame, center screen, Daniella standing in her doorway in the background smaller still, and in the left foreground, a painted portrait of the intact, happy family.

The thematic frame that encloses all of "Lights Out" has to do with legacy and memory. Although Lights rarely talks about it, he's terrified of boxer's dementia, an Alzheimer's-like disease that destroys the memory, and worries that he's already manifesting warning signs. (He forgets a lot of little things.) Tonight's episode, which was written by Bryan Goluboff ("The Basketball Diaries," "In Treatment"), ties that fear in with the wider fear of growing old -- a fear that wells en route to the inevitable as you see yourself turning grey and start wondering if you left a mark or not, if your life meant something or if it was all a lot of noise and motion, a big distraction.

"The Shot" is built around Lights' impending 40th birthday. Goluboff and Bianchi intertwine Lights' daughters' creation of a biographical "memory book" about their dad with preparations for the gym's first big title fight, an Atlantic City bout between an established super-middleweight and one of their own prospects, a young, talented, but annoyingly cocky Armenian-American named Omar Assarian (Pedro Pascal). You've seen pre-fight training sequences a million times, but the ones in this episode acquire a different shading, a new power, because they're intercut with with the run-up to Lights' birthday. Lights initially doesn't want to get involved with fight prep because it's his dad's job, and because getting involved might call up bad old memories for Lights. But eventually he relents. And as Omar's youthful petulance melts and we see his fear -- and Lights' patience as he shows Omar how to handle that fear -- we can see a different future for Lights, one in which he departs the ring physically but stays in it philosophically, scrutinizing his own experience and passing knowledge to a new generation of boxers just as Lights the father passes down parental wisdom to his children.

The high point of the episode [SPOILERS AHEAD] is the last act -- the finest 12 minutes I've seen on TV in years, and about as strong an illustration of the power of cross-cutting as you'll ever see. Every minute, every second, every frame is held as long as it should be and not a moment longer; the filmmakers and actors attain an economy of gesture that's truly transporting. What's on-screen at first seems plain, simple, even corny. But if you watch it all again, you start to grasp the intricacies of its construction, and see how one shot or moment mirrors or intensifies another. When Omar, Pops and Johnny leave the dressing room to head to the arena, and Johnny tells Omar, "You were born for this," the episode cuts to a close-up of the memory book (the cover says "Birthday") being opened in honor of Lights' 40th celebration. As the hero flips through the book, flashing back over his life, we cut back to Atlantic City. Omar's team enters the arena, and Omar himself enters the sacred mental space that Lights warned him about earlier when he led the young fighter into a supply closet, turned out the lights and told him that when you enter the ring (literal or figurative) you leave everything else behind -- home, money, family, friends. It's just you and your opponent.

As we look into Lights' face as he leafs through the birthday book, savoring memories that will one day fade from his mind, we realize who his greatest opponent really is.