Innovation and education won't save our economy 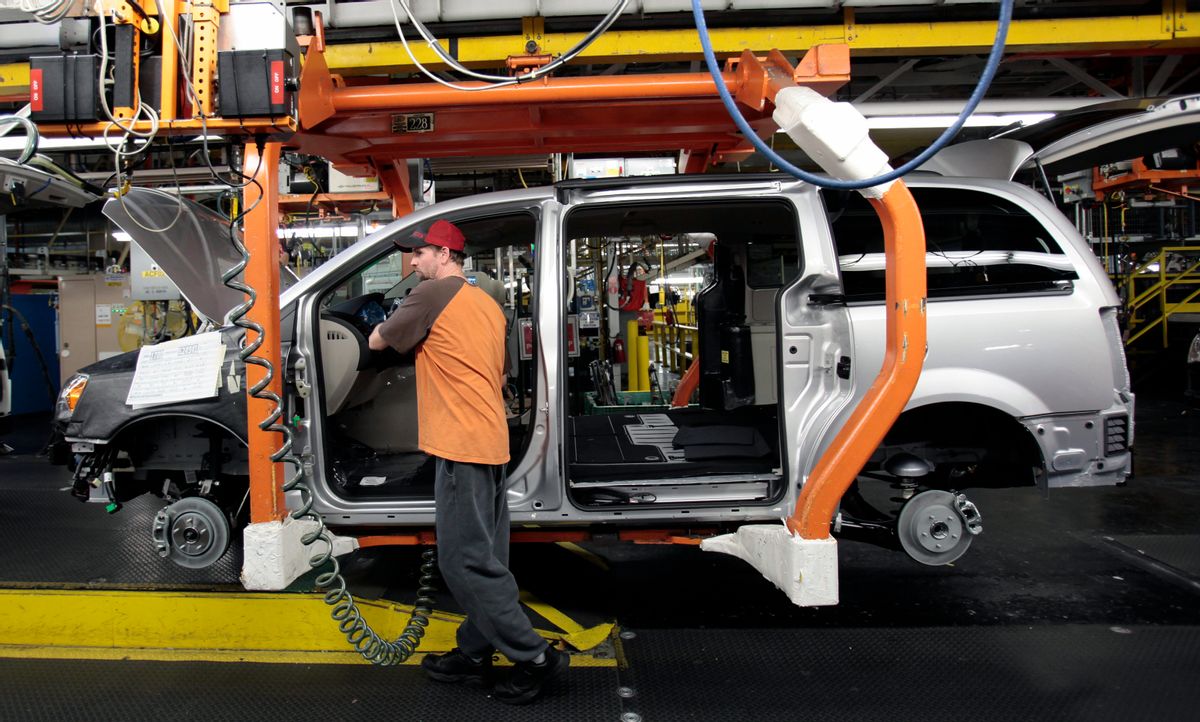 A Chrysler auto worker is seen working on a partially assembled Chrysler minivan on the assembly line during the production launch of the new 2011 Dodge Grand Caravan's and Chrysler Town & Country minivans at the Windsor Assembly Plant in Windsor, Ontario January 18, 2011. Chrysler Group Chief Executive Sergio Marchionne vowed to keep the automaker on top of the minivan segment in the North American market and said the company will develop a new type of minivan by 2014. REUTERS/Rebecca Cook (CANADA - Tags: TRANSPORT EMPLOYMENT BUSINESS) (Reuters)
--

We’ve heard it a thousand times, from American CEOs, pundits and politicians. And we’ll probably hear it again from President Obama, in his State of the Union address. The U.S., we are told, is losing its manufacturing industries to competitors like China because America is falling behind in innovation and education.

U.S.-based multinationals are not transferring production to China and other countries because those nations surpass the U.S. in innovation. The U.S. remains the leader in global innovation, with a sophisticated system of creative interaction among universities, business, venture capitalists and government. Other countries are trying to catch up, but that is nothing new. China recently alarmed many Americans with its policy of "indigenizing" innovation. But ever since the 1970s East Asian and European countries have been trying to create their own artificial "Silicon Valleys," usually with limited success despite huge investments.

It will be years if not decades before the flow of inventions and intellectual property across the Pacific reverses its course, if it does at all. Indeed, the piracy of American intellectual property, tolerated by the Chinese dictatorship as part of its industry-poaching national development policy, is itself testimony to the superiority of America’s innovation policies. If China could compete with the U.S. in innovation, it would not need to steal.

The claim that America’s K-12 system is inferior to that of other industrial nations is another myth whose purpose is to divert the attention of the American public from the real reasons for the offshoring of U.S. industry. Much has been made of the fact that, according to the Program for International Student Assessment (PISA), the U.S. ranks 12th in reading, 17th in science and 25th in mathematics. But the countries at the top of the list in 2009 -- Korea, Finland, Hong-Kong China, Singapore, Canada, New Zealand and Japan -- tend to be small or homogeneous or both.

The overall PISA scores of American students are lowered by the poor results for blacks and Latinos, who make up 35 percent of America’s K-12 student population. Asian-American students have an average score of 541, similar to those of Shanghai, Hong Kong, Japan and South Korea. The non-Hispanic white American student average of 525 is comparable to the averages of Canada (524), New Zealand (521), and Australia (515). In contrast, the average PISA readings score of Latino students is 446 and black students is 441.

Unlike Asian immigrants, many of whom are college-educated professionals, Latino immigrants tend to be less educated than the American average. And both Latinos and blacks are disproportionately poor. American students in schools where fewer than 10 percent of the students needed subsidized lunches score 551 on average -- above the average of any of the 34 developed countries in the Organization for Economic Cooperation and Development (OECD). Americans in schools where at least 75 percent of students qualify for free or reduced-cost lunches average 446, second to last among students in OECD countries. America’s public school system works quite well, for non-poor native students. It is overwhelmed by a disproportionately black poor population, which suffers the legacy of centuries of discrimination, and a disproportionately unskilled and illiterate foreign-born population. Instead of scapegoating America’s K-12 schools, we need to combat family poverty directly, by means of job creation programs and a living wage, while admitting fewer poorly educated immigrants.

As for college, the claim that Americans must catch up with the more advanced Chinese is absurd. Chinese students yearn to study in American universities -- not vice versa. Twenty-five percent of Americans graduate from college, compared to only 5 percent of Chinese. Yes, that’s a large number in absolute terms, given China’s population. But American CEOs who offshore production have no right to complain that too few Americans are going into science and engineering. Why should young Americans commit career suicide by entering occupations that are going to be offshored?

According to one trade expert in Washington, who spoke to me on condition of anonymity, Chinese government subsidies to individual American companies can amount to as much as 70 percent of the cost of a product. China’s artificially undervalued currency amounts to a government subsidy to Chinese-based manufacturers of around 30 percent. On top of the currency subsidy, the Chinese dictatorship often offers financial subsidies and gifts of free land and facilities that can amount to as much as 40 percent. China can afford to spend money on this lavish scale because it deliberately suppresses the consumption of its underpaid and unfree workers and controls investment decisions by its banking sector, while accumulating enormous surpluses from its artificially maintained trade deficit with the U.S. In other words, China recycles money spent on imports by American consumers to poach the factories of American producers.

How many American CEOs boast about how their companies have been bribed or pressured by the Chinese government into producing inside China’s borders, hiring Chinese workers and transferring American intellectual property to Chinese corporations? General Electric CEO Jeffrey Immelt, the new head of President Obama’s economic advisory council, has made news for calling on companies like his to source more production in the U.S. He has broken with the conventional wisdom in arguing that the U.S. cannot flourish as a post-industrial service economy. And yet in a recently published Op-Ed in the Washington Post, Immelt did not mention Chinese subsidies or China’s currency tariff. He warned against American protectionism. He did not write a word about Chinese currency protectionism and other forms of Chinese mercantilism. It cannot be that he is unaware of them. In recent years GE has been expanding its presence inside China.

Why has the Obama administration in general, unlike some members of Congress, shown such a lack of urgency in addressing the issue of China’s currency tariff (itself only one of many instruments of Chinese economic nationalism)? One answer is suggested by a recent Financial Times article by Alan Beattie: "While the drive for currency legislation is noisy and conducted by practiced lobbyists in industries in steel and textiles that have canvassed for protection against exports, many US multinationals are far more interested in investing in China than exporting there." (emphasis added).

It’s a sad reflection on America’s corporate leaders that instead of being honest with their fellow Americans about the true reasons for offshoring, they tend to blame America first, peddling the insulting story that we Americans are not innovative or educated enough to compete with a poor, dictatorial nation like China. The blame-America-first story is peddled as well by American politicians who receive corporate campaign donations and, after retirement, lucrative corporate board memberships, pundits who get paid on the corporate speaking circuit and academic economists with big corporate consulting contracts. These co-opted opinion leaders join the executives of U.S.-based multinationals in trying to divert the attention of the American people from the mercantilist industrial policies of countries like China that do not practice America’s version of free-market capitalism and have no intention of doing so.

To be sure, the United States can always benefit from more public and private investment in innovation. And raising the educational standards of Americans of all classes and races should be a priority, for reasons having nothing to do with trade.

But don’t be fooled. Even if the U.S. population as a whole led the world in PISA scores, many U.S.-based multinationals would still be blackmailed or bribed by the Chinese dictatorship. Companies would continue to transfer production as a condition of gaining access to the huge, informally protected Chinese consumer market, or to take advantage of Chinese government subsidies that are passed out on a scale that America’s federal, state and local governments cannot and should not compete with.

Innovation and education are red herrings, tossed out to distract the American public from the real problem. If we were serious about competing with China, we would copy their tactics. Unlike China, the U.S. has not run chronic trade surpluses and cheated its people of wages and savings in order to amass vast funds that it can use to shower subsidies on particular companies. The U.S. government doesn’t have the money to lure multinationals to America or to keep them at home with gargantuan bribes.

But the U.S. could emulate China by telling corporations that if they want access to America’s consumers they must produce at least a portion of the goods sold in the American market within America's borders and employ American workers. If doing what China does already is incompatible with America's obligations under the World Trade Organization, then so much the worse for the WTO. Why should America follow the rules while China cheats?

The argument that other countries would retaliate by insisting on similar in-market production ignores the fact that most of America’s industrial competitors like China have similar informal policies already, at the expense of America’s productive base. The U.S. would not be launching a trade war. It would finally be defending itself, in a decades-old trade war in which, to date, it has remained disarmed.

An old saw has it that you know politicians are lying if you can see their lips moving. That needs to be updated. Nowadays if they say that the U.S. must respond to the offshoring of American industry to China and other state-capitalist countries by investing more in innovation and education, you can be sure that American politicians are lying.