"True Grit," "Winter's Bone" come out strong, while "Inception" and Ben Affleck get left in the dust 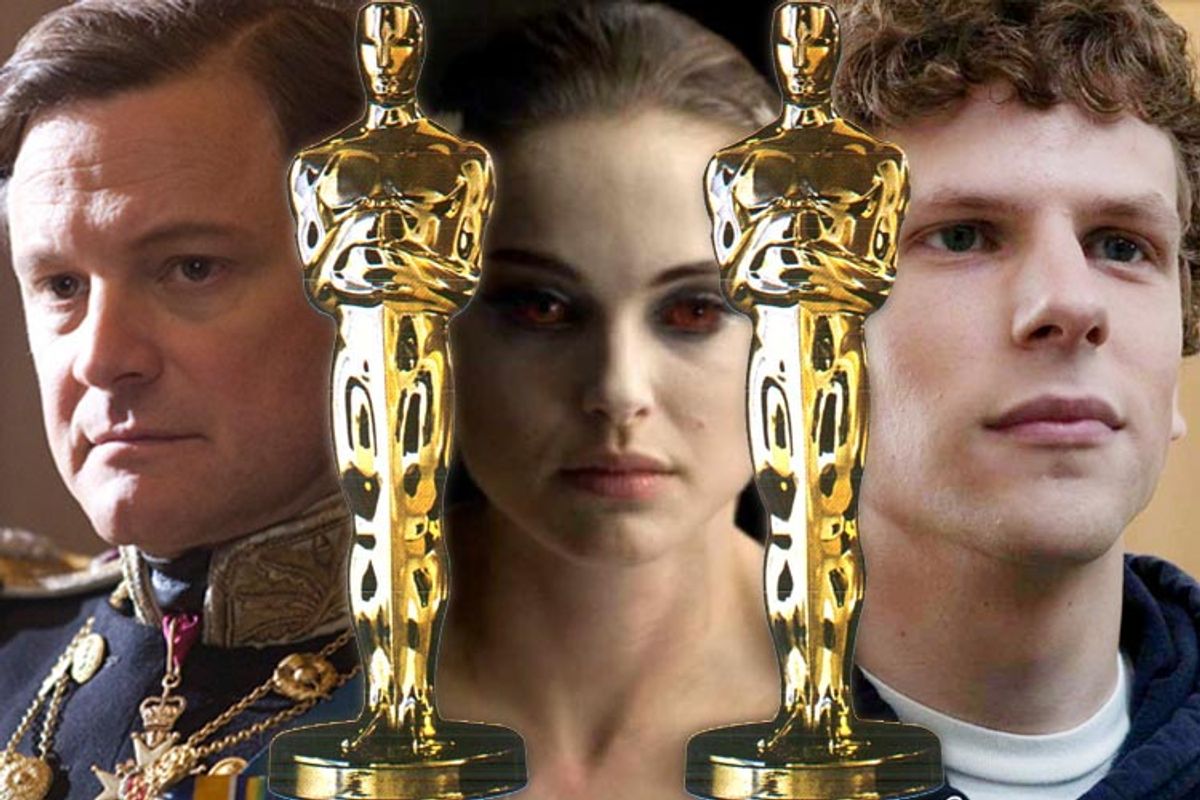 If the Kabuki theater of the 2011 Oscar race is to yield any major surprises -- let alone any of the half-baked sociological talking points so beloved by the media -- that wasn't evident in Tuesday morning's nominations for the 83rd Academy Awards. In fact, if there's anything strange about this year's Oscars, it's how predictable they appear.

Conventional wisdom has held for months that "The King's Speech" and "The Social Network," a pair of handsome and talky comedy-drama blends with biographical and historical roots, were the best-picture front-runners, and so it appears. (Furthermore, the latter will win, and I don't care how much tea-leaf reading to the contrary you hear in coming weeks.) Best actress is perceived as a race between Annette Bening's lesbian mom in "The Kids Are All Right" and Natalie Portman's demented ballerina in "Black Swan," and best actor as a race between Colin Firth, for his richly sympathetic portrayal of the stuttering King George VI in "The King's Speech," and, well, nobody in particular. Done and done.

That's one side of the story. The other side is that 2010 looks in the rear-view mirror like a terrific year for moviemaking, at least if you're using a Venn diagram that extends from high-middlebrow Hollywood fare like "King's Speech" and "Social Network" out to the indie-film fringes. Attendance was down a tick for the biggest "tentpole" productions last year (revenues increased a little, almost entirely because of the larger ticket prices for 3-D releases), but there was a smorgasbord of interesting mid-budget and low-budget films aimed at a blue-state, metropolitan audience. This year's Oscar nominees are light on huge, expensive spectacles ("Inception" and "Toy Story 3") but rich with provocative and engaging pop entertainments, from the marriage melodrama of "The Kids Are All Right" to the cinematic showboating of "Black Swan" and "127 Hours" to the wrenching, hardscrabble Americana of "Winter's Bone" and "Blue Valentine."

The 2011 Oscar race so far offers further evidence of how far the Academy's collective opinion has drifted away from that of the mass audience. Film critics have traditionally approached the Oscars as a bear-baiting ritual that allowed them to deride the stodgy tastes of Academy members (often visualized as a pack of cranky Jewish retirees in golf pants). But given how closely the two groups mirror each other these days, it's time to retire that one.

Sure, "Inception" and "Toy Story 3" were both nominated for best picture and are two of the year's top box-office films. But both got significant love from critics -- and furthermore, if you think either has a shot at the big prize, you simply haven't been paying attention. Those made the list, arguably, to balance out the Academy's evident preference for more indie-flavored fare like fellow best-picture nominees "The Kids Are All Right," "Black Swan," "127 Hours" and "Winter's Bone." As I note below, Ben Affleck's "The Town," a mainstream hit touted as an Oscar contender in some quarters, was pretty well ignored. "Secretariat," a horsey nostalgia exercise that performed well in Middle America but did no business in cities, was perhaps envisioned by its studio as this year's answer to "The Blind Side," but garnered no major nominations.

It's not as if "Social Network" or "King's Speech" are art-house obscurities or anything; the first has grossed almost $100 million and the second is at $50 million and counting. That makes them look like "Gone With the Wind" compared to, say, "The Hurt Locker," whose domestic returns of $12.6 million almost certainly made it the lowest-grossing Oscar winner in history, even if you adjust for inflation or process it through a time machine. But like almost every recent Oscar winner, they're pictures that have played strongest with college-educated audiences on the coasts and in big cities, and have made relatively little impression in the multiplex heartland. They're movies made by and for a certain class of people, a difficult concept to conjure with in a nation where we pretend social class does not exist. They're Oscar movies -- and the more that category seems to change, the more it stays the same.

Here are today's major winners and losers, as I see them.

"The King's Speech" -- With 12 nominations, including best picture, best director for Tom Hooper and acting nominations for its three featured performers (Firth, Geoffrey Rush and Helena Bonham Carter), this appealing yarn about George VI, aka Bertie, and his Aussie speech therapist will now be seen as Oscar co-favorite. I'm not buying it, at least not yet. I foresee a split ticket, with "Social Network" winning best picture and best director, but "King's Speech" potentially winning two or even all three of the acting awards.

"True Grit" -- The surprise chick flick of the season -- and if you think I'm cracking a joke, you haven't seen it -- piled up a bunch of nominations, but most likely won't win in any major category. In the upside-down star-system logic of Hollywood, Jeff Bridges was nominated for best actor in what is clearly a supporting role, while youthful star Hailee Steinfeld, who's probably on-screen for 80 percent of the film's running time, won a supporting-actress nod.

"The Fighter" -- Yes, Mark Wahlberg's quiet starring role as small-town palooka Micky Ward was passed over, which is kind of too bad. But with a best-picture nomination and supporting nods for Christian Bale, Melissa Leo and Amy Adams -- all of whom were fantastic -- this richly enjoyable yarn of downscale '90s America may get a second look from viewers who stayed away the first time around. Bale and Leo are seen by many as favorites, but the "King's Speech" upsurge may swamp them.

"Winter's Bone" -- Debra Granik's devastating crime saga set in the Ozarks came out early in the year and did modest business. But critics didn't forget it, and neither did the Academy, which delivered a best-picture nomination, an acting nod for young star Jennifer Lawrence, and a supporting-actor nomination for the menacing John Hawkes.

"Gasland" -- Oscar's documentary category often tracks closely with rising social and political issues, and this relatively obscure work from activist filmmaker Josh Fox explores "hydrofracking," a controversial and destructive method of natural-gas extraction that has rapidly become a hot environmental cause in the Northeast.

"Exit Through the Gift Shop" -- Is the debut film from shadowy British artist Banksy a genuine documentary or an artfully constructed fraud? I've never thought it was an interesting question -- since the movie is hilarious, and poses the same philosophical questions about art and commerce, either way -- and in delivering an Oscar nomination, I guess the Academy agrees.

"Dogtooth" -- This dark and disturbing allegory from Greek filmmaker Giorgios Lanthimos looked like the longest of long shots for foreign-Oscar consideration. But persistent critical adoration put it on the map, and here it is. (I'm not the biggest fan -- but I'll deal with the intriguing list of foreign-film nominees in due course.)

"The Social Network" -- Don't get me wrong; I still think this is the best-picture favorite, and that David Fincher will also go home with the best-director statuette. But it received fewer nominations than either "King's Speech" or "True Grit." Jesse Eisenberg won't win, and neither Andrew Garfield nor Justin Timberlake were nominated for their outstanding supporting performances.

"Inception"--  Despite a world-conquering box-office take of $823 million and the adulation of countless fans, Christopher Nolan again finds himself a bit player in the Oscar race. "Inception's" nods for best picture and original screenplay are basically affirmative action for commercial cinema. I don't think it will win in either category, and Nolan himself was passed over in the directing category. Various commentators are acting like a surprise -- at this point, it's more like a ritual.

"Blue Valentine" -- Maybe that NC-17 controversy really did hurt. Michelle Williams was nominated for best actress, but costar Ryan Gosling was passed over, and Derek Cianfrance's gritty marriage drama, despite all the critical raves, was otherwise ignored.

"127 Hours" -- Sure, both Danny Boyle's film and star James Franco were nominated. But a muddled critical reception, mediocre box office and the general sense that Franco is an overexposed hipster avatar have rendered this brutal, effects-driven freakout an Oscar-race afterthought.

"The Town" -- Ben Affleck's Boston bank-heist thriller was well reviewed early in the fall, but all along it was just a dumbass pop film that was slightly better crafted than others of its ilk. Jeremy Renner's supporting-actor nomination is richly deserved, but Oscar otherwise gave the cold shoulder to this forgettable vanity project.