The famously hairy-legged actress shows off a shaved new look. Has she caved to popular pressure? 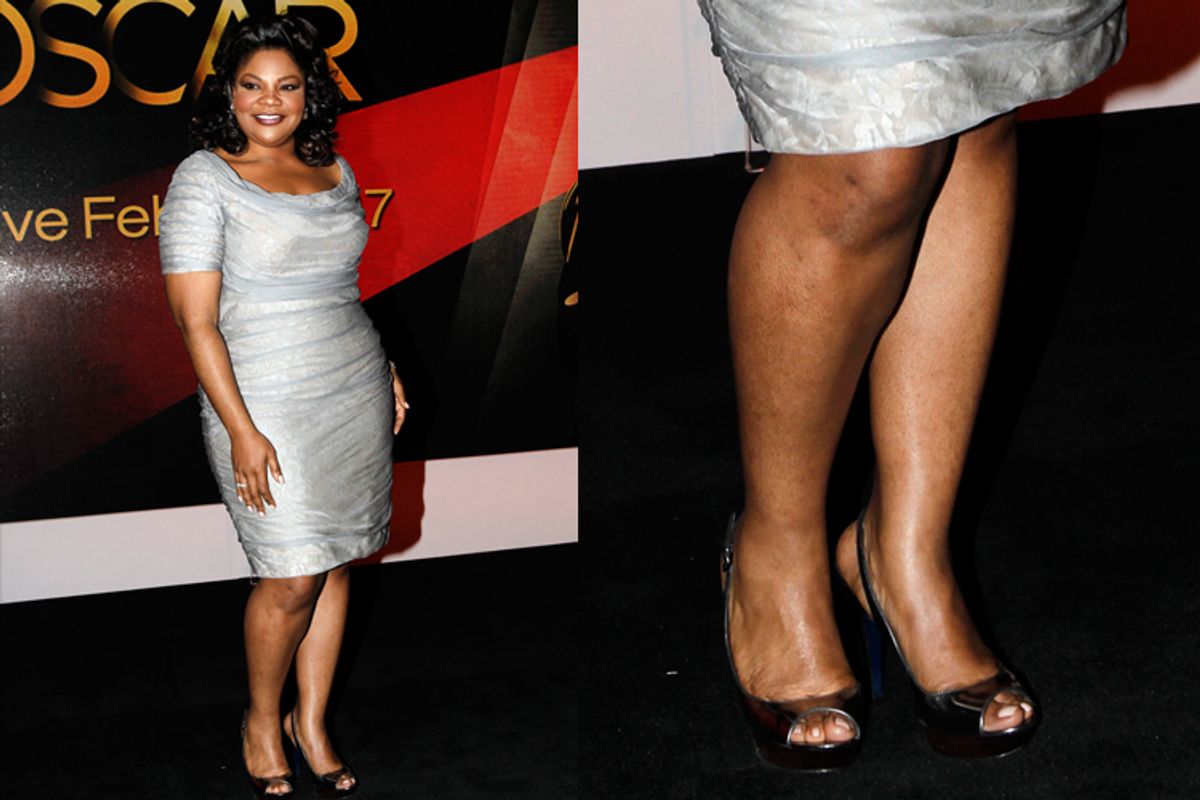 Mo'Nique after the announcements of the nominations for The 83rd Annual Academy Awards on Tuesday.
--

When last year's supporting actress winner Mo'Nique revealed the 2011 Academy Awards nominations early Tuesday, there was really only one shocking surprise of the morning. On a day when everybody knew Colin Firth, Natalie Portman and "The Social Network" would be getting their due, the real headline grabber turned out to be the announcer herself. Film critic Michael Sragow broke the news: "Apparently Mo'Nique has gone back on a long-held personal policy and shaved her legs." And the Daily Mail breathed an editorial sigh of relief that Mo'Nique had "finally ... upped her grooming regime and proudly paraded her hair-free legs." Our long national nightmare is over!

A year ago, right around the time Mo'Nique was picking up every award in cinematic creation for her monstrous turn in "Precious," she was also busily raising eyebrows for daring to flaunt her downy gams on the red carpet. And five years ago, during an appearance on "The View,"  she proudly hiked up her dress, stating she was going to "show America what a real leg looks like." She did however at least cop that she shaves under her arms to avoid "stink."

It's not surprising, when you consider how swiftly the Brazilian went from a racy walk on the porn star side to yet another all but required element of femininity, that not defuzzing one's legs would be viewed as downright radical. Hair? On a female mammal's body? It just seems so ... unnatural. Even as Mo'Nique was tearfully accepting accolades for her extraordinary work, Internet commenters were dismissing her below the knee look as "disgusting," "gross" and "nasty."  So when she trotted out yesterday in a ladylike dress that proved, as one blog cheered, she'd "finally euthanized her inner Boogawolf" and left behind "all that 'Black women don’t shave' nonsense," the Nair police breathed a sigh of relief. Or as the Blemish dryly remarked, it must be "shedding season."

Perhaps Mo'Nique grew tired of being one of the few stars willing to show America what "a real leg" looks like. Maybe she was sick of hearing how disgusting she apparently is. She couldn't have been thrilled when earlier this month, Jamie Foxx drew gasps from Jay Leno's audience when he showed a photo of Mo'Nique's legs and deadpanned, "I'd like to braid that up."

She has, of course, had her supporters. As a commenter on the Daily Mail asked, "Isn't it time we let go of the cookie-cutter mentality?" But that's hard to do when it's so deeply ingrained. When a few months ago I spied a pair of toned, tanned and unmistakably hirsute legs in a women's locker room, I almost didn't recognize the sight. Oh right, I had to remember, those are legs. They're not disgusting or weird or gross or unfeminine or in need of "grooming" as soon as they've got a little growth on them. And anyone with that kind of judgment about a very arbitrary beauty standard should really take a long hard look at his or her own messed-up body issues before dissing anybody else's follicles.

If the actress has decided that, for now, she'd like to take a walk on the smooth side, it doesn’t automatically represent a caving to pressure or oppression by the patriarchy. But shouldn't the option of nonconformity exist as well? And why should a little bit of body hair -- on the legs, under arms, or yes, even the Tajazzle zone -- be considered so radical, so appalling, so threatening? It's just hair, for God's sake. And a woman's right to experiment with it shouldn't end at her chin line.