Oprah can still bring this gay man to tears

I have trouble relating to her now, but last night's show reminded me of how much she's done for the LGBT community 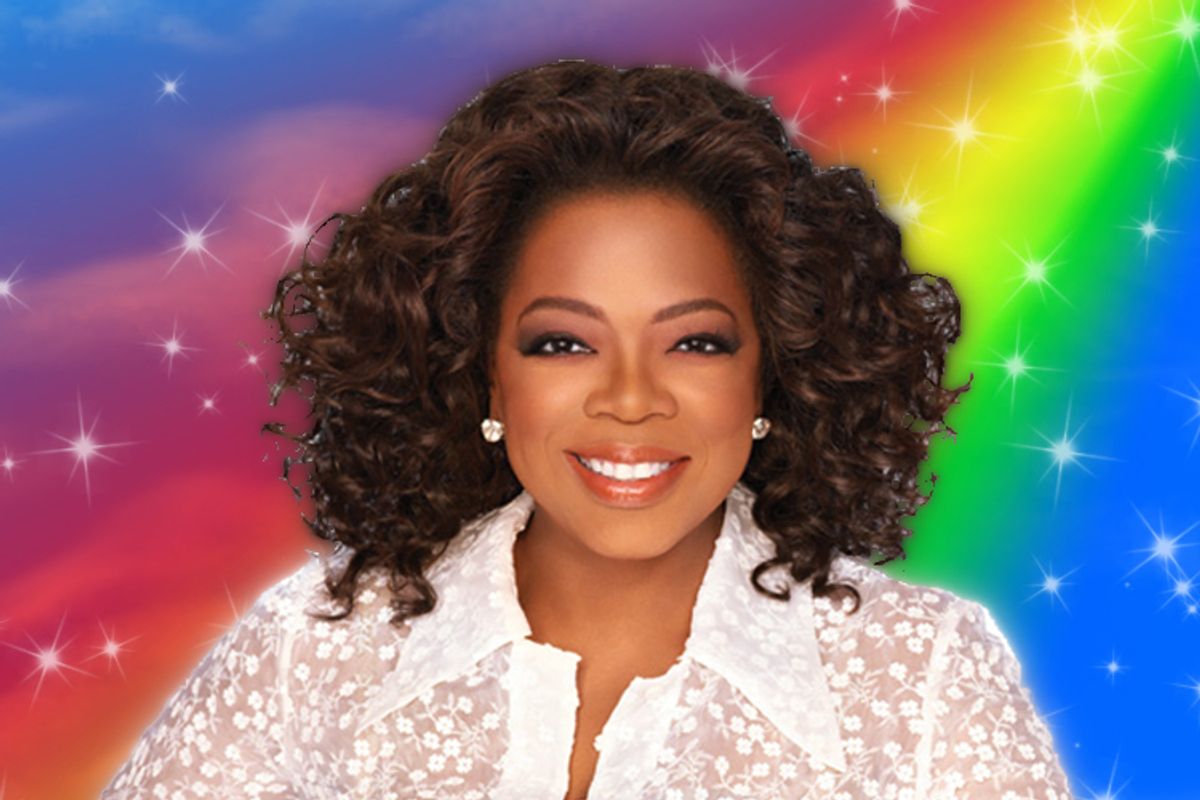 I have to say upfront that I haven't been able to look Oprah in the eye since "The Secret." As a struggling artist in Los Angeles, I couldn't turn around after that book was on her show without someone telling me that I needed to visualize my prosperity, read the book, or watch the DVD. I did watch the DVD, and let's just say it didn't match the spirituality and belief system of this gay Episcopalian socialist. I began to see Oprah as living in a rarefied air, just one billionaire talking to another in her interview with J.K. Rowling, and a bit too enmeshed in a system I was finding more and more distasteful: namely, capitalism. I haven't gotten more mellow and conservative with age, I've become more liberal and downright revolutionary. I'm sure if it weren't for my bad knee I'd be marching somewhere, right?

As a Chicago native, I remember when going to the "Oprah" show was something you did for an afternoon's pleasure. If my sister was coming "downtown," as all suburbanites call the city in Chicago, we'd call WLS and see if we could get tickets to see Oprah. A nice lunch at the Wishbone down the street afterward, and she'd still be able to get on the Stevenson expressway before rush hour to get home to her husband and kids. I was on camera a few times with Oprah too, asking questions, and back then she would shake everyone's hand in the audience after a taping. Oprah was a hometown girl and more accessible in the late '80s and '90s, before she was OPRAH and tickets were as hard to get for her show as they were alleged to be for the Bozo show when I was a kid. But times change, and I'm in Los Angeles now, and she has an empire, so she just isn't as much "mine" as she once was. I don't watch the show much, but this last season has sucked me in, and she's on the DVR now, which is much easier to do than it was to program my VCR back in the day.

Good lord. "Back in the day"? I suppose it's 25 years later whether I like it or not, and I'm typing on my computer instead of writing in my Moleskine journal. My dear friends, the comedy duo Frangela, used to use the phrase "There was a time in this country" on their radio show to hilarious effect. They, and I, and I suppose all of us who have found ourselves in middle age, look at the world through bifocals and see how things have changed, for better and for worse. And last night, Oprah had a show that touched me in ways I couldn't have imagined she still could with "Coming Out on the 'Oprah' show: 25 years of Unforgettable Guests."

Oprah began the show by quoting a statistic that in 1987, 70 percent of Americans thought homosexuality was a sin. On one hand, I found that shocking; on the other, I remember 1987 all too well. In 1987, I was 22 years old, drifting in and out of college, and grappling with my own sexual identity as it related to my family in general, and my father specifically. My father had gotten to a point since I came out in high school where he saw my "lifestyle" as my "choice," one that he hid from others and preferred I not share with anyone outside of our family. What he didn't realize then was that he had raised a fighter, one who took his staunch liberal values to heart. My father and I were more alike than either of us ever realized, and it breaks my heart that he died too soon, in 1988. But because he was a decent if flawed man, the last thing he said to me, on St. Patrick's Day 1988 when neither of us knew we would never see each other alive again, was "I love you." In the last 22 plus years since his sudden death in June of '88, I've often wondered where our journey would have taken us had we been blessed with more years together. What would he have thought when Dick Gephardt, a man he knew and respected, was featured in the documentary "For the Bible Tells Me So" in 2007, talking about his lesbian daughter?  Knowing my father, a man hungry for growth and new knowledge, he would be a member of PFLAG at this point. I'll never get to find out.

But this is about me and Oprah, and last night, she provided me with a show that spans my adult life, and through her clips from the last 25 years, I could remember what it was like to have those haircuts and wear those clothes, and what it was like to assume that most of America couldn't stand me. I remember Greg Louganis coming out as gay and HIV positive on her show, and I remember going to the bookstore to buy his book the next day. (Not ordering it on Amazon.com, mind you, but going to an actual independent bookstore to buy it.) I remember her show about a small town in the South where the powers that be drained a pool and closed it down because a man with AIDS had gone swimming there. A dear friend of mine came out when she was married to a man and had children with him, and she watched the tape of an Oprah episode about a woman in a similar situation to help her get through it. On last night's show, one of the guests was a gay man, now happily married and living with his husband in Hawaii, who at the age of 12 had seen Greg Louganis' episode in 1995. This man, just a boy in 1995 (!), choked back tears as he tried to express to Oprah what Louganis' coming out had meant to him. Then, when Louganis took to the stage to surprise the young man, he and I dissolved into tears. In this day and age when we are learning so much about teenage bullying and suicide, just to see a gay man say he survived being an adolescent is worth cheering.

This is what real television can mean to real people, and it's precisely why Oprah is a gay heroine to me. Although she's not gay herself, she has never assumed that heterosexual privilege meant she couldn't put herself in another's shoes. As an activist and liberal, I don't think it's enough to have gay friends, or claim to have gay friends, and not do anything about the iniquities we suffer under (Sarah Palin, anyone?). In her own billionaire way, Oprah has managed over the last 25 years to be quite revolutionary.

As our respective communities are wont to say, "You go, girl!"