"Cinderella Ate My Daughter": The evil reign of pink princesses 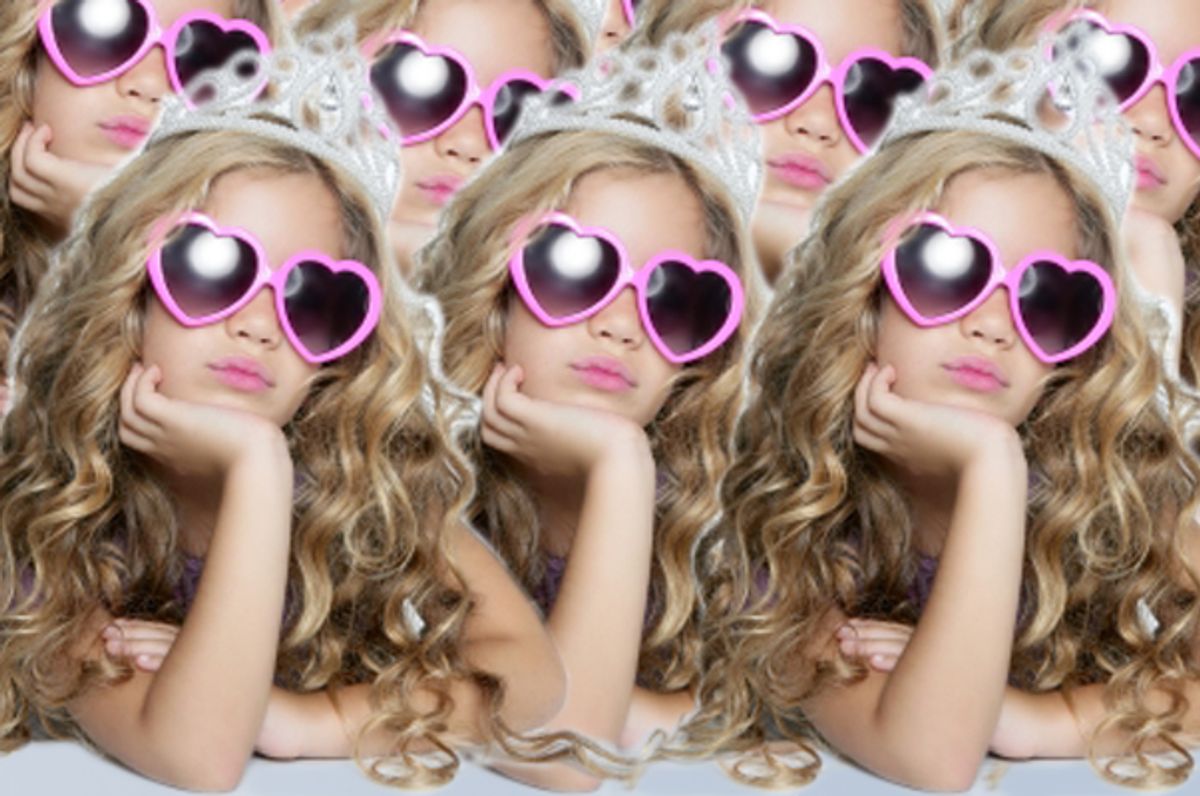 Nothing can quite rock a woman's worldview like navigating through the New Girl Order with her own offspring. Peggy Orenstein has been writing about girls and women's issues since the 1980s. In her books the best-selling author has explored the minds of "Schoolgirls" and the feminist state of "Flux." But in her already much-praised new book "Cinderella Ate My Daughter: Dispatches From the Front Lines of the New Girlie-Girl Culture," the mother of 7-year-old daughter Daisy investigates firsthand the market domination of princesses and pink, the slutification of tweens, and how social networking became the favored tool of a new generation of Mean Girls. It's a gripping, hilariously horrifying account of battling for your child's soul in the toy aisle, one that excoriates consumer culture while sympathizing with parents trying to make sense of it all.

As a mother of two young Barbie-loving daughters myself, I was riveted by Orenstein's blend of self-deprecation and outrage -- and eager to talk to her during the New York City leg of her book tour about baby princesses, the insidiousness of pink and, of course, Hannah Montana.

One of the things that really distinguishes your book from so many others out there is that you manage to talk frankly about the pitfalls of raising girls right now without scolding parents.

That was very conscious. I didn't want another book out there to make parents feel bad about themselves. I've tried to be very honest and personal in my writing, and not distance myself as an "expert." When you read Simone de Beauvoir, knowing that in her personal life she made some foolish choices, don't you wish that was in her work? I'm very much a fellow traveler on the journey. Even the title of the book is supposed to let you know I don't have all the answers. Parenting is very much in the moment, and we make a lot of our choices on the fly. I just want to tell parents what's happening out there, so they understand what's going on with that 21-piece Disney princess makeup set.

It seems that even for a veteran on the subject of  girls, you were blindsided by a lot of what you encountered out there with your own kid.

Oh yeah. Everything is changing so fast. When I wrote the initial New York Times story about princesses, I was concerned that maybe by the time the book came out it wouldn't be as relevant. Instead it's even more resonant.

You write a lot about the explosive rise of the Disney princess industry, and of the proliferation of  "girl" versions of everything --  and how it winds up confining them in "the pink box." It feels like this is really a story about how girls are being groomed from birth to be consumers.

Even before they're born! Another writer told me that when she got her sonogram recently, they didn't tell her, "It's a girl." They said, "It's a princess!" So now you're already a princess while you're still in the womb. And then you hear for years, "You're so pretty," until suddenly you're not pretty enough. But you know, maybe if you buy these things to fix yourself you'll be pretty.

Even 50 years ago, children would get a gift or two on Christmas or their birthdays. They weren't spending and shopping all year round. And I think parents are getting really fed up with this stuff.

And yet, parents are the ones paying for all those "Diva" onesies. Why do adults buy into it?

Because they think it's ironic and funny? Because it seems harmless? A generation ago, your mother would have been horrified at a T-shirt that said, "Spoiled." Why on earth would you want your child to be spoiled?

Do you think some of this "Spoiled" culture is a reflection of a growing narcissism in general?

So what do we do to protect our daughters from becoming princess bratz?

We all live in the world. There was a story in the Times a few months ago about how little girls who watch "Hannah Montana" are more likely to bully, but kids whose parents try to make them behave more age appropriately are likelier to be bullied. You don't want to have either of those scenarios. Our job is to raise our daughters to be thoughtful and inquisitive and ask questions, and I can see already the ways my 7-year-old is doing that.

There's incredible plasticity in developing minds. They get progressively rigid as they get older. So if you as the parent are saying no to these messages -- not all the time, because you have to say yes sometimes too -- and setting the right limits, it will have an effect.

But people will ask, what's the harm of a little dress-up and fantasy? Isn't that normal?

Disney will tell you that their princess line is "age appropriate" and they are absolutely right. They swoop in right at the age boys and girls are figuring out they're different. But you can celebrate being a girl in different ways. For Halloween this year, Daisy was Athena -- the goddess of war and wisdom.

I remember when I wrote "Schoolgirls," parents would tell me things like "I only let my daughter play with trucks." That's not the point! You don't want to send the message that things that are feminine don't have value. But stuff like royal play, with kings and queens and knights, is appealing to both girls and boys. It doesn’t have to be so narrow.

OK, I need you to tell me something good now. What gives you hope for our daughters? What's getting better?

Places like Salon. And Jezebel, and Slate. The fact that people are writing and having conversations about these issues. That's very important. My daughter Daisy, and how seeing smart and strong she is. The women I know who are complicated and conflicted and caring. That's what gives me hope.

I think of the food analogy too; 10 years ago, we didn't know what trans fats were or what was in school lunches. But because people wrote books and asked questions and got organized, things are changing. Now even McDonald's is pushing "healthier" menu options. And if we can make McDonald's blink, we can make Mattel and Disney blink too.