Rahm Emanuel is back on the ballot for Chicago mayor 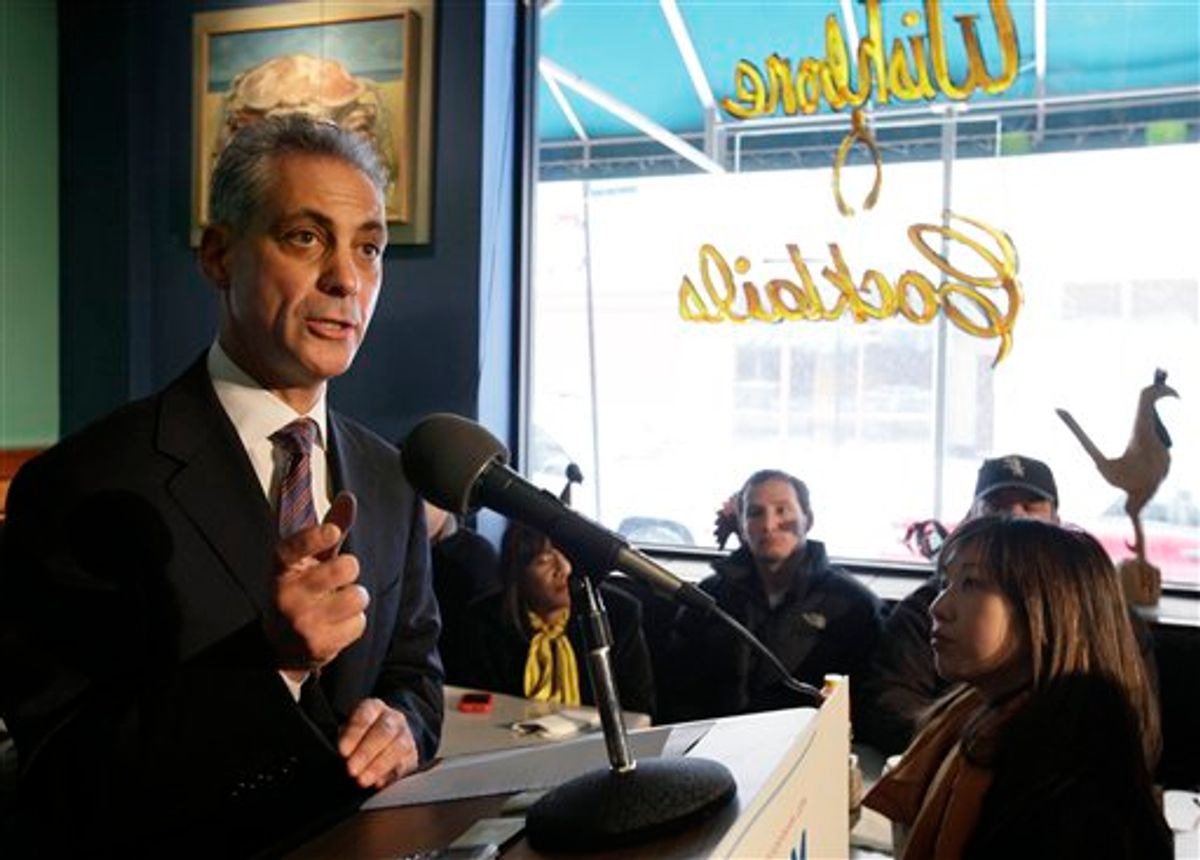 Former White House Chief of Staff Rahm Emanuel speaks after being endorsed by U.S. Rep. Mike Quigley as he awaits a ruling by the Illinois Supreme Court regarding his residency which could remove him from the ballot in the upcoming mayoral election, Thursday, Jan. 27, 2011, in Chicago. (AP Photo/M. Spencer Green) (AP)
--

The Illinois Supreme Court has put Rahm Emanuel back on the ballot for Chicago mayor.

Thursday's decision revives the campaign of the former White House chief of staff who was thrown off the Feb. 22 ballot by an Illinois appellate court for not meeting a residency requirement because he hadn't lived in Chicago for a year before the race.

Emanuel lived for nearly two years in Washington working for President Barack Obama until he moved back to Chicago in October to run for mayor.

In their appeal to the state's high court, Emanuel's attorneys called the appellate court decision "one of the most far-reaching election law rulings ever" issued by an Illinois court.

Rahm Emanuel pushed on with his campaign Thursday, including attending a planned a televised debate. But the real debate over his chances of becoming Chicago's next mayor went on behind closed doors.

If Illinois' highest court does not restore the former White House chief of staff to the ballot, Emanuel's other options such as a write-in campaign or an appeal to the federal courts appeared less promising.

"There are a lot of potential chess moves out there, but his best shot is with the Illinois Supreme Court," said Edward Foley, a law professor at Ohio State University who heads the school's election law program. Everything else, he said, "looks like a long shot."

Emanuel, who's ahead in the polls and has far more money than his competitors, has been fighting for two months to stay in the race after some voters alleged that he did not meet a requirement that candidates live in Chicago for at least a year before the election.

On Monday, an appeals court threw him off the ballot because he lived for two years in Washington working for President Barack Obama. Emanuel swiftly appealed to the Illinois Supreme Court.

If the high court does not restore his name, Emanuel could run as a write-in candidate. But even if he were to win, experts said, he might not be able to take office because he has not lived in Chicago long enough.

"That requirement would seem to be applicable whether you're listed on the ballot or whether you're a write-in candidate," said Mark Rosen, a law professor at Chicago-Kent College of Law.

The bottom line, said Chicago election attorney Adam Lasker, is that no matter how many people vote for Emanuel, it won't help him actually become mayor.

"I would say no matter what you do, I don't think you'll be able to take the oath of office," he said.

Late last year, the Chicago Board of Elections and a Cook County judge ruled that Emanuel was entitled to be on the ballot. Then the appellate court reversed that decision.

Emanuel, who moved back to Chicago in October to run for mayor, says he's always been a resident because he owns a house here, votes and pays taxes here, and only left the city at the personal request of the president.

The state Supreme Court could announce a decision anytime.

Emanuel has not said what he might do if the high court rules against him, whether he would pursue a write-in campaign, take his case to federal court or both. On Thursday, he said he is not huddling with his lawyers.

"Do I look like a huddler?" he said to laughs at a campaign stop. "I don't think I look a huddler, and I don't know what a huddler looks like. OK? And no, I'm not with my lawyers, I'm with the people."

If he does go to federal court, experts say, Emanuel's chances of success are not good.

Dawn Clark Netsch, a law professor and constitutional scholar who has blasted the appeals court decision, said she sees "no significant federal constitutional issue" that Emanuel could argue.

Ann Lousin, professor at the John Marshall Law School, said the federal courts might be an option if Emanuel could show that some kind of conspiracy deprived him of his federal right to due process. But, she added, she does not see any conspiracy.

Despite the uncertainty surrounding Emanuel, he was invited to a major televised debate sponsored by the Chicago Tribune, WGN and the City Club of Chicago.

But if Emanuel's candidacy remains in doubt, the news media are "going to be focused on this decision and how this plays out and much less on substantive issues," said Alan Gitelson, a Loyola University political scientist.

"The candidates needed to debate among themselves," Gitelson said. "And now there isn't a lot of room to do that."