Pick of the week: Your favorite teen soap -- on drugs! 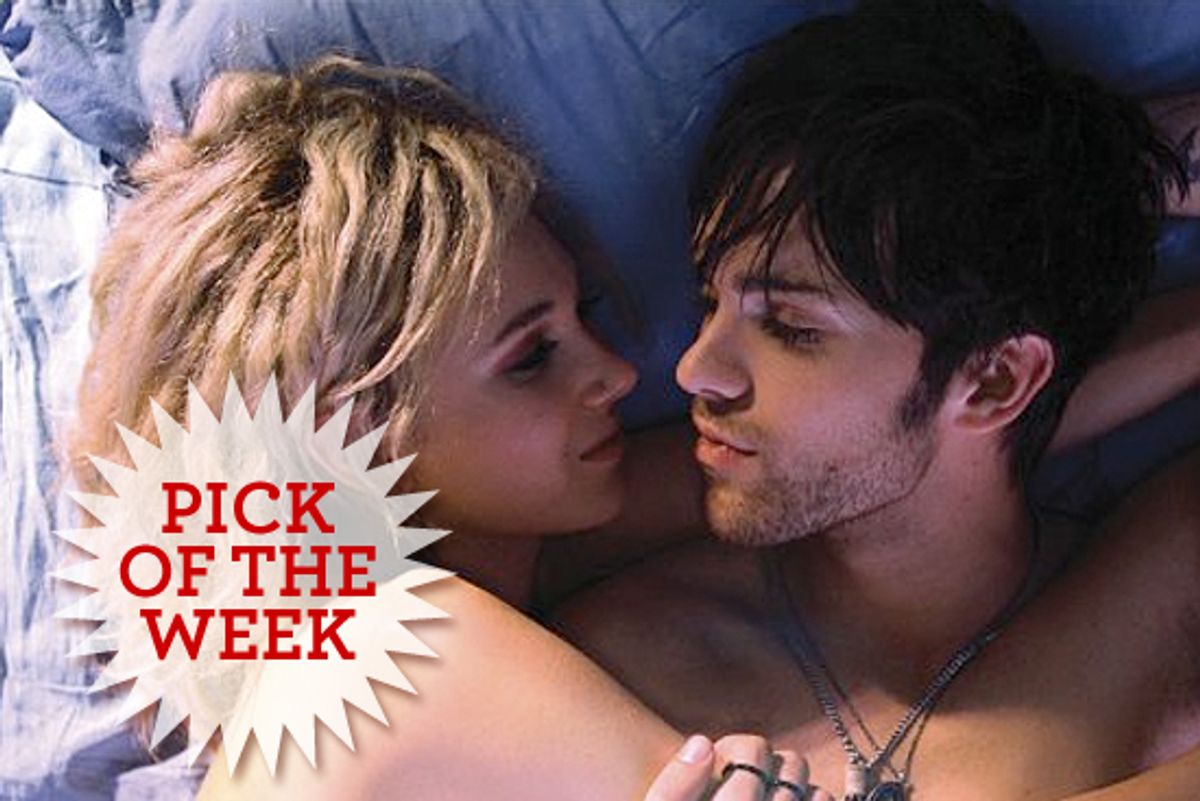 A delirious and lighthearted pop spectacle with a dark undercurrent of apocalyptic horror, "Kaboom" is about 95 percent of the movie that writer-director Gregg Araki's fans have been waiting for. Now, it's not like there are so damn many Araki fans out there at this point -- I probably know a lot of you personally, with your apartments in Silverlake or the Lower Haight, your exhaustive collections of offbeat pop music and your dioramas involving Japanese monster figurines. So it probably behooves me to explain the deal with this giddy, hilarious and stylish SoCal fever dream, which is partly glossy teen fantasy and partly nostalgia for a future that never quite got here.

Araki has described his ultra-indie mid-'90s films, like "Nowhere" and "The Doom Generation," as being episodes of "Beverly Hills 90210" on acid. Improbably enough, he has circled back to that early-hipster aesthetic, reclaiming it for a decade of sexting and reality TV and borderline-obscene teen soaps, and it's almost completely delightful. For all its cheerful, all-directional raunch, "Kaboom" is far more wholesome than MTV's suddenly notorious "Skins." Smith (Thomas Dekker), Araki's dirty-angel polysexual hero, is searching for true love amid the eroticized, desolate landscape of his unnamed Southern California college campus, and at least part of him understands that all the hot surfer guys and demented lesbian witches and creepy late-night intruders in animal masks are just obstacles on his pathway toward Mr. and/or Ms. Right.

"Kaboom" is a deliberately unstable fusion of every teen-oriented prime-time soap you can remember from the last 15 years, and others you can't, with more than a dash of creepy, hidden-reality paranoia out of David Lynch or David Cronenberg thrown in. Araki and cinematographer Sandra Valde-Hansen foreground the actors, in bright light and primary colors, and make the dorm rooms and cafes and nightclubs behind them seem dim and distant, like dream-world locations. The balance of absurdity and delicacy, of trashy and sweet and downright disturbing, is not quite like anything else I've ever seen. (OK, here's a parallel, in idiosyncratic ambition if not in tone: "Brick," the Hammett-goes-to-high-school indie starring Joseph Gordon-Levitt.)

Smith wonders whether his ultra-straight surfer roommate, Thor (Chris Zylka), may be hiding something. After all, Thor has a closet full of color-coordinated flip-flops! Even Smith's smartass lesbian friend Stella (Haley Bennett) pretends to be impressed: "Next to putting a dick in your mouth with Lady Gaga in the background, that's about the gayest thing in the world." As for Stella, Thor observes that she's hot, "in an edgy, bitter, lez kind of way." (And isn't that the hottest version of hotness?) She yearns to hook up with the sinister, faintly Euro Lorelei (Roxane Mesquida), a witch with a vintage Mustang, despite Smith's all-too-prescient warning that the mythical Lorelei bewitched sailors and lured them to their deaths. ZOMG!

I should add that everybody relates to Smith as being gay -- and there is that hunky hot-tub repair guy he keeps meeting on the beach -- but he himself says his sexual major is "undeclared," and he does some powerful bedroom cooking with London (Juno Temple), who is waiflike and androgynous but undeniably female. And what the heck does all this post-adolescent sexual drama have to do with the mysterious disappearance of a strung-out redhead (Nicole LaLiberte), or with Smith's troubling dreams about a locked door and a Dumpster and the father he's never met? Oh, trust me, you'll find out, in a reckless, good-humored denouement that makes no sense at all.

Across 20-odd years and 11 feature films, the closest Araki's ever gotten to a hit was with his compulsively outrageous "The Living End" in 1992 and then with the far more sober "Mysterious Skin" a dozen years later, two movies that pretty much bookended the movement known as New Queer Cinema (a term coined in '92 by my former alt-weekly colleague B. Ruby Rich). If discussions about that movement sometimes bogged down in academic theory-speak that made them seem dogmatic and medicinal, the better films -- like Todd Haynes' "Poison," or Tom Kalin's "Swoon," or Isaac Julien's "Young Soul Rebels" -- were daring and maddening and fun to watch, in varying combinations. As the shock value of showing LGBT-whatever characters on-screen having sex, doing drugs, being unsaintly fashion-victim scalawags and finding other ways to épater the brainwashed bourgeoisie faded, the NQC bandwagon began to spin its wheels.

While filmmakers like Haynes or Pedro Almodóvar have completely transcended those labels -- and Kalin and Julien have migrated to making documentaries and/or experimental art films -- Araki never quite found his second act. Maybe he's been out there on the indie fringes so long that he's ready to be part of a new new wave (and if you want to call it "post-queer cinema" or "mumblequeer" or whatever, that's on you, buddy). The Jim Carrey-Ewan McGregor film "I Love You Phillip Morris" is pretty much an updated NQC movie made with stars, and with a sympathetic general audience in view. Like such newcomers as French-Canadian wonder boy Xavier Dolan (who has made two features at age 21), Araki has lost interest in shocking heteros for its own sake, or in drawing in-group vs. out-group circles of sexual hipness.

"Kaboom" is a psychedelic reverie that celebrates a world where the fluid nature of human sexuality -- i.e., the very basis of "queerness," which seemed so revolutionary and confrontational in the days of Araki's HIV-renegade odyssey, "The Living End" -- has become a semi-acceptable element of pop culture, and even a cliché. It's by far the funniest and warmest movie Araki has ever made, with much less juvenile angst and much more command of his craft. Do I wish he didn't drive it totally off the rails in the last few minutes, toward an anarchic and literally explosive conclusion? (This is one of those movies where the title might be considered a spoiler.) Oh sure, maybe. But not that much. Reagan-era punk nihilism isn't a pose for Gregg Araki; it's where he feels most at home (with his Godzilla figurines in dresses). Somewhere inside, not all that deep down, I feel the same way.

"Kaboom" is now playing at the IFC Center in New York, and also available on-demand, via IFC In Theaters, from many cable and satellite providers. Wider national release will follow.

I Love You Phillip Morris Movies Our Picks Pedro Almodovar