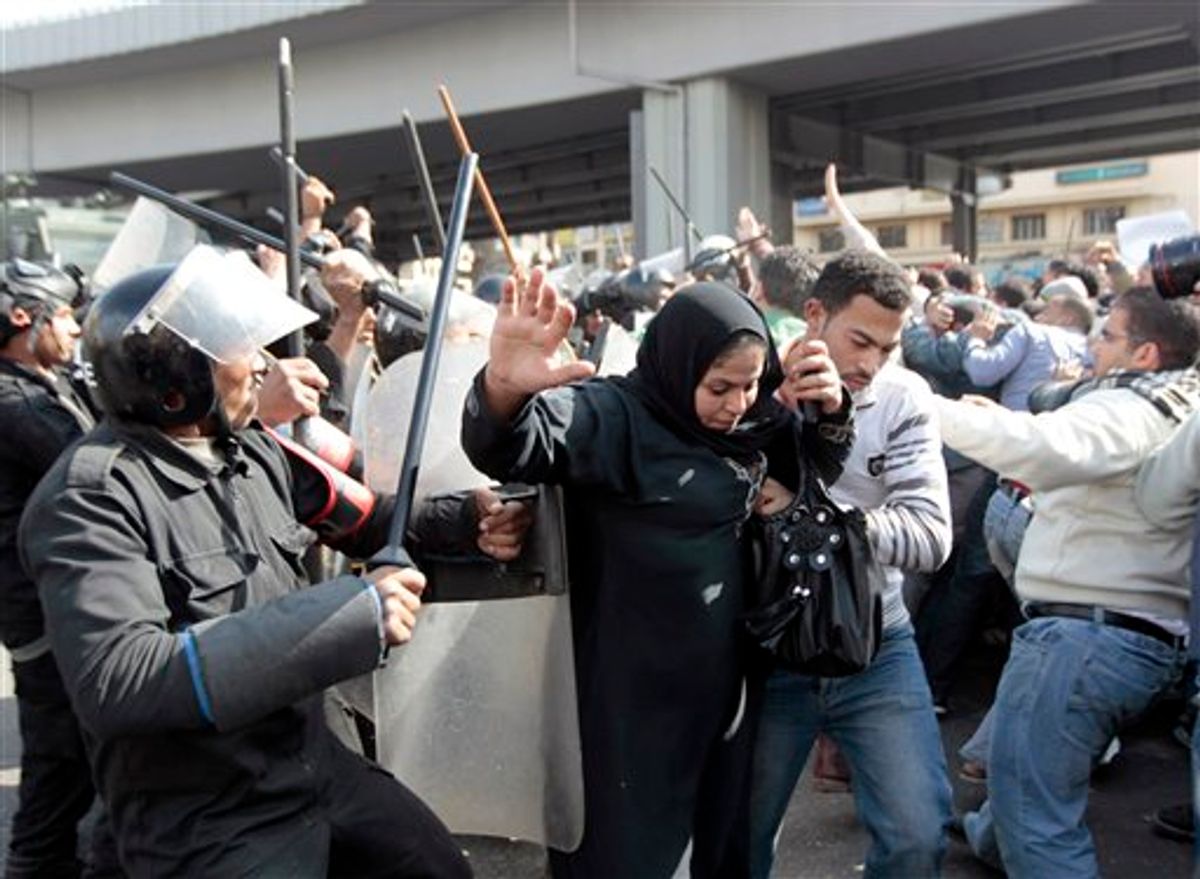 An Egyptian woman flees as Egyptian anti-riot policemen clash with protesters in Cairo, Egypt, Friday, Jan. 28, 2011. Egyptian activists protested for a fourth day as social networking sites called for a mass rally in the capital Cairo after Friday prayers, keeping up the momentum of the country's largest anti-government protests in years. (AP Photo/Lefteris Pitarakis) (AP)
--

Egyptian state TV says President Hosni Mubarak has ordered a night curfew from 6 p.m. to 7 a.m. in Cairo, the Mediterranean port city of Alexandria and the flashpoint city of Suez east of the capital. It said the military will work in tandem with the police to enforce the ban.

It was the most drastic measure so far to quell riots and protests that spiraled into chaos on Friday.

CAIRO (AP) -- Tens of thousands of anti-government protesters poured into the streets of Egypt Friday, stoning and confronting police who fired back with rubber bullets and tear gas in the most violent and chaotic scenes yet in the challenge to President Hosni Mubarak's 30-year rule. One protester was killed and even a Nobel Peace laureate was placed under house arrest after joining demonstrations.

Groups of thousands of protesters, some chanting "out, out, out," defied a ban on any gatherings and turned out at different venues across Cairo, a city of about 18 million people, some marching toward major squares and across scenic Nile bridges. Burning tires sent up plumes of black smoke across the cityscape as the sun set. Security officials said there were protests in at least 11 of the country's 28 provinces.

It was a major escalation in the movement that began on Tuesday to demand 82-year-old Mubarak's ouster and vent rage at years of government neglect of rampant poverty, unemployment and rising food prices. Security officials said protesters ransacked the headquarters of Mubarak's ruling party in the cities of Mansoura north of Cairo and Suez, east of the capital.

Some of the most serious violence Friday was in Suez, where protesters seized weapons stored in a police station and asked the policemen inside to leave the building before they burned it down. They also set ablaze about 20 police trucks parked nearby. Demonstrators exchanged fire with policemen trying to stop them from storming another police station and one protester was killed in the gun battle.

The death brought the toll of those killed in four days of protests to eight.

Internet and cell phone services, at least in Cairo, appeared to be largely cut off since overnight in the most extreme measure so far to try to hamper protesters form organizing. However, that did not prevent tens of thousands from flooding the streets, emboldened by the recent uprising in Tunisia -- another North African Arab nation.

"It's time for this government to change," said Amal Ahmed, a 22-year-old protester. "I want a better future for me and my family when I get married."

Egypt is Washington's closest Arab ally, but Mubarak may be losing U.S. support and running out of options to keep his grip on power. The Obama administration has publicly counseled him to introduce reforms and refrain from using violence against the protesters.

The protesters were energized Friday by the return of Nobel Peace laureate Mohamed ElBaradei, one of the country's leading pro-democracy advocates. He returned to the country Thursday night after a month abroad, declaring he was prepared to lead the opposition to a regime change.

When he joined protesters Friday after noon prayers, police fired water cannons at him and his supporters. They used batons to beat some of ElBaradei's supporters, who surrounded him to protect him.

A soaking wet ElBaradei was trapped inside a mosque while hundreds of riot police laid siege to it, firing tear gas in the streets around so no one could leave. Tear gas canisters set several cars ablaze outside the mosque and several people fainted and suffered burns.

When he returned home police stationed outside told him he was not allowed to leave again.

"We are the ones who will bring change," said 21-year-old Ahmed Sharif, one of scores who were with ElBardei. "If we do nothing, things will get worse. Change must come," he screamed through a surgical mask he wore to ward off the tear gas.

Abeer Ahmed, a 31-year-old woman who showed up for ElBaradei with her toddler, said she has a law degree but makes a living cleaning homes.

"Nothing good is left in the country," she said. "Oppression is growing."

In the upscale Mohandiseen neighborhood, at least 10,000 were marching toward the city center chanting "down, down with Mubarak." The crowd later swelled to about 20,000 as they made their way through residential areas.

Residents looking on from apartment block windows waved and whistled in support. Some waved the red, white and black Egyptian flags. The marchers were halted as they tried to cross a bridge over the Nile, when police fired dozens of tear gas canisters.

In downtown Cairo, people on balconies tossed cans of Pepsi and bottles of water to protesters on the streets below to douse their eyes, as well as onions and lemons to sniff, to cut the sting of the tear gas.

At Ramsis square in the heart of the city, thousands clashed with police as they left the al-Nur mosque after prayers. Police used tear gas and rubber bullets and some of the tear gas was fired inside the mosque where women were taking refuge. Hundreds later broke through police cordons to head to the main downtown square, Tahrir. But they were stopped by police firing tear gas.

Near Tahrir, hundreds of riot police in a cluster moved in, anticipating the arrival of large crowds. A short while later, thousands of protesters marched across a bridge over the Nile and moved toward the square, where police began firing tear gas at them.

Hundreds of protesters played a cat-and-mouse game with riot police in a square just behind the famed Egyptian Museum on Tahrir Square. Police were using tear gas and the protesters responded with rocks and chants of "illegitimate, illegitimate," a reference to Mubarak's regime.

Later, television footage showed a chaotic and violent scene where protesters were throwing rocks down on police from a highway overpass near Tahrir Square, while a police vehicle sped through the crowd spraying tear gas on demonstrators.

Clusters of riot police with helmets and shields were stationed around the city, at the entrances to bridges across the Nile and other key intersections.

The troubles were preventing trains from coming to Cairo, with their last stop now before reaching the city are south and north of the capital, said security officials.

In Assiut in southern Egypt, several thousand demonstrators clashed with police that set upon them with batons and sticks, chasing them through side streets in the center of the Nile-side city.

Mubarak has not been seen publicly or heard from since the protests began Tuesday. While he may still have a chance to ride out this latest challenge, his choices are limited, and all are likely to lead to a loosening of his grip on power.

Mubarak has not said yet whether he will stand for another six-year term as president in elections this year. He has never appointed a deputy and is thought to be grooming his son Gamal to succeed him despite popular opposition. According to leaked U.S. memos, hereditary succession also does not meet with the approval of the powerful military.

Mubarak and his government have shown no hint of concessions to the protesters who want political reform and a solution to rampant poverty, unemployment and rising food prices.

Continuing the heavy-handed methods used by the security forces the past three days would probably buy the Mubarak regime a little time but could strengthen the resolve of the protesters and win them popular sympathy.

The alternative is to introduce a package of political and economic reforms that would end his party's monopoly on power and ensure that the economic liberalization policies engineered by his son and heir apparent Gamal over the past decade benefit the country's poor majority.

He could also lift the emergency laws in force since 1981, loosen restrictions on the formation of political parties and publicly state whether he will stand for another six-year term in elections this year.

Friday's demonstrations were energized by the return of ElBaradei on Thursday night, when he said he was ready to lead the opposition toward a regime change.

They also got a boost from the endorsement of the country's biggest opposition group, the Islamic fundamentalist Muslim Brotherhood. The group called its supporters to join the protests on Friday.

The Brotherhood, outlawed since 1954, is Egypt's largest and best organized opposition group. It seeks to establish an Islamic state. It renounced violence in the 1970s and has since been a peaceful movement. Its network of social and medical services has traditionally won it popular support, but its detractors say its involvement in politics has chipped away at its support base.

It made a surprisingly strong showing in 2005 parliamentary elections, winning 20 percent of the legislature's seats, but it failed to win a single seat in the latest election late last year. The vote is widely thought to have been marred, rigged to ensure that Mubarak's ruling party win all but a small fraction of the chamber's 518 seats.

Egypt's four primary Internet providers -- Link Egypt, Vodafone/Raya, Telecom Egypt, Etisalat Misr -- all stopped moving data in and out of the country at 12:34 a.m., according to a network security firm monitoring the traffic. Telecom experts said Egyptian authorities could have engineered the unprecedented cutoff with a simple change to the instructions for the companies' networking equipment.

The Internet appeared to remain cut off in Cairo but was restored in some smaller cities Friday morning. Cell-phone text and Blackberry Messenger services were all cut or operating sporadically in what appeared to be a move by authorities to disrupt the organization of demonstrations.

A Facebook page run by protesters listed their demands. They want Mubarak to declare that neither he nor his son will stand for next presidential elections; dissolve the parliament holds new elections; end to emergency laws giving police extensive powers of arrest and detention; release all prisoners including protesters and those who have been in jail for years without charge or trial; and immediately fire the interior minister.

Authorities appear to have been disrupting social networking sites, used as an organizing tool by protesters, throughout the week. Facebook, Twitter and Blackberry Messenger have all seen interruptions.