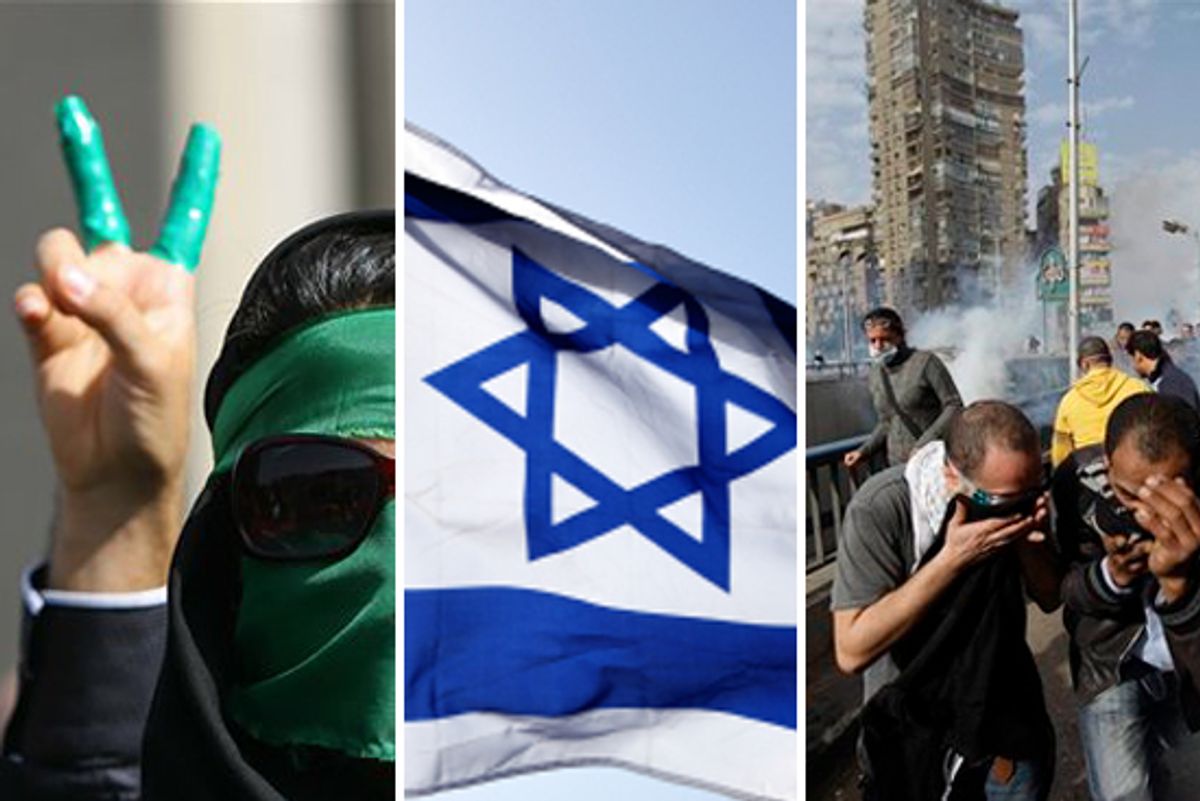 It's hardly a secret that Israel is worried about the events in Egypt, which signed a peace treaty with the Jewish state in 1979 under the leadership of Hosni Mubarak's predecessor, Anwar Sadat. More recently, Egypt has cooperated with Israel on the blockade of Gaza.

The Israelis are worried about, among other things, the possibility that an Islamic movement could gain power if the Mubarak regime were to fall. So I was interested today to see reaction from pro-Israel groups in the United States -- which were favorably disposed to the democratic aspirations of the Green movement in Iran in 2009 -- to the Egyptian pro-democracy protests.

This afternoon I spoke with Alan Elsner, senior director of communications at the Israel Project, an influential D.C.-based pro-Israel group. He has an analysis that is leading the group's website today that argues the Arab protests highlight Israel's "stability." But the piece does not explicitly support or oppose the Egyptian protests. I asked Elsner if the Israel Project is taking a position.

"Obviously, like all Americans and Israelis and others, we are watching with great attentiveness," he said. "We understand very well that this is a regime that has been there for 30 years and is an authoritarian government. It hasn't allowed free and fair elections -- we understand that. We also understand that this is a government that made peace with Israel in 1979 and Mubarak's predecessor paid for that peace with his life."

Elsner said that while it is too early to tell what a post-Mubarak government could look like -- and whether Mubarak will even fall -- there are concerns: "He has observed the treaty and that treaty has become a bulwark of stability. Should Mubarak go, there is concern about the kind of government that would replace him, and whether it would be inclined to maintain that treaty."

I asked Elsner about the Israel Project's previous support for a "Stand for Freedom in Iran" rally in September 2009, held in the wake of the Green Movement protests, which emphasized lofty ideals of human rights and democracy. Why is the group not supporting the same ideals in Egypt?

"There is a huge difference between the governments of Iran and of Egypt. The government of Egypt has a peace treaty with Israel and has observed it," Elsner said, also noting the antagonistic view of Iran toward Israel.  He said the Israel Project is not to his knowledge planning any programs in support of the Egyptian protests, saying it will likely "be regarded as an internal matter for the people of Egypt."

Malcolm Hoenlein, executive vice chairman of the Conference of Presidents of Major American Jewish Organizations, had much the same view when I spoke to him this afternoon.

"We've always supported the movement toward democratization," he said. "At the same time, you don't want to see upheaval that could be exploited by extremist elements in the region. We would be very concerned that elements would come into power that would not sustain the involvement of Egypt in the peace process and sustain the commitments in the peace agreements."

Hoenlein added: "Getting rid of Mubarak will create such disruption and potentially dangerous change" -- he would prefer an orderly process of reform to revolution.

So for now, at least, don't look for American pro-Israel groups to do much in the way of supporting the Egyptian protesters.