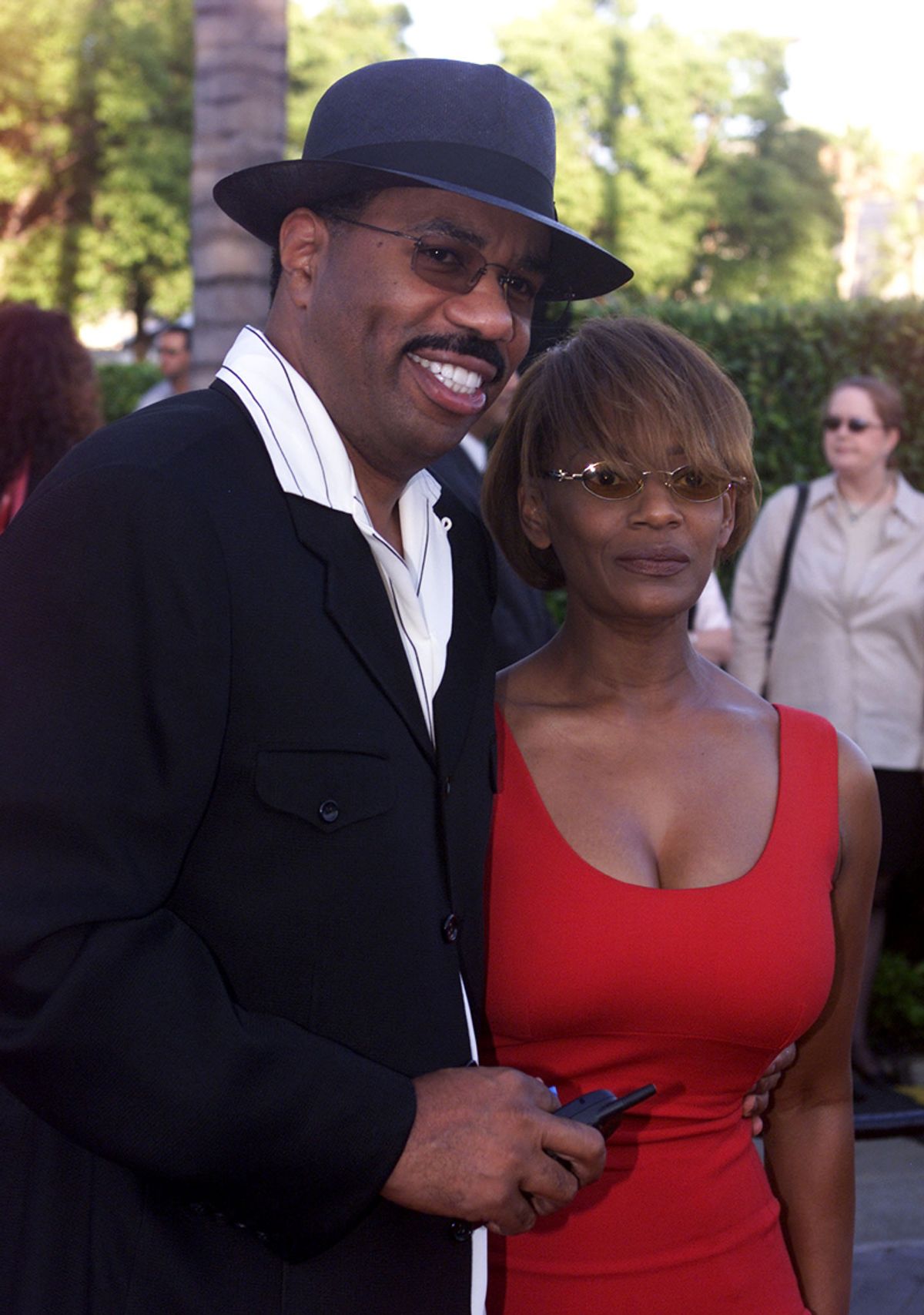 Actor Steve Harvey and wife Mary arrive as guests for the premiere of the new crime thriller film " The Score" at Paramount Studios in Hollywood July 9, 2001. [The film stars Robert De Niro and Angela Bassett and opens in the United States July 13. ] (Â© Fred Prouser / Reuters)
--

Steve Harvey probably does not think his ex-wife Mary is acting like a lady. The second wife of the comedian, radio host and bafflingly successful relationship guru's three wives has in recent days been in full-scale woman scorned mode, lashing out at the father of her 13-year-old son, Wynton, via a trio of damning YouTube clips. In them, a white turtlenecked Mary Shackelford (who also still sometimes goes by Mary Harvey) perches casually on a couch and speaks for 26 minutes, painting a distinctly unfunny portrait of her 16-year relationship with the comic. She describes their early courtship, the poetry he used to write her and the flowers he sent. She speaks of the difficult birth of their son, and the discovery of Harvey's alleged infidelities -- including a tryst with a woman she says admitted they'd had unprotected sex --  and the bitter dissolution of their marriage in 2005. "He took my Wynton. He turned my son against me, had me evicted from our house," she claims. "All the businesses, all the money, all the cars. He manipulated the courts against me. I woke up, and everything was gone."

Harvey, whose reputation now rests on his affable, family-man persona, did not take kindly to his former missus's portrait of him as a both a sexual and financial swindler. On his radio program this week he said, "I know the truth. The part that's hurtful is that my wife and children have to be drugged [sic] into this. I got you mad 12 years ago. That's what we're doing now?" He and current wife, Marjorie, have gone into full attack mode: Harvey is going to court next month to prevent Shackelford from discussing the terms of their divorce. And the current Mrs. Harvey has released a statement saying, "As a wife and a mother, I cannot stand back and allow the defamation of my character or actions that will malign my family, So, I will do what I need to do to the greatest extent of the law." She adds that "the posting is nothing more than a sad attempt by Mary to make herself relevant in the eyes of the media."

Shackelford's videos have since been removed from YouTube for violation of terms of service, but her accusations have already been reproduced and disseminated far too many times for even Harvey himself to tamp down. That's why they call it "viral."

What's the truth of their relationship, or the reason that Harvey was awarded custody of their son? There are at least two sides to every marriage, and the most accurate version of the story is rarely contained in the divorce papers. Yet Steve Harvey's incredulous, "That's what we're doing now?" is worth exploring. In her clips, Shackelford says she needs "closure" -- the most sought-after, least satisfying item to go rooting for after any disaster. But when she says, "I keep getting pulled back," she's on to something. Why wasn't she posting her side of the story on YouTube back in 2005? Could it be because there barely was YouTube then?

The latter part of the past decade has brought a whole new and decidedly agonizing element to breakups. Your ex doesn't have to be nattering on your radio or staring at you from the shelves of Barnes & Noble to be inescapable. He's probably following you on Twitter. He's probably right there on your "friend suggestions" list on Facebook. He's tagged in your photos, he's in your LinkedIn network, and he's in all your Google searches. Thanks, Internet, you make it such a challenge to move on.

Shackelford may or may not have had just cause to spend the last few years simmering over the fairness of her marital split -- and the fact that her child is involved ups the emotional ante considerably. But surely the fact that we are all long past the day where one can just uproot to a new town and forget the ex comes into play here. And the further fact that we can broadcast our bitterness about it is just another double-edged side effect of modern living, an opportunity to flaunt a little pain in the ex's face. It's almost always a self-destructive move -- and I wouldn't want Mary Shackelford's upcoming legal fees for all the YouTube clicks in the world. But anyone who's had a broken heart in the 21st century knows how inescapable and ongoing that grief can be when there's always something there to remind you -- how challenging it is to just turn off and act like a Luddite, think like a bozo filter.