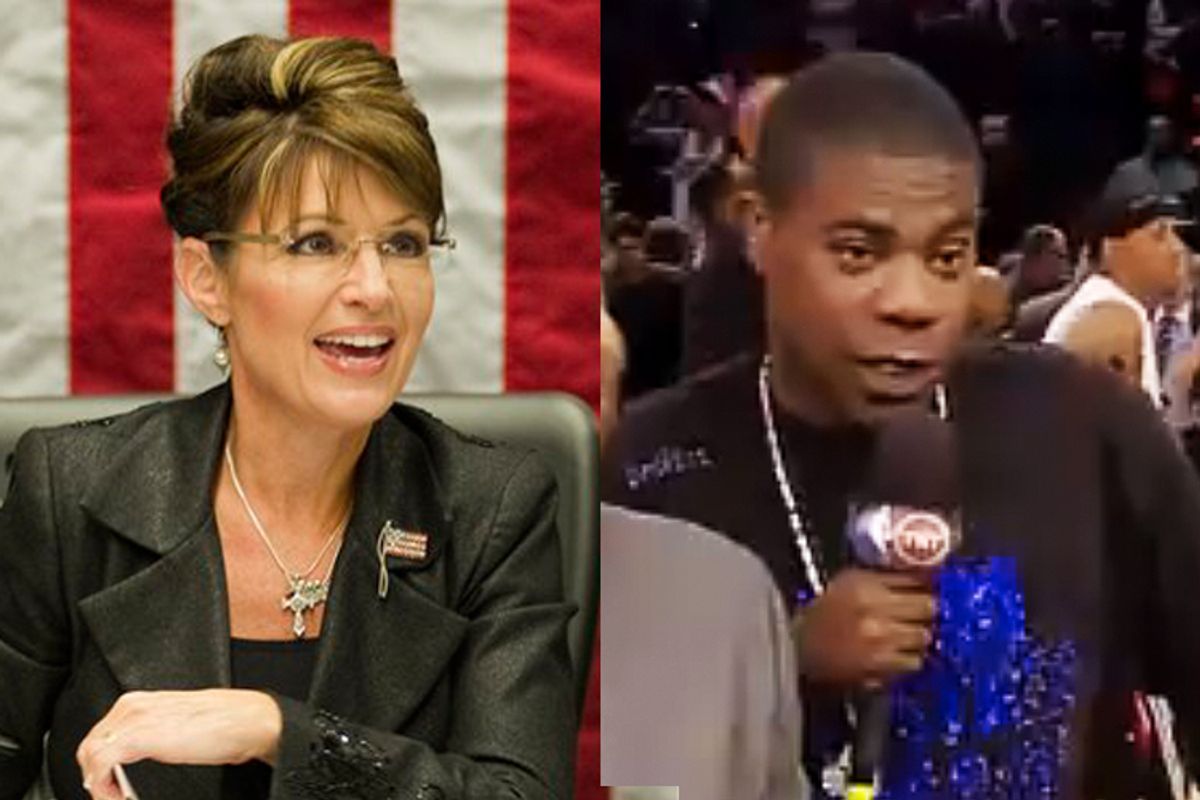 Unlike far too many celebrities today, Tracy Morgan doesn't need to Twitter to blurt something inappropriate -- although he'll gladly explain the similarities between his private parts and "Star Wars" characters there. No, he's an entertainer in the classic sense, one who still reliably drops bleep-worthy torrents of unfathomable commentary on national television.

My colleague Ethan Sherwood Strauss has rightly pointed out that it was Smith and Barkley who opened up the whole Palin spankability can of worms in the first place, so TNT's hasty apology over Morgan's "lack of judgment on our air" seems rather disingenuous. Frankly, the question was infinitely more tasteless than the reply -- which at least was both funny and utterly in character. Morgan's entire career, after all, is based on the dispensing of gasp-worthy nuggets. That's what makes him awesome. You don't see Jerry Seinfeld copping a hug from a Chicago news anchor and saying, "This is forbidden love! A black man and a white woman -- I'm like Jim Brown!" Did Ray Romano ever go on "The Daily Show" and threaten the audience that "Somebody'll get pregnant. Because you know me, I'm old school. I won't be pulling out!"? Not yet, anyway.

In a world where a train wreck like Charlie Sheen can still try to play it off like he's just a regular guy who does not have briefcases full of coke but merely a penchant for giggling himself into hernias, Morgan is that rare delight: a star who doesn't do humble or self-deprecating and sure as hell isn't going for normal. Yes, he's confessed, "I get to act crazy so I don't have to do it in real life, but while his talk show shtick is obviously a studied performance, he brings an authentic element of danger to it, something far too rare in the Leno landscape of forced cues and "I hear you had a funny incident on the set."

Even the ever brilliant Louis C. K. has a sitting-down-to-do-stand-up vibe to his interviews that Morgan does not. Instead, riffing on his grudges against Tobey Maguire and rendering the likes of Jon Stewart helpless with laughter, or handing Rachael Ray his "blue balls," Morgan brings a refreshing air of spontaneous outrageousness to a world where every sound bite has to be vetted through a publicist. And when he contemplates his Emmy chances by asking, "How much you think I could get for it on the street?" there's an authentic tone of true curiosity in his voice. Tracy Morgan may not, in fact, be a lunatic. He may not even really masturbate to Sarah Palin in his recreational moments. But his brilliance is that when he opens his mouth, he can always make you believe that he might get somebody pregnant tonight -- and if she' s lucky, that somebody could even be a former governor of Alaska.