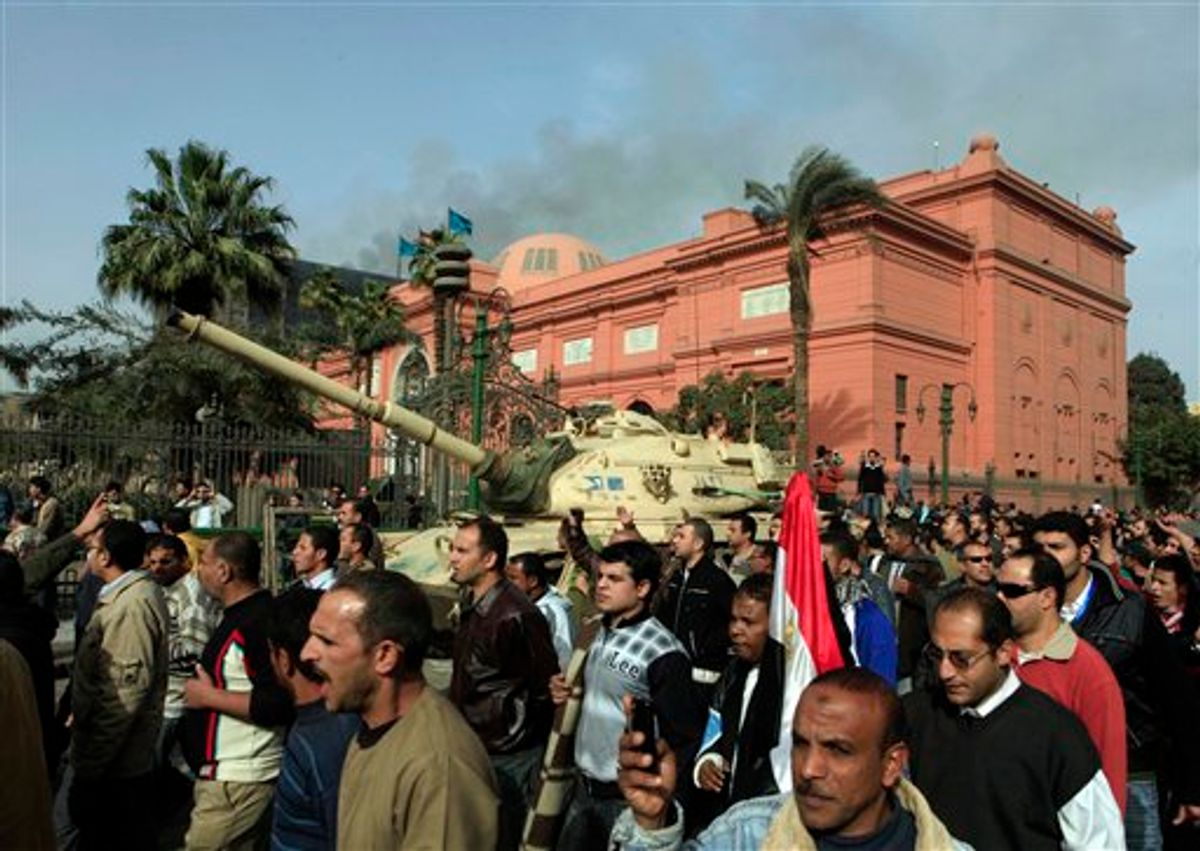 Egyptian protesters march in front of an army tank, past the Egyptian Museum in background, Cairo, Egypt, Saturday, Jan. 29, 2011. Hundreds of anti-government protesters have returned to Cairo's central Tahrir Square, chanting slogans against Hosni Mubarak just hours after the Egyptian president fired his Cabinet but refused to step down. (AP Photo/Amr Nabil) (AP)
--

Zahi Hawass said the vandals did not manage to steal any of the museum's antiquities, and that the prized collection was now safe and under military guard.

With mass anti-government protests still roiling the country and unleashing chaos on the streets, fears that looters could target other ancient treasures at sites across the country prompted the military to dispatch armored personnel carriers and troops to the Pyramids of Giza, the temple city of Luxor and other key archaeological monuments.

Hawass said now that the Egyptian Museum's collection is secure from thieves, the greatest threat to the collection inside is posed by the torched ruling party headquarters building next door.

"What scares me is that if this building is destroyed, it will fall over the museum," Hawass said as he watched fire trucks spray water on the still smoldering NDP headquarters.

The museum, which is home to the gold mask of King Tutankhamun that draws millions of tourists a year, also houses thousands of artifacts spanning the full sweep of Egypt's rich pharaonic history.

"The significance of the collection of the Cairo museum cannot be understated," said Thomas Campbell, the director of New York's Metropolitan Museum of Art by telephone. "It is the great repository of Egyptian art. It is the treasure chest, the finest sculptures and treasures from literally 4,000 years of history."

"If it is damaged through looting or fire, it would be a loss to all humankind," he said.

The museum is located near some of the most intense of the mass anti-government protests sweeping the capital, and Egyptian army commandoes secured the building and its grounds early Saturday.

Before the army arrived, young Egyptians -- some armed with truncheons grabbed off the police -- created a human chain at the museum's front gate to prevent looters from making off with any of its priceless artifacts.

"They managed to stop them," Hawass said. He added that the would-be looters only vandalized two mummies, ripping their heads off. They also cleared out the museum gift shop.

The prized King Tutankhamun exhibit had not been damaged and was safe, he said.

An Associated Press Television News crew that was allowed into the museum saw two vandalized mummies and at least 10 small artifacts that had been taken out of their glass cases and damaged.

Fears of looters have prompted authorities elsewhere to take precautions to secure antiquities at other sites.

The military closed the pyramids on the outskirts of Cairo to tourists, and armored personnel carriers could be seen outside the famed archaeological site.

Archaeologist Kent Weeks, who is in the southern temple town of Luxor, said that rumors that attacks were planned against monuments prompted authorities to erect barriers and guard Karnak Temple while tanks were positioned around Luxor's museum.