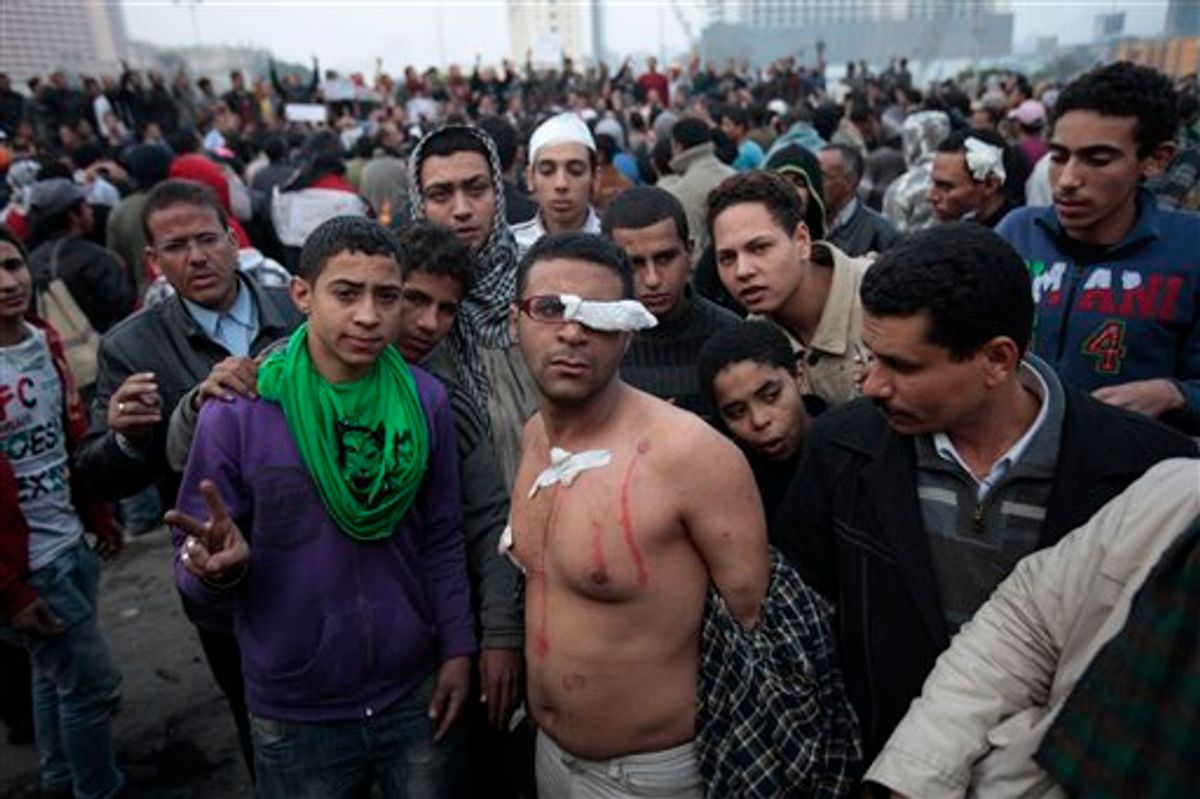 An Egyptian anti-government activist, wounded during clashes with police, poses for the photographer along with other protesters in Tahrir square in Cairo, Egypt, early Saturday, Jan. 29, 2011. Mobile phone service have been partially restored in Egypt, Saturday, after the recent communications blackout. (AP Photo/Lefteris Pitarakis) (AP)
--

A massive crowd of tens of thousands calling for the ouster of President Hosni Mubarak was gathering in the streets and squares of downtown Cairo Saturday afternoon, with protesters making clear they reject promises of reform and a new government offered by the embattled leader trying to hang on to power.

Dozens of tanks and armored personnel carriers fanned out across the city of 18 million, guarding key government building a day after large, violent confrontations emboldened the movement demanding a change of leadership. There was rampant looting across the sprawling city of 18 million and a growing feeling of fear and insecurity.

In the city's main Tahrir Square, at the center of Saturday's massive demonstration, there was only a light military presence -- a few tanks -- and soldiers are not intervening. Few police were seen in the crowds and the protest began peacefully but then police opened fire on some people in the crowd near the Interior Ministry and a number of them were wounded by gunshots. It was not clear whether they used rubber bullets or live ammunition.

One army captain joined the demonstrators, who hoisted him on their shoulders while chanting slogans against Mubarak. The officer ripped a picture of the president.

"We don't want him! We will go after him!" demonstrators shouted. They decried looting and sabotage, saying: "Those who love Egypt should not sabotage Egypt!"

The death toll since the largest anti-government protests in decades began Tuesday rose to 45, according to medical and security officials, 38 of them killed since Friday. Some 2,000 injuries have been reported.

Dozens of military armored personnel carriers and tanks as well as soldiers on foot deployed around a number of key government buildings in the capital, including state television and the Foreign Ministry after thousands of protesters besieged the two offices in Friday's riots.

The military was protecting important tourist and archaeological sites such as the Egyptian Museum, home to some of the country's most treasured antiquities, as well as the Cabinet building. The pyramids on the outskirts of Cairo -- Egypt's premiere tourist site -- were closed by the military to tourists.

On Friday, protesters burned down the ruling party's headquarters complex along the Nile in one of the more dramatic scenes in a day of utter chaos.

The demonstrators did not appear satisfied with Mubarak's actions to address the discontent. The president of 30 years fired his Cabinet late Friday night and promised reforms, which many doubt he will deliver.

"What we want is for Mubarak to leave, not just his government," Mohammed Mahmoud, a demonstrator in the city's main Tahrir Square, said Saturday. "We will not stop protesting until he goes."

As the protests entered their fifth straight day, the military extended a night curfew imposed Friday in the three major cities where the worst violence has been seen -- Cairo, Alexandria and Suez. State television reported the curfew would now begin at 4 p.m. and last until 8 a.m., longer than the 6 p.m. to 7 a.m. ban Friday night that appeared to not have been enforced.

Internet appeared blocked for a second day to hamper protesters who use social networking sites to organize. And after cell phone service was cut for a day Friday, two of the country's major providers were up and running Saturday.

In the capital on Friday night, hundreds of young men carted away televisions, fans and stereo equipment looted from the ruling National Democratic Party, near the Egyptian Museum. Young men formed a human barricade in front of the museum to protect one of Egypt's most important tourist attractions.

After years of simmering discontent in this nation where protests are generally limited, Egyptians were emboldened to take to the streets by the uprising in Tunisia -- another North African Arab nation.

But a police crackdown drew harsh criticism from the Obama administration and even a threat Friday to reduce a $1.5 billion foreign aid program if Washington's most important Arab ally escalates the use of force.

Stepping up the pressure, President Barack Obama told a news conference he called Mubarak immediately after his TV address and urged the Egyptian leader to take "concrete steps" to expand rights and refrain from violence against protesters.

"The United States will continue to stand up for the rights of the Egyptian people and work with their government in pursuit of a future that is more just, more free and more hopeful," Obama said.

Sen. John Kerry, a Democrat and chairman of the Senate Foreign Relations Committee, speaking on the sidelines of the World Economic Forum in Davos Switzerland, said Saturday he believes Mubarak must address the issues that matter to the people of Egypt.

On Friday massive crowds numbering in the tens of thousands overwhelmed police forces in Cairo and other cities around the nation with their numbers, attacking them with rocks and firebombs. Police have primarily used countless canisters of tear gas to disperse the crowds and beat them back with batons and sticks. They have also fired rubber bullets and used water cannons.

In a clear sign that things had spiraled out of police control, Mubarak called in the military by Friday night to enforce the night curfew. Late at night, there were scenes of armored personnel carriers filled with troops rolling slowly down the picturesque corniche along the Nile, thronged by cheering crowds who showed them affection.

There have been no clashes reported between the military and the protesters and many of them seem to feel the army is with them. Some even scrawled black graffiti on a tank that read: "Down with Mubarak."

In contrast, protesters have shown scorn to police, who are hated for their brutality.

In Tahrir Square, streets were littered with debris, glass, rocks and garbage and what appeared to be bullet casings. Charred fire engines and police trucks still smoldered. Fire engines tried to extinguish a fire in the building housing the government press monitor next to the Egyptian Museum.

Protesters attacked riot police with stones as they tried to enter the square, and officers responded with a barrage of tear gas and rubber bullets.

Some protesters were wearing T-shirts with "Down with Mubarak" emblazoned on their fronts. Others chanted: "The people want to topple the regime."

Not far from the square, the army sealed off the road leading to the parliament and Cabinet buildings.

Along the Nile, smoke was still billowing from the ruling party's headquarters, which protesters set ablaze during Friday's unrest, the most dramatic day of protests since the unrest began on Tuesday.