I love this stuff. Great flavor, more versatile than you think, and done in under an hour 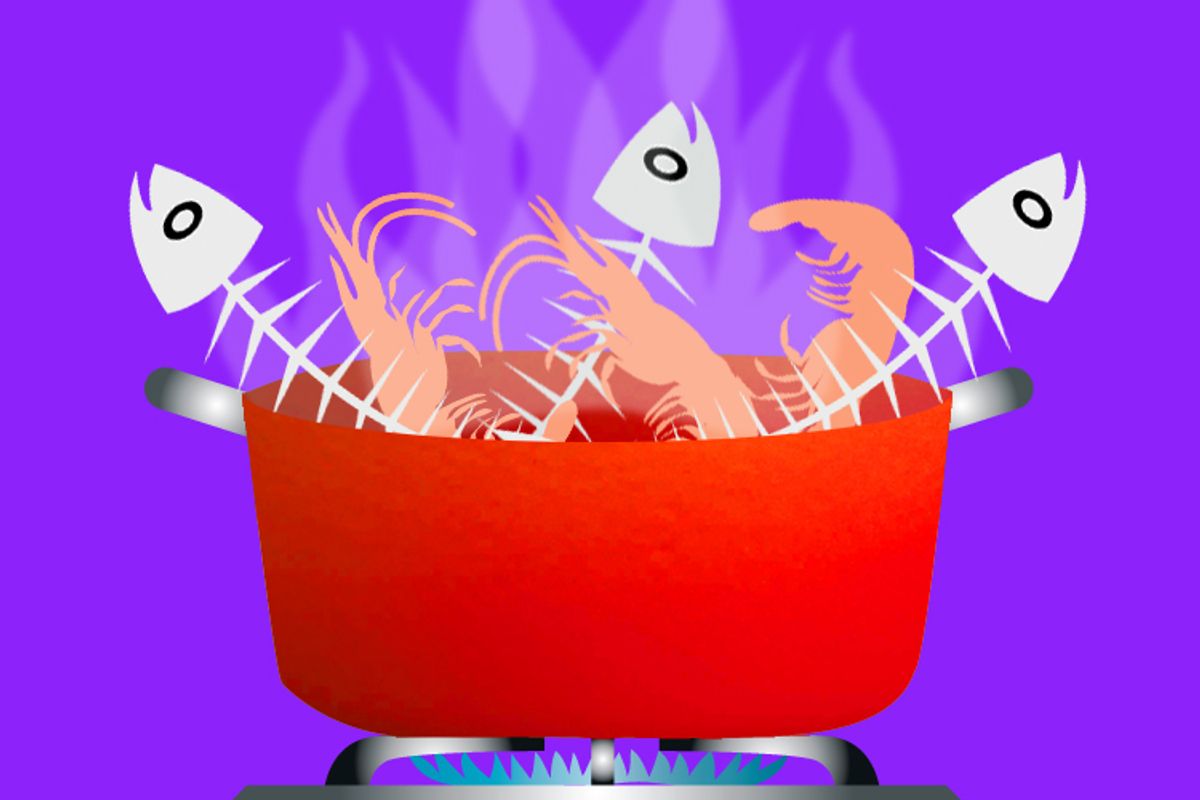 Welcome back, class. When we last met, we spoke of the proper and informal techniques of fundamental meat and vegetable stocks. Forgive me for the professorial tone today, but I find it difficult to communicate about stock any other way, because making stock is SO OLD SCHOOL. Boom!

Anyway, when I admitted that I actually don't often make stock the proper way at home anymore -- I mean, when am I going to start simmering bones eight hours before dinner? -- I did withhold a little. I will make seafood and fish stocks fresh, because they can be in and out in under an hour -- under half an hour if you really want. And I'm never too worried about what I'm using them for. Obviously they would be great for seafood sauces or soups, but if I want to make, say, beef stew and have only shrimp stock? I'm going to make beef stew with shrimp stock, and it's going to taste great. Don't be afraid to mix and match. Most times, if the stock is good, it'll taste good in the end.

And while I'll give you the "proper" quantities of bones or shells below, you can get away with far fewer than prescribed, because these recipes call for a bit of cooking before you add the water, which gooses up the flavor like mad.


But first, where am I going to get fish bones?

OK, sorry. Maybe I'm getting ahead of myself. If you go to a fish market, or the fish counter of a good grocery store, just ask for some fresh bones from lean fish -- sole, flounder, halibut and the like. Even snapper or bass are fine, but stay away from really rich fish like salmon or tuna, since their flavors are a bit too strong to blend well (unless you're trying to knock someone over the head with salmon flavor, that is). They'll likely have some that they're happy to give away. And heads are fine, if they smell good and fresh. (Just make sure the gills are cut out, which would cloud up your stock.)

Speaking of freshness, definitely take a good whiff of the bones. They should be clean smelling, kind of sweet; they can smell like they lived in the sea at one point, but if they're "fishy" or have a hint of ammonia, ditch them.

As for shellfish, all parts of the shell, legs, tails and heads are fantastic. If you're using big crab shells, you can split them with a cleaver first, but it's not necessary.

While it's possible to make fish and seafood stocks the same way as other "white" stocks (that is, simply simmering raw bones in water), most chefs prefer the more pronounced flavors of shells that have been sautéed and fish bones that they've sweat with aromatic vegetables before cooking. (Technically, this step and some white wine will make the fish stock a "fumet.")

(Adapted from the Culinary Institute of America)

Makes ½ gallon. You're probably not going to need that much, so feel free to half this recipe

Equipment: a pot big enough to fit everything, and that is ideally taller than it is wide (so the liquid doesn't evaporate too quickly). A strainer and a fine-mesh strainer. Maybe some cheesecloth, if you have some.

But what if I don't have that many bones? Do you know how goofy I feel asking for five pounds of fish bones?

No problem. Your fumet won't be as rich or flavorful, but even half as many bones will still give you enough flavor to use as a nice background for sauces to be served with seafood, stews, soups and the like.

And ... the promised shellfish stock!

I love this stuff. Reduce or skip the wine in the recipe, use standard mirepoix as described in the ingredients list, and replace the fish bones with the same amount of shrimp, crab, lobster, or whatever kind of shells you like. (Honestly, it's tough to come by this many shells, so I actually usually adjust the recipe by using as many shells as I have and using just enough water to cover and calling it a day.)

Get the oil ripping hot in the pot, almost smoking, and add the shells. Let them sit for a minute, browning, and then stir. Keep stirring until the shells are all pink, and if you want stronger flavor, keep stirring and cooking until they get a nice golden brown. This is going to smell terrific. (Alternatively, you can roast the shells in a hot oven.) Add mirepoix, cooking until that's taken on a little color, and then a little tomato paste (2 tablespoons if you're making the full recipe), and cook until that's aromatic and starting to change color. Add water and herbs, etc. Bring to a simmer, and simmer for 35-40 minutes (although superstar seafood chef Eric Ripert says you get all the good flavor out of the shells in 20). Strain and store as above.