The Palestine Papers: A fact-based play in one act

"For six decades I've been pretending to be the honest broker -- but I'm here to tell you: It's all lies!" 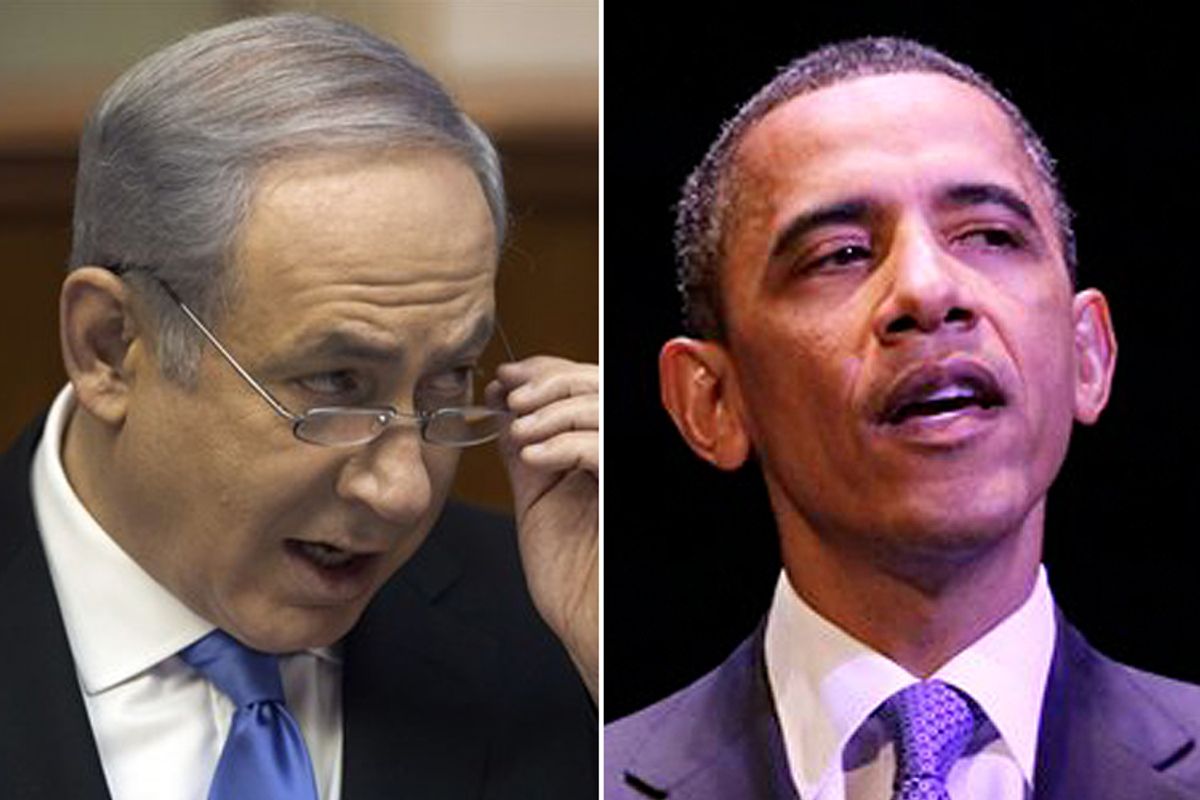 Earlier this week, Al-Jazeera released a decade's worth of memos, emails, maps and minutes from high-level negotiations between the United States, Israel and the Palestinian Authority. The documents revealed that the Palestinians had offered far more significant concessions than previously reported. In the wake of these revelations, Palestinians expressed anger at their increasingly weak leadership, accusing them of capitulating, while some Israeli commentators accused the government of missing its chance for peace. The Americans, meanwhile, came across as intent on not offending the Israelis, even if it meant contradicting established U.S. policy. It was against this backdrop that Uncle Sam decided to spend some time on the couch this week…

Scene: A psychiatrist's office in a nondescript strip mall in suburban Virginia. Dr. Weller, a clean-shaven, balding man in his sixties, wearing horn-rimmed glasses, khaki pants and a loose knit sweater with suede elbow patches, moves across the carpeted floor to greet his new client. At the doorway stands a tall, rangy senior citizen with a pointed white beard and top hat with red and white stripes and a white star on a blue background. Dr. Weller extends his hand.

Dr. Weller: Welcome. Do you prefer Uncle? Or Mr. Sam?

Uncle Sam (not meeting the doctor's eyes): Doesn't matter. I just have to get a load off my chest. (Looks nervously over his shoulder toward the office door.) By the way, I parked my car in your underground lot. I hope nobody followed me.

The two men settle into their comfortable armchairs.

Sam: It's about the Middle East. Specifically, the Palestinians. I just feel so guilty. For six decades I've been pretending to be the honest broker -- but I'm here to tell you: It's all lies! I mean, I send my people to give lip service to a so-called Palestinian State, but all I do is represent the powerful party, Israel -- I mean, they're a nuclear power, with one of the strongest armies in the world! And I end up supporting just about whatever they want! Even when I insist on something -- like this settlement freeze -- they just ignore me and do what they please!

Dr. Weller watches impassively as tears well up in Uncle Sam's eyes. Sam begins to reach for the box of tissues, but instead clears his throat violently and balls his fists in his lap.

Sam (groaning at first, then turning angry): And now, all these documents, the so-called Palestine Papers, have come out showing that I couldn't care less about the Palestinians, their wishes to be free, all those millions of refugees -- why, I even had Condi Rice tell those compliant Palestinian negotiators that they should send the refugees to South America! And now that the truth has come out on this Al-Jazeera network, it's all in plain sight. And at last I realize how awful I've been all this time. I mean, it's just --

Dr. Weller (leaning forward, speaking gently): Hold on a second, Mr. Sam. I don't really know all these details -- fill me in, please. I need to get up to speed if I'm going to help you. I need some context, Mr. Sam.

Uncle Sam looks down at his hands. He still won't look Dr. Weller in the eye.

Sam: See, there was a time, 60 years ago or more, when there could have been two states, one for the Arabs and one for the Jews. Or so we thought. A lot of people back then, even some Jews, wanted a single state, or a binational state in old Palestine. But it wasn't in the cards. Then came the war in '67, and after that Israel started building all these settlements -- illegal under international law, and our official policy all along was in accord with that, so that eventually we could have a "two state solution" --

Sam (sharply): It's important for you to understand the background. See, after 1993, when the Oslo "peace process" -- what a joke of a name! -- when that started, Israel kept building settlements and roads for Jews and VIPs only, and after a while the Palestinians were surrounded by Israelis in their rooftop houses -- half a million of them in the West Bank and East Jerusalem. Barely 100 thousand settlers in the West Bank at the beginning of Oslo, and more than three times that today! And how were we going to get them out? Answer: We wouldn't! Eighty percent of them would stay! I kept telling my negotiators, it's OK, we support Israel with the idea of swapping lands. We'll just let them get rid of some Arabs in Israel and make them part of the Palestinian state, and give them some other useless lands, while Israel keeps nearly all these settlers in their places -- they call them suburbs -- in the middle of East Jerusalem and the West Bank. One of them, Ariel, has nearly 20,000 people, and it's nearly halfway to Jordan from Tel Aviv! That, and the other settlements and "security zones," were going to carve a future Palestine into pieces! Some Palestinians started shouting about Bantustans. We laughed, but you know what? They were right! For them, it's like a horror movie: the Incredible Shrinking Palestine! I mean, just look at a map of how their lands have been carved up. Even now, the West Bank is only 22 percent of the original Palestine, and 60 percent of that is under military occupation!

Dr. Weller: I understand that these are important facts. But let's get back to your feelings. You're experiencing feelings of guilt. Why?

Sam (grimacing, pressing his fists into his temples): We kept signing off on the Israeli idea that the Palestinians never had a "partner for peace." But if you look at how the Palestinian negotiators -- I mean, if you can even call them that, they only represent the West Bank and have lost nearly all credibility with their own people even there. Anyway, these guys agreed to give up almost all the settlements in East Jerusalem to Israel.

Dr. Weller: Why would they do that?

Sam (looking up, meeting the psychiatrist's gaze for the first time): Because they're weak, and Israel is strong, and we're strong, and we side with Israel. "Honest broker," my foot! Sometimes I hate myself!

Dr. Weller: I understand. We'll get to that. Tell me, Uncle, when was this meeting?

Sam: June 2008. And my people just sat by, like Israel's codependent arm-twister, while the Palestinians agreed to this. But even that wasn't enough. And you know what the Israeli foreign minister said? I want more! They want these two big settlements, Maale Adumim and Ariel. And when the Palestinians finally said no to that -- they did have a little backbone, I've gotta admit -- do you know what we told Condi to say?

Sam (face reddening): About Maale Adumim, she said, "Then you won't have a state!" I mean, after all they've given up -- down to a tiny fraction of their original dreams -- and we won't even lean on Israel to give up those two big settlements.

Sam (sounding despondent): What is wrong with me?

Another beat. Dr. Weller leans back, squinting through his glasses at Uncle Sam, his hands resting on the arms of his overstuffed chair.

Dr. Weller: Uncle, you sound remorseful. And that can be the first step toward understanding and rebuilding your sense of self. But tell me, why do you think you have sided with Israel all these years?

Sam (a bit defensively): Well for one thing, in the early days, right after the tragedy in Europe, she needed our support! And I'm proud that we were there. Though it's true I could have opened our American doors to all those poor Holocaust survivors, and I didn't. I guess I feel guilty about that too. But that's another story. Today, Israel is so powerful, it seems even my hands are tied. Do you have any idea how much the Lobby has locked up the Congress?

Dr. Weller: The Lobby? Do you mean what some people call the Jewish Lobby?

Sam (indignantly): No! The Israel Lobby -- there are many Christians in that lobby, including some who think Jesus is coming back and Israel needs to be in control of the whole Holy Land.

Dr. Weller: I heard about that.

Sam: And many Jews are not part of the Israel lobby at all -- they're very critical. But the Lobby is so strong that Israel doesn't seem to care at all what we say -- no matter who's president. It's gotten so bad, it's like the tail wagging the dog. You know what happened when they wouldn't agree to extend the settlement freeze? We offered them $3 billion -- three billion dollars! -- in F-35 fighter jets and other military hardware.

Dr. Weller: When was this?

Sam: Back in November. And still they snubbed us! And yet, did you hear a peep out of me? No!

Silence. The ticking of a clock on the wall. Dr. Weller studies his patient.

Dr. Weller: Mr. Sam -- Uncle -- we're running out of time, but I do have a few thoughts. First, you have every reason to feel remorse. That may sound harsh coming from a therapist, but there's a bright side, too: You are recognizing a complex pattern that with time and effort can be undone. But you need to get to the roots of this. From all the things I'm hearing, it sounds like your relationship with Israel is at the heart of the problem. Do you think that's fair to say?

Sam: (quietly, looking down at his hands again): Yes.

Dr. Weller: Then maybe one constructive step in redefining that relationship would be to acknowledge the truth about the "peace process" and the "two state solution": that they just aren't working. Do you think you can do that?

Sam: (alarmed): Abandon the two state solution? Are you kidding? Do you know how much time we've spent on this? How many decades? How many thousands of hours, maps, plans, resolutions? Are you crazy? I mean, what kind of therapist are you? For crissake! Have you completely lost your senses?

Sam continues his rant, then begins hyperventilating. Dr. Weller leans forward, appearing on the brink of coming to his aid. But Sam's apparent panic attack subsides, and he begins to breathe normally again.

Sam (now brightening): Wait! Do you think I could get a prescription? Something to make me at least feel a little better? Maybe it could help me just put this issue on hold -- I could always deal with it down the road. After Afghanistan, for example. And the 2012 elections.

Dr. Weller: I'm sorry, Uncle. What you're dealing with is not just depression -- it's confronting delusion. You need to be mindful of what the Buddhists say: End your attachment to what is not real. Accept the truth as it is, and let go. Prozac won't help you do that.

Sam: Then what should I do?

Dr. Weller: I'm sorry. I'm afraid our time is up for this week. Can you come back next week? We can explore all of this.

Frankly, Uncle, it's a much deeper problem than you realize.