The "Puppy Bowl" channel has become intent on terrifying its audience. What happened? 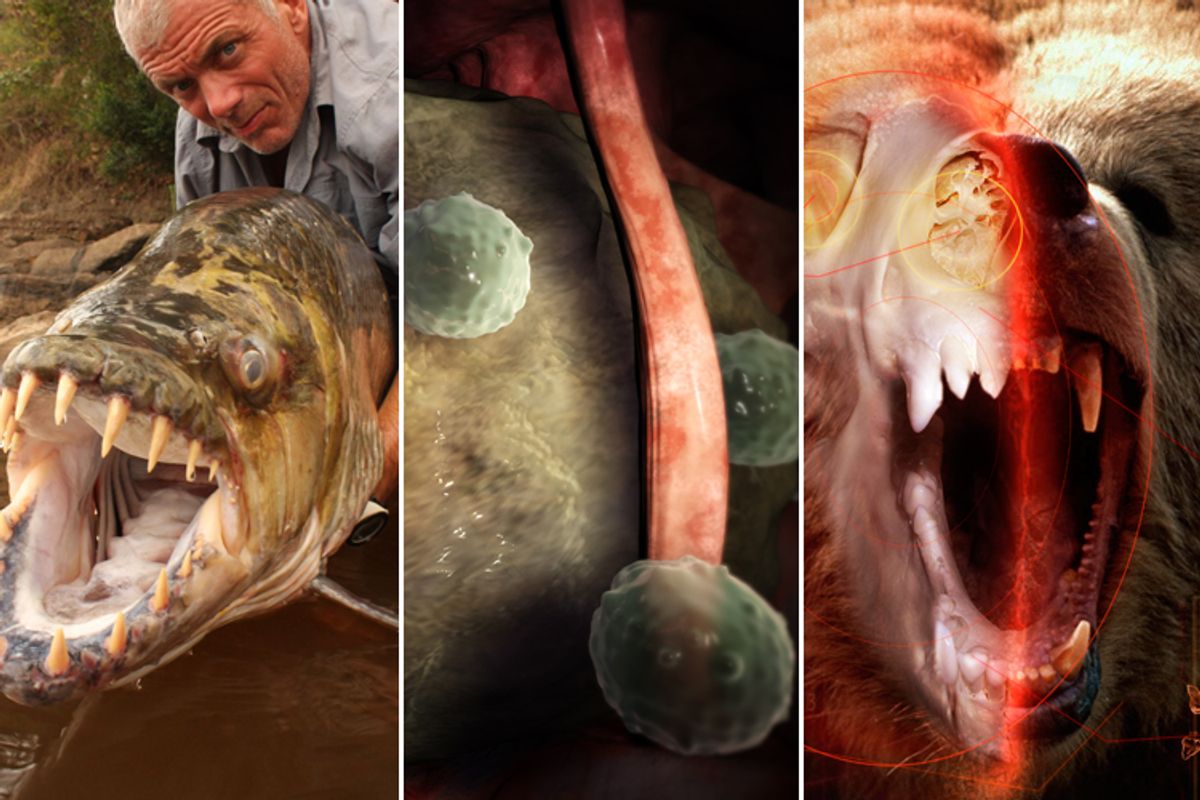 From left: "River Monsters," "Monsters Inside Me" and "I, Predator"
--

In an early installment of the hit Animal Planet show "River Monsters," self-identified "biologist and extreme angler" Jeremy Wade heads to the deep South of the United States to find a fish called the alligator gar, a big oafish-looking thing with a narrow snout and sharp teeth. They have a fearsome reputation as bloodthirsty limb-biters with a taste for human flesh, a point driven home with a flagrantly bad reenactment of a Depression-era little girl getting her foot bitten off.

"River Monsters" is probably the best example of Animal Planet’s curious change in recent years, from a network dedicated to educational and entertaining animal programming to a channel intent on terrifying its viewers. Wade focuses on one presumably dangerous fresh-water dweller per episode, from the ubiquitous piranha in the pilot to more obscure critters like the aforementioned gars (which turn out to be harmless), freshwater sharks and species of giant "man-eating" catfish. The series premiere, in April 2009, was Animal Planet’s most successful ever, netting a cable-respectable 1.3 million viewers. The 2010 debut of the second season, in early 2010, drew 1.7 million, and it has remained the channel’s consistent ratings winner. (It's third season premieres this spring.) But the show is also a sign of the broader change that's happening across the cable TV universe -- as more and more channels abandon the niches that make them unique, in favor of generically "extreme" reality programming that is also remarkably indistinguishable.

Being both a trivia fiend and a nature person, coming from a rich tradition of veterinarians, zookeepers and others heavily invested in the furry, feathery, scaley world, I used to love Animal Planet. I'd grown particularly fond of the network in the months after my move from the mellow, sprawling greens of Florida to gray, compact Manhattan. Shows like "Meerkat Manor" (a peek into the day-to-day lives of meerkats), "Big Cat Diary" (a look into the day-to-day lives of lions, leopards and cheetahs), and "It's Me or the Dog" (like "Super Nanny," but with dogs instead of children) were captivating not just for their educational and entertainment value, but for footage of uninterrupted expanses of sky and grass. I even looked at the suburban backyards of the dog training shows with an inconsolable longing.

But beginning in 2008, Animal Planet gradually unveiled a radically new programming agenda, starting with the network logo. Gone were the friendly rounded white letters on the green backdrop, topped by a silhouetted white elephant balancing a globe. That inviting image was replaced by the channel's new logo: "ANIMAL PLANET," in menacing all caps, the "M" knocked sideways as though not tough enough to stand with the other letters on this newly hardened dog-eat-dog network. There was a new Animal Planet in town, all right, and it was a biter.

The shows, too, had an added layer of grit. There was the short-lived "Jockeys," a reality program about the diminutive, fearless athletes who race horses for a living. There were a few nature/survival reenactment testimonials, including two separate programs titled "I'm Alive" and "I Shouldn't Be Alive," both more or less about people getting lost in the wild and just barely not starving to death. Running between all of this survival were nearly nonstop ads for "The Pit Boss" (whose new season premiered this weekend), a reality show chronicling the daily life of an ex-con named Shorty Rossi who runs a little-person talent agency and rescues pit bull terriers in his spare time.

Since early 2010, though, as Shorty Rossi and company rolled in, the animals have started to play second fiddle on their own network. Then, this past spring, the Animal Planet unveiled its new, puzzling slogan: "Animal Planet: Surprisingly Human." This last move was a particularly weird one, the equivalent of rebranding the Golf Channel: Surprisingly Football. "Animal Planet is not only about animals," the network said about the shift, at the time, in a press release. "It's about people ... and real compelling human stories made more intense, more fun, more frightening, more alive and more entertaining."

By and large, the shift has been a ratings success. Since the beginning of the programming overhaul in 2008, Animal Planet has had two years of uninterrupted ratings growth, and a seven-year drop in median age, inching it ever closer to the coveted 18-24 demographic. The "Puppy Bowl" network wanted to compete with the prime-time big boys, and to the minds behind the "Surprisingly Human" campaign, it needed an attitude adjustment to make that happen.

Oxymoronic slogan aside, there's nothing wrong with the channel wanting to sex up its image a little. This is, after all, the network responsible for the Mario Lopez-hosted "Pet Star." But was the only way to make animals entertaining really to pair them with entertaining TV people? Marjorie Kaplan, Animal Planet’s new programming director, believed it was, citing a need in several interviews to attract viewers who weren’t interested in nature in the first place. "When I got here, Animal Planet was the best-loved brand that nobody ever watched," she told me. "We're not looking to be a natural history channel. We’re looking to be an entertainment destination." She seemed less concerned with whether the network could achieve higher ratings while remaining truly animal-centric. "If the [animals] category is not vital enough, we have to break the category," she admitted. "Animal Planet is, in fact, not about animals."

If you turn on Animal Planet today, you'll find it hardly distinguishable from a running loop of "Most Extreme" video shows and weird reality TV. Watching an afternoon of it now is a far less soothing experience than it was even 18 months ago. These shows make you terrified of nature, even if you aren't in some far-flung jungle. On Jan. 11, the network premiered "I, Predator," which "puts you in the driver's seat of nature's most perfect predators as they attack and take down their prey." One program, "Monsters Inside Me," features stories from people who’ve had bouts with various flesh-eating bacteria, usually from snooping around a creek near their childhood homes or using sketchy bathrooms. It makes you never want to leave the house again. Which is a good tack, come to think of it, if you want people tucked safely at home watching your network.

"There will always be a segment of the public that is disinterested in wildlife and wild places," Dan Lisowy, the educational director of the Bronx Zoo and Wildlife Conservation Society, told me. Lisowy's job makes him responsible for nearly every animal-related education program in the New York City area, from elementary school teaching aids to continuing adult education classes. "I wonder if the advent of 200 channels of TV, some of which are dedicated to wildlife and nature programming 24/7, and the Internet and YouTube have simply saturated the market with what we define as nature documentaries," he said. "YouTube lets people watch five minutes of action-packed wildlife footage, rather than sitting through 25 minutes of buildup to get there."

If our ADD is partially to blame for the fall of the nature documentary, the greatest nature show ever produced, ironically, can probably be blamed for killing it. "Planet Earth," which aired in the U.S. on the Discovery Channel in 2007, saw the genre’s potential fully realized. The lush 11-episode series, which boasted a cinematic budget and state-of-the-art technology, never-before-seen footage and a celebrity narrator, made all nature shows that had come before look like home movies by comparison. The series won a bevy of awards, spawned a feature film, and netted over 100 million total viewers, earning it the title of "most-watched cable event of all time." There was no going back to what the nature documentary used to be. Unfortunately, multimillion-dollar, multi-year filming projects aren’t feasible as regular cable features, so one can only assume that Animal Planet had to look for new ways to make itself interesting.

But Animal Planet’s makeover reflects the bigger changes happening on cable. In terms of popular art being both accessible and viable, television is in a period of growth similar to that of film in the 1970s. With the cable structure as is, however, not every channel, particularly those originally set up to cater to specific interests, can be an AMC or an HBO. Nor should they have to be. Of all entertainment mediums right now, this is probably the only one that is expanding and becoming richer. History Channel, too, is filling up with offbeat reality programming, most of it about people doing horribly dangerous jobs and very little of it historical in any way. Much of it could slip into the revamped Animal Planet with little notice, particularly "Swamp People" (alligator hunters in backwoods Louisiana) and "Ice Road Truckers: Deadliest Roads" (self-explanatory). These shows seem to be the only way that the programming heads of these networks can think of to compete with other cable channels, leaving less and less room for more informative content. This is a pretty pessimistic, sad view of what attracts us, and as a result many of these "specialty" channels are becoming a blur. It's really hard to tell History Channel, Animal Planet and Discovery Channel apart these days. When I first set out to watch "Swamp People," I could not, for a million dollars, remember which channel it was on.

Kaplan cited Food Network as a major influence in Animal Planet's new direction, "not that we're a cooking channel, although you might see a little cooking on Animal Planet." But Food Network still does cooking shows, just more interesting ones. It hasn’t abandoned the idea of the cooking show altogether. One thing Kaplan and her team fail to realize, or at least acknowledge, is that every specialty channel has adopted the same strategy as Animal Planet’s. That may work for ratings in the short term, but eventually these formerly specialty networks are all going to melt together into one, schlocky mess.

If these channels don't want to disappear completely, they have to find a way to work within their specialty areas, not move away from them. Hopefully, once it widens its viewership, Animal Planet can drop the "Surprisingly Human" charade and admit that they are actually trying to get people interested in the natural world, without alienating those proud few of us who liked nature programming in the first place. There are signs it might be succeeding. Despite its protestations, "River Monsters" teaches as much about freshwater fish as any traditional narrated documentary could ever hope to. One of the network’s newest shows, "Pit Bulls and Parolees," about a pit bull rescue that pairs the dogs with ex-cons, seems sensationalist on the surface, but it really gets at the difficulties of rehabilitating abused dogs, and, unexpectedly, the staggering amount of money required to keep animal shelters up and running.

But right now, these shows are few and far between. "Planet Earth" was successful because it made nature entertaining, not because it tried to pretend that it wasn't really about nature. If Food Network can keep trucking along without a food poisoning testimonial show, surely there must be a way for Animal Planet to draw viewers without patronizing them, or having "Puppy Bowl" and "Pet Star" at one end and horrifying death-by-piranha on the other.