Coca: The next health food craze that won't be

Non-cocaine coca leaf products are all the rage in South America, but the War on Drugs is going to kill our buzz 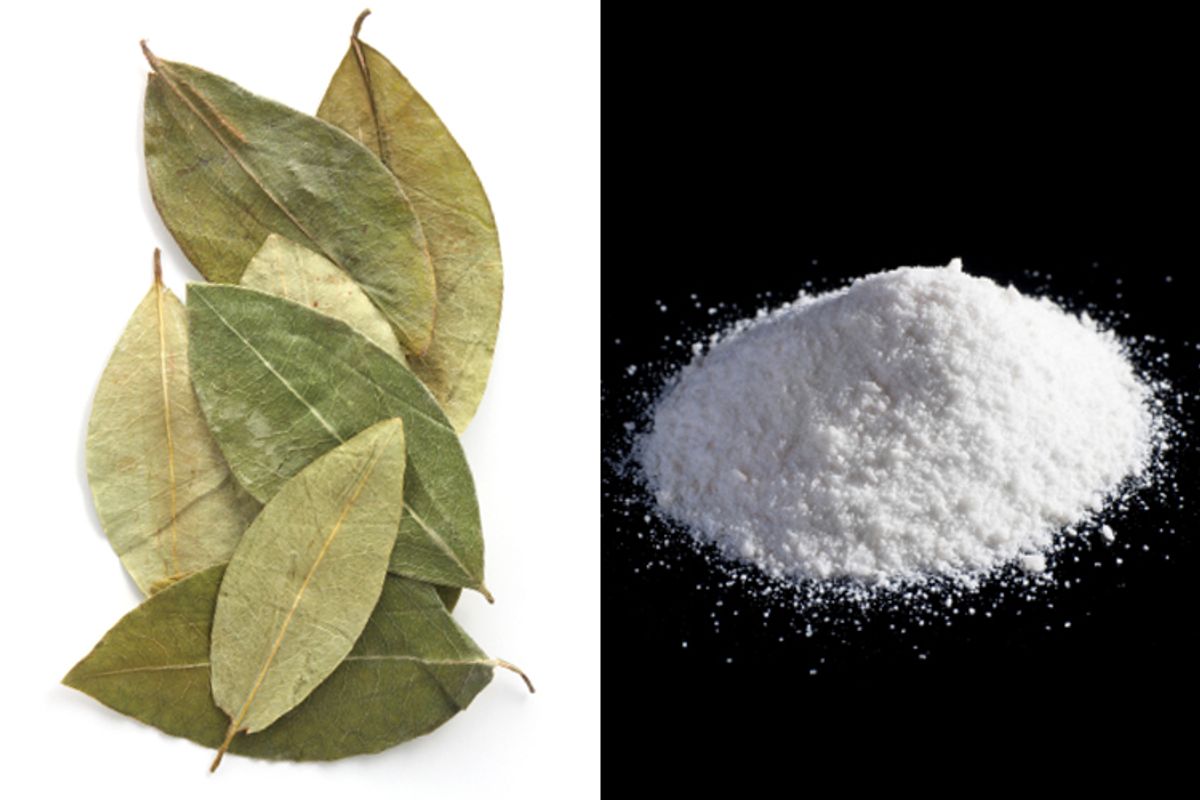 Walk into a supermarket in Bolivia and witness the unfolding of what might have been the world's next big food fad. The aisles are lined with boxes of cereals, cookies, candies, granola bars, soft drinks and even flour tinged the earthy green color of the exalted coca leaf. One dubiously neon-lime liquor, Agwa de Bolivia, advertises "a coca leaf way of life." A new soft drink, Coca Brynco, was launched with government support on Jan. 18. Touting extraordinary health benefits, including both energy-boosting and appetite-suppressing properties, these sweet, nutty-tasting coca products are burning hot in South America. Coca is even making inroads in fine dining; South America's most famous chef, Peruvian Gaston Acurio, uses the leaf to season meat and shellfish, and to make Andean-style cocktails. But, unfortunately, without a plane ticket, you probably won't be enjoying one of his coca sours any time soon. Outside of the Andes, coca isn't really known for its culinary and medicinal uses. It's mostly known as the raw source of cocaine.

This association is the reason why Bolivia's campaign to end the U.N. narcotics ban of the coca leaf will fail today. The ban, which began in 1961, lumps the leaf -- and all products made with it -- in with the powder, and called for the elimination of all forms of coca consumption. The United States, as the largest consumer of cocaine and home of the "War on Drugs," leads the opposition (Britain and Sweden have also filed objections), and its argument against the leaf basically boils down to "mo' coca, mo' cocaine."

But coca has been used as a food and medicine in Andean culture far longer than crack has ravaged American cities, far longer than lines on a counter were a party favor. Since before Incan times, Andean tribes have chewed or brewed the leaf into teas, extracting a mild stimulant entirely unlike the über-concentrated crazy-making stuff in cocaine. (The effect is comparable to a weak cup of coffee.) Coca is packed with nutrients and aids in oxygen absorption, which makes it particularly important to the Andean people who live at high altitude, and its use and consumption has become a powerful marker of cultural pride among indigenous people. It is why Bolivian President Evo Morales, the first indigenous Bolivian elected to that office, has made it his pet project to repair the little green leaf's reputation, starting with amending the U.N. ban.

Still, the U.S. just isn't having it -- after all, we've spent the past several decades and a lot of taxpayer dollars bulldozing, burning and spraying coca crops with herbicide from planes. However, with Morales' encouragement, a local array of coca food products has exploded to provide a legal market for coca farmers. Coca has always been a dominant crop in the Andes, and many farmers had no other options but to sell their products to cocaine manufacturers.

Of course, coca leaves have attracted curiosity outside the Andes before. A 19th century French chemist created a precursor to Four Loko, called Vin Mariani, out of Bordeaux wine and coca leaves. It was so popular that an American company developed its own non-alcoholic coca drink, which you may have heard of: Coca-Cola. Incidentally, Coca-Cola is the only coca product in the world that may be exported overseas (the cocaine component is removed first). For the most part, though, the Western reaction to coca use has been negative, ever since the Europeans first penetrated the Andes and railed against the "pagan" practice. In fact, the 1961 ban is largely based on an unsubstantiated 1949 report claiming that coca made the natives lazy and drove up poverty levels.

This history lends a sense of urgency to the development and marketing of this new slew of coca products. On Friday, indigenous activists organized a mass protest of the U.S. opposition, with thousands of Bolivians gathering to chew coca outside the U.S. embassy in La Paz and throughout the country. For them, legalization is but a long overdue recognition of the value of indigenous culture.

And then there's the economic development of the Andes. Of course, in America, where little-known "exotic superfoods" like açai and goji can suddenly become enormously popular, "valuing indigenous culture" is often just fancy talk for a marketing opportunity. Retailers have successfully sold us on products like agave nectar with lovely narratives of pristine streams, muggy rain forests, mysterious ancient origins and so on. We seem to respond to these stories, believing in the exotic, "natural" authority of the natives. Maybe we can chalk up this reaction to Western guilt, or maybe we are genuinely excited to be exposed to another culinary culture. Either way, coca's history is certainly long and rich enough to capture the imagination.

Why shouldn't coca farmers be able to capitalize on the romantic ideas of post-colonial, fair-trading Westerners like everyone else seems to be doing? It's not hard to imagine a Whole Foods display of the goods already on the market in Bolivia. Forget those pop-up ads touting the shocking truth about açai or the rare African weight-loss fruit: "Meet the energizing wonder-leaf, the ancient secret of the Andes, full of all-important B vitamins! Don't guzzle Coke, grab a Coca!"