The question we can't stop asking ourselves: What do the demonstrations mean for America? 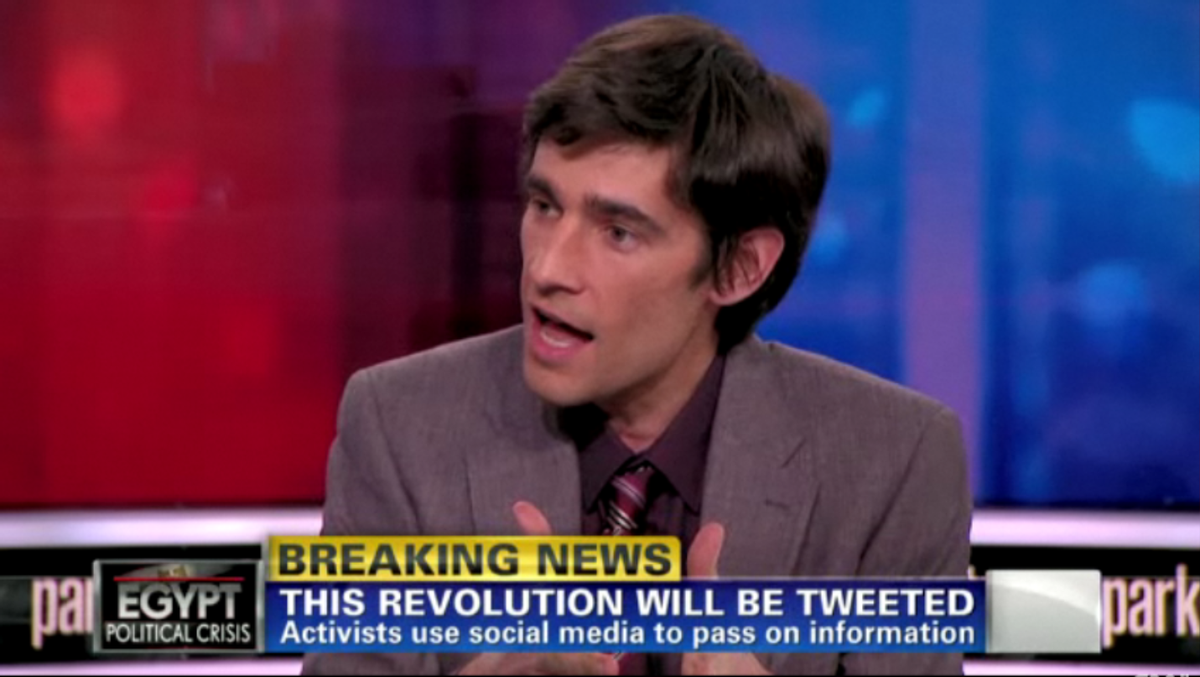 America doesn't really understand how to respond to a revolution. The demonstrations in Egypt have nothing to do with Tea Parties or neoconservatives or Twitter or Facebook or Fox News. But don't tell Americans!

The media is biased in favor of American action. People on CNN and people on Twitter both demand that Barack Obama and the State Department "do something" about the demonstrations. Announce our support for democracy! Use diplomatic voodoo to make Mubarak step down! Prop up a new Egyptian leader and somehow make this revolution spread to Iran! It's understandable: It goes against the nature of the medium to suggest that we just watch and analyze the events of a faraway nation and examine America's role only in a historical sense. But our national narcissism is infecting every corner of the debate, from all sides

I think supporting Mubarak for 30 years was a bad idea, if also an understandable one based on how we've conducted our foreign policy for 100 years, but I can't imagine what moves the administration could make now that would improve the situation in Egypt for anyone. As we've all seen, America produced the tear gas canisters that the police are using against the demonstrators, so if those demonstrations become anti-American in message, we have only ourselves -- and not their religion -- to blame. Obama has, to my mind, struck the right tone -- removed but obviously not particularly supportive of Mubarak -- and demanding a Big Show of Something or Other from America is a recipe for killing the democracy movement in the cradle.

I made some fun of Fox for its apparent determination to stick with domestic issues while Egypt exploded last week, but why shouldn't it continue to do what it's actually designed to do? No "reporting" happens at that "news channel," and its anchors and pundits are not prepared to discuss the details of Egyptian history. Another misleading discussion of deficit spending is far superior to a fact-free segment on how the "good" dictator might be replaced by the wrong Muslims. Its coverage has been amusingly schizophrenic, actually, because a revolution against a dictator is a pretty feel-good story, but the entire channel is terrified of Islam and foreigners. And you can laugh at Fox for that, but that attitude is only a slightly exaggerated version of how the "respectable" American press is treating the story.

When it is discussing Egypt, Fox is still warning about "the Islamists" -- and Fast Company is justifying the American tech media's urge to say the revolt was facilitated by American social media products. (Has anyone written a piece on how Facebook makes the job of a brutal dictator so much easier? You can track every online movement of would-be revolutionaries without your secret police even having to leave the office!)

No one expects Americans to keep themselves out of the story. Of course Time is going to write a piece on what the U.S. "loses" if Mubarak goes and of course Chris Matthews is demanding to know "who our guy" in Egypt is; unless they can think of this in American terms, our pundits have no clue how to deal with foreign affairs in general, let alone massive civil unrest in an Arab nation that's been "stable" for 30 years.

It's obvious that our government is unsure how to speak to us about this. It would be nice if they treated us like grown-ups and said "we supported Mubarak for fairly obviously reasons for many years and so we're a bit wary of seeing him ousted," but that is not how the State Department has ever communicated.

So our liberal Tumblr users feel self-satisfied because they are keeping up with the latest images out of Cairo and our Bush apologists can feel like his entire foreign policy has been justified and our finest foreign affairs bloggers can happily argue with each other over Israel, as they always do, and meanwhile in Egypt thousands of people will fight for their fundamental human rights, a struggle that has very little to do with your opinions on anything.