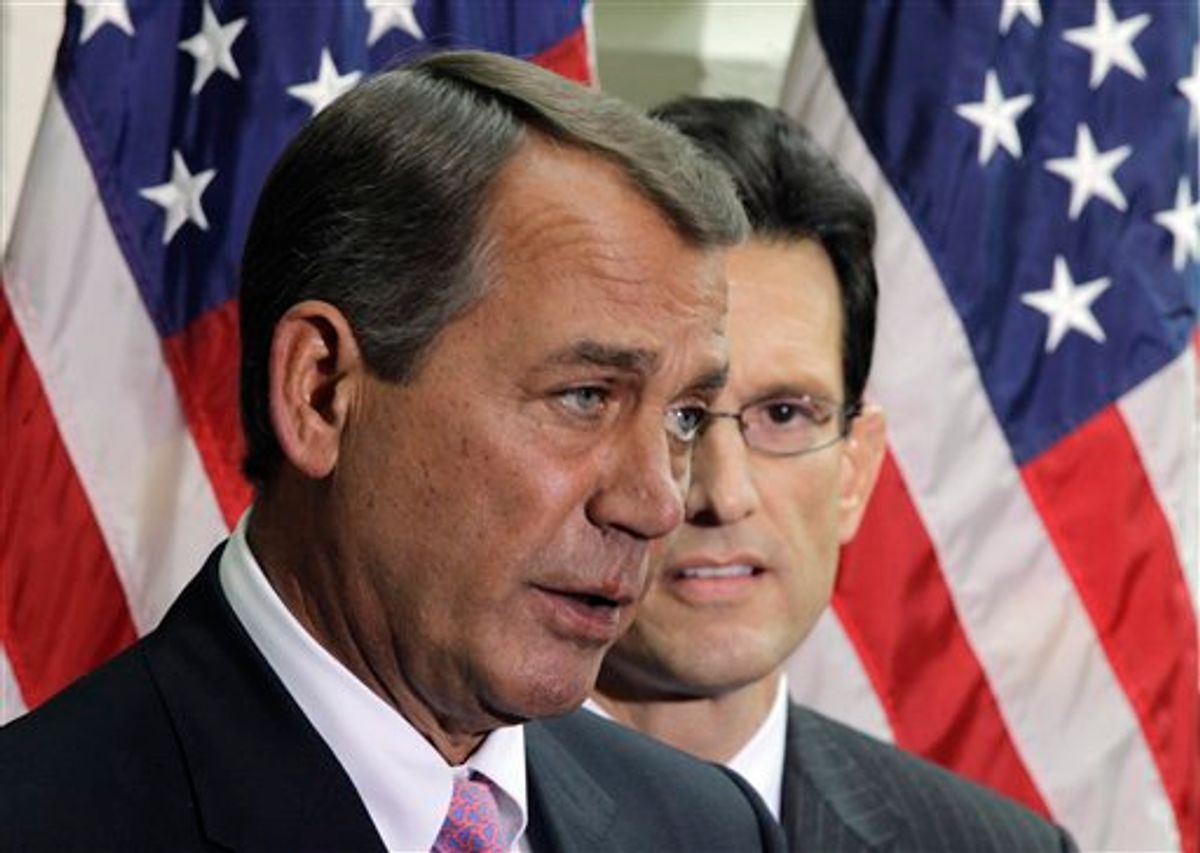 Feminists have opposed legal restrictions to abortion funding for as long as there have been legal abortions. Roe v. Wade was only allowed to exist for three years before the first anti-funding measure, the Hyde Amendment -- its name is uttered in certain circles in much the same way people in Harry Potter movies say always say "Voldemort" -- cracked down, prohibiting federal funding for low-income pregnancies. As part of last year's healthcare struggle, we got the much-loathed Stupak-Pitts amendment, which served the same purpose. In both cases, there was a huge outcry; in both cases, the amendments went forward with only minor changes.

And now there's H.R. 3. The "No Taxpayer Funding For Abortion Act" is bad in all the ways that Hyde and Stupak-Pitts were bad, but it's worse, too: It seeks to make Hyde federal law. Like previous measures, H.R. 3 would have been widely decried, regardless of anything else it contained. But it just so happens to contain one clause that makes it worse than all of those previous measures. It just so happens to redefine rape.

Whereas Stupak-Pitts provides an exemption if "the pregnancy is the result of an act of rape or incest," and Hyde contains exemptions that are similar, H.R. 3 only provides exemptions if the pregnancy results from "an act of forcible rape or, if a minor, an act of incest."

There's no way this change is accidental. And there's no way it's minor. Dan Lipinski, one of the few Democrats co-sponsoring the bill, insists that "the language of H.R. 3 was not intended to change existing law regarding taxpayer funding for abortion in cases of rape." At best, he's tragically misguided. This is a calculated move, which will make exemptions for rape and incest survivors practically unenforceable.

First, there are the people who would be overtly denied coverage, as outlined by Nick Baumann at Mother Jones. Those who were raped while drugged or unconscious, or through means of coercion, would not be covered. Survivors of statutory rape would not be covered: "if a minor," one is only covered in case of incest. And if one is a survivor of incest, and not a minor, that's also not covered. Studies of how rapists find and subdue victims reveal that about 70 percent of rapes wouldn't fall under the "forcible" designation.

Which leaves us with those rapes that could be construed as "forcible." Except that this clause doesn't guarantee an exemption for them, either. The term "forcible rape" actually has no set meaning; legal definitions of "force" vary widely. And every survivor who finds herself in need of abortion funding will have to submit her rape for government approval.

H.R. 3's language brings us back to an ancient, long-outdated standard of rape law: "Utmost resistance." By this standard, a rape verdict depended not on whether the victim consented, but on whether outsiders thought she resisted as hard as humanly possible. Survivors rarely measured up.

There's an example of how "utmost resistance" worked in the 1887 text Defences to Crime. In this case, a man was accused of raping a 16-year-old girl. (A minor, but not incest: Already convicted by current standards, not enough for H.R. 3.) The attacker held her hands behind her back with one of his hands. I asked my partner to test this move's "forcefulness," by holding my wrists the same way; I was unable to break his grip, though he's not much larger than I am, and it hurt to struggle. The attacker then used his free hand and his leg to force open her legs, knocked her off-balance onto his crotch, and penetrated her.

His conviction was overturned. Because the girl was on top. Then, there were the witnesses: One man watched it all, and noted that "though he heard a kind of screaming at first, the girl made no outcry while the outrage was being perpetrated." The physician who examined her testified that "there were no bruises on her person." It was therefore determined that the encounter was consensual. In the words of Defences to Crime, "a mere half-way case will not do ... this was not the conduct of a woman jealous of her chastity, shuddering at the thought of dishonor, and flying from pollution." Stopped screaming eventually? You wanted it.

Rape law is filled with cases like these. Definitions of "force" are still used to make highly subjective judgments that minimize actual violence. H.R. 3 leaves every survivor open to a decision that her attacker wasn't forceful enough, or that she didn't scream enough, or that she didn't struggle enough. "Forcible," like "utmost resistance," can be redefined by anyone in a position to apply it. Under H.R. 3, there is no guaranteed exemption for any survivors; everyone's coverage depends on the case-by-case judgment of a government working from a hugely flawed, inevitably subjective standard.

Which is intentional. Exemptions for rape and incest are a known target of antiabortion groups. John Boehner, who named this bill a top priority for the new Congress, is endorsed by the Republican National Coalition for Life, which requires candidates to prove they "do not justify abortion for innocent babies who are conceived through rape or incest." By my count, 34 co-sponsors of the bill were also endorsed and/or funded by RNCL. It shouldn't be shocking: The goal is no abortions for rape survivors. Because the goal is no abortions, for anyone.

Still, no one wants to be the guy who stands up and says that he's eliminating medical coverage for molested children. For some reason, that's an unpopular stance. Which is why the 183 politicians who sponsor H.R. 3 aren't saying it: They're just quietly changing the language. They want to appear to be preserving exemptions, while eliminating them in practice. They probably hoped no one would notice.

In that case: Whoops. There's been widespread public outcry. There's been massive scrutiny of the clause. There's an ongoing protest, online; I know about that one, because I started it. It's tagged #DearJohn on Twitter, and it includes a campaign to target each and every representative, especially those connected with the bill, and explain to them why it's unacceptable both in terms of rape survivors' rights and in terms of the right to abortion. Even Fox News won't touch it. This push to eliminate victims' rights is a big, messy, costly embarrassment, even for the extremist groups this bill represents.

But it's part of a long history. Feminists have been opposing restrictions to abortion funding for as long as there have been legal abortions. The biggest fear of everyone involved is that things will proceed the way they always do. There's a widespread outcry. We get one concession -- full rape exemptions. And then the bill moves forward, according to plan.