Addressing his nation and the world, Hosni Mubarak announced that he would not run for president in September 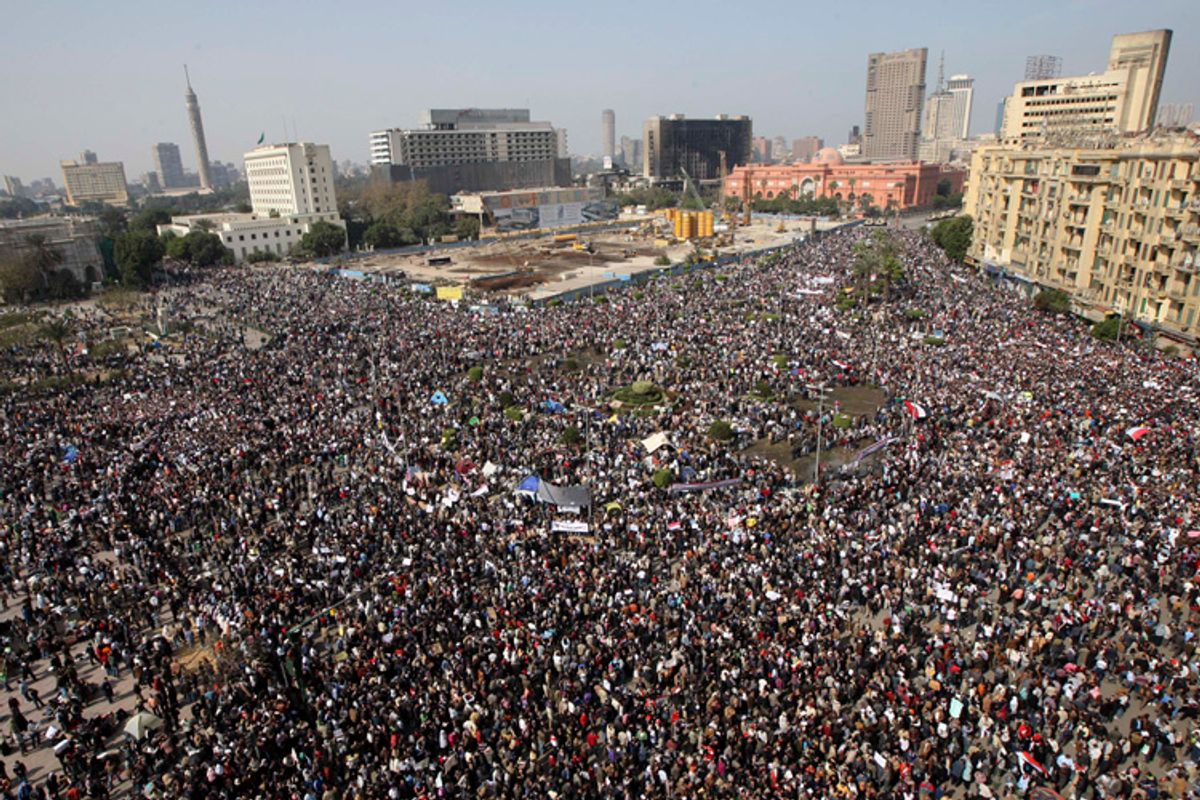 The crowd gathers in Tahrir, or Liberation, Square in Cairo, Egypt, Tuesday, Feb. 1, 2011. Tens of thousands of people flooded into the heart of Cairo Tuesday, filling the city's main square as a call for a million protesters was answered by the largest demonstration in a week of unceasing demands for President Hosni Mubarak to leave after nearly 30 years in power. (AP Photo/Khalil Hamra) (Khalil Hamra)
--

UPDATE (16:14)
President Hosni Mubarak echoed his commitment to Egypt in an address to the nation today. Responding to the massive protests earlier today, he said:

My main responsibility is to restore order and stability to the country.

Along those lines, Mubarak will not step down as president, but rather, will not run for reelection in September.

More than a quarter-million people flooded into the heart of Cairo Tuesday, filling the city's main square in by far the largest demonstration in a week of unceasing demands for President Hosni Mubarak to leave after nearly 30 years in power.

Protesters streamed into Tahrir, or Liberation, Square, among them people defying a government transportation shutdown to make their way from rural provinces in the Nile Delta. The peaceful crowd was jammed in shoulder to shoulder -- schoolteachers, farmers, unemployed university graduates, women in conservative headscarves and women in high heels, men in suits and working-class men in scuffed shoes.

They sang nationalist songs and chanted the anti-Mubarak "Leave! Leave! Leave!" as military helicopters buzzed overhead. Organizers said the aim was to intensify marches to get the president out of power by Friday, and similar demonstrations erupted in at least five other cities around Egypt.

Soldiers at checkpoints set up the entrances of the square did nothing to stop the crowds from entering.

The military promised on state TV Monday night that it would not fire on protesters answering a call for a million to demonstrate, a sign that army support for Mubarak may be unraveling as momentum builds for an extraordinary eruption of discontent and demands for democracy in the United States' most important Arab ally.

"This is the end for him. It's time," said Musab Galal, a 23-year-old unemployed university graduate who came by minibus with his friends from the Nile Delta city of Menoufiya.

Mubarak, 82, would be the second Arab leader pushed from office by a popular uprising in the history of the modern Middle East.

The loosely organized and disparate movement to drive him out is fueled by deep frustration with an autocratic regime blamed for ignoring the needs of the poor and allowing corruption and official abuse to run rampant. After years of tight state control, protesters emboldened by the overthrow of Tunisia's president last month took to the streets on Jan. 25 and mounted a once-unimaginable, relentless series of protests across this nation of 80 million people -- the region's most populous country and the center of Arabic-language film-making, music and literature.

Mubarak's weakening hold on power has forced the world to plan for the end of a regime that maintained three decades of peace with Israel and relative stability despite a powerful domestic Islamist terrorist threat, even as its human rights record was constantly criticized the gap between rich and poor widened.

Nearly half of Egypt's 80 million people live under or just above the poverty line set by the World Bank at $2 a day.

Troops and Soviet-era and newer U.S.-made Abrams tanks stood at the roads leading into Tahrir Square, a plaza overlooked by the headquarters of the Arab League, the campus of the American University in Cairo, the famed Egyptian Museum and the Mugammma, an enormous winged building housing dozens of departments of the country's notoriously corrupt and inefficient bureaucracy.

The protesters were more organized than on previous days. Volunteers wearing tags reading "the People's Security" circulated through the crowds, saying they were watching for government infiltrators who might try to instigate violence.

"We will throw out anyone who tries to create trouble," one announced over a loudspeaker. Other volunteers joined the soldiers at the checkpoints, searching bags of those entering for weapons. Organizers said the protest would remain in the square and not attempt to march to avoid frictions with the military.

Two dummies representing Mubarak were hung from traffic lights. On their chests was written: "We want to put the murderous president on trial." Their faces were scrawled with the Star of David, an allusion to many protesters' feeling that Mubarak is a friend of Israel, still seen by most Egyptians as their country's archenemy more than 30 years after the two nations signed a peace treaty.

Every protester had their own story of why they came -- with a shared theme of frustration with a life pinned in by corruption, low wages, crushed opportunites and abuse by authorities.

Sahar Ahmad, a 41-year-old school teacher and mother of one, said she has taught for 22 years and still only makes about $70 a month.

"There are 120 students in my classroom. That's more than any teacher can handle," said Ahmad. "For me, change would mean a better education system I can teach in and one that guarantees my students a good life after school. If there is democracy in my country, then I can ask for democracy in my own home."

Tamer Adly, a driver of one of the thousands of minibuses that ferry commuters around Cairo, said he was sick of the daily humiliation he felt from police who demand free rides and send him on petty errands, reflecting the widespread public anger at police high-handedness.

"They would force me to share my breakfast with them ... force me to go fetch them a newspaper. This country should not just be about one person," the 30-year-old lamented, referring to Mubarak.

Among the older protesters there was also a sense of amazement after three decades of unquestioned control by Mubarak's security forces over the streets.

"We could never say no to Mubarak when we were young, but our young people today proved that they can say no, and I'm here to support them," said Yusra Mahmoud, a 46-year-old school principal who said she had been sleeping in the square alongside other protesters for the past two nights.

Authorities shut down all roads and public transportation to Cairo, security officials said. Train services nationwide were suspended for a second day and all bus services between cities were halted.

All roads in and out of the flashpoint cities of Alexandria, Suez, Mansoura and Fayoum were also closed.

The officials said thousands of protesters gathered in Alexandria, Suez, the southern province of Assiut, the city of Mansoura north of Cairo, and Luxor, the southern city where some 5,000 people protested outside its iconic Ancient Egyptian temple on the east bank of the Nile.

The officials spoke on condition of anonymity because they were not authorized to speak to the media.

Normally bustling, Cairo's streets outside Tahrir Square had a fraction of their normal weekday traffic.

Banks, schools and the stock market in Cairo were closed for the third working day, making cash tight. Long lines formed outside bakeries as people tried to replenish their stores of bread, for which prices were spiraling.

An unprecedented shutdown of the Internet was in its fifth day after the last of the service providers abruptly stopped shuttling Internet traffic into and out of the country.

Cairo's international airport remained a scene of chaos as thousands of foreigners sought to flee.

The official death toll from the crisis stood at 97, with thousands injured, but reports from witnesses across the country indicated the actual toll was far higher.

The protesters -- and the Obama administration -- roundly rejected Mubarak's appointment of a new government Monday afternoon that dropped his highly unpopular interior minister, who heads police forces and has been widely denounced by the protesters. Mubarak was shown making the appointment on state television but made no comment.

Then, hours after the army's evening announcement said it would not use force on the protesters, Vice President Omar Suleiman -- appointed by Mubarak only two days earlier in what could be a sucession plan -- went on state TV to announce the offer of a dialogue with "political forces" for constitutional and legislative reforms.

Suleiman did not say what the changes would entail or which groups the government would speak with. Opposition forces have long demanded the lifting of restrictions on who is eligible to run for president to allow a real challenge to the ruling party, as well as measures to ensure elections are fair. A presidential election is scheduled for September.

Unity was far from certain among the array of movements involved in the protests, with sometimes conflicting agendas -- including students, online activists, grass-roots organizers, old-school opposition politicians and the fundamentalist Muslim Brotherhood, along with everyday citizens drawn by the exhilaration of marching against the government.

The various protesters have little in common beyond the demand that Mubarak go. Perhaps the most significant tensions among them is between young secular activists and the Muslim Brotherhood, which wants to form a state governed by Islamic law but renounced violence in the 1970s unlike other Islamist groups that waged a violent campaign against the government in the 1980s and 1990s. The more secular are deeply suspicious the Brotherhood aims to co-opt what they contend is a spontaneous, popular movement. American officials have suggested they have similar fears.

A second day of talks among opposition groups at the headquarters of the liberal Wafd party fell apart after many of the youth groups boycotted the meeting over charges that some of the traditional political parties have agreed to start a dialogue with Suleiman.

Nasser Abdel-Hamid, who represents pro-democracy advocate Mohamed ElBaradei, said: "We were supposed to hold talks today to finalize formation of a salvation front, but we decided to hold back after they are arranging meetings with Sulieman."

The U.S. State Department said that a retired senior diplomat -- former ambassador to Egypt Frank Wisner -- was now on the ground in Cairo and will meet Egyptian officials to urge them to embrace broad economic and political changes that can pave the way for free and fair elections.

In a nod to the suspicions, Brotherhood figures insist they are not seeking a leadership role.

Still, Brotherhood members appeared to be joining the protest in greater numbers and more openly. During the first few days of protests, the crowd in Tahrir Square was composed of mostly young men in jeans and T-shirts.

Many of the volunteers handing out food and water to protesters were men in long traditional dress with the trademark Brotherhood appearance -- a closely cropped haircut and bushy beards.