Richard Cohen: Egyptian democracy will be "a nightmare" 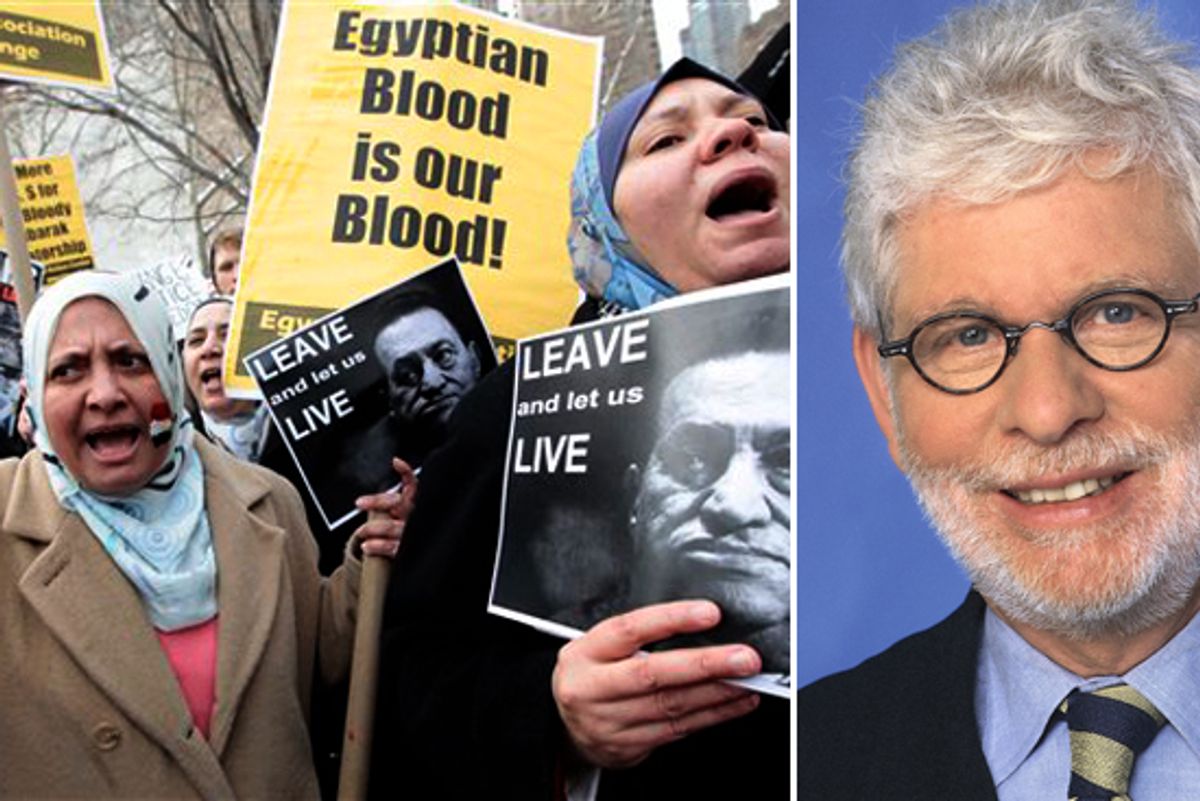 Nothing saddens Richard Cohen more than the sight of hundreds of thousands of Egyptians peacefully protesting. The longtime Washington Post columnist is sad because those childish Arab Muslims might end up with a democracy, but they don't know how democracy works. Here is how democracy works: We like it unless "the people" want something that complicates our current foreign policy objectives.

Cohen is just broken up about this. "Egypt, once stable if tenuously so, has been pitched into chaos." "The dream of a democratic Egypt," he says, "is sure to produce a nightmare." It is sure to. Such a nightmare it will be. Just not anywhere near as pleasant as these last 30 years of "stability" have been, for everyone.

Cohen is totally an expert on Egypt and Muslims, because he is a longtime opinion columnist for the Washington Post, and not at all a blinkered idiot. Egypt "lacks the civic and political institutions that are necessary for democracy," he tells us. And you can't argue with that. I mean, do Egyptian newspapers even run syndicated Richard Cohen opinion columns? Do they have "Dancing With the Stars," to teach them how voting works?

My take on all this is relentlessly gloomy. I care about Israel. I care about Egypt, too, but its survival is hardly at stake. I care about democratic values, but they are worse than useless in societies that have no tradition of tolerance or respect for minority rights. What we want for Egypt is what we have ourselves. This, though, is an identity crisis. We are not them.

No. We are not them, at all. Because they are Muslims. We all know Americans could handle democracy because we were super good at respecting the rights of minority groups. But the Egyptians are sometimes resentful of or even violent against minority groups, so no democracy allowed for them. (While some Coptic Christians worry that a more Islamic Egyptian government would be less friendly to Copts, demonstrators are stressing an inclusive, nationalist message, and there's evidence that Christians are themselves involved in the protests. The right-wing CBN has even filed a report on the growing "bond" between Christians and "their Muslim neighbors" in Egypt.)

Cohen is concerned that the Muslim Brotherhood -- which "runs the Gaza Strip" under the name "Hamas," he tells us -- will take control of Egypt and attack Israel, at which point "the mob currently in the streets will roar its approval." That "mob" certainly does seem pretty bloodthirsty. They clearly want all-out war with the region's sole nuclear power. Pretty sure that's what these demonstrations are about. "I'm actually pretty cool with Mubarak but I really wish we were waging war against Israel right now" -- An Egyptian protester.

Cohen seems to understand that the Brotherhood, while involved in the demonstrations, did not organize them, and he has been told that the majority of the demonstrators have no ties to the group, but he thinks that might just be because they are sneaky. "It has been underground for generations -- jailed, tortured, infiltrated, but still, somehow, flourishing. Its moment may be approaching." Scary!

And why should we all be super-scared of them? "The Islamists of the Brotherhood do not despise America for what it does but for what it is." Thanks, Richard Cohen, for explaining who these Islamists are, and what they despise about us. It's not our lengthy history of propping up the dictator who brutally repressed them -- they hate us for our freedom. (You may compare Richard Cohen's history of the Muslim Brotherhood to that an an actual expert on the subject, if you wish.)

This column is so full of winning lines, I have to stop myself from quoting the entire thing. There is literally an "I like democracy, but" part: "Majority rule is a worthwhile idea. But so, too, are respect for minorities, freedom of religion, the equality of women and adherence to treaties, such as the one with Israel, the only democracy in the region."

I'm sorry, I can edit that one to more clearly express Cohen's actual point: "Majority rule is a worthwhile idea. But so, too ... [is] respect for... Israel...."

These are the last lines:

Poor Egypt. Maybe you will be grown-up enough in the eyes of Richard Cohen to handle a democracy someday, but right now, it's just not in the cards.