What other dictators does the U.S. support?

Aside from Hosni Mubarak in Egypt, here are the other most controversial leaders propped up by the U.S. 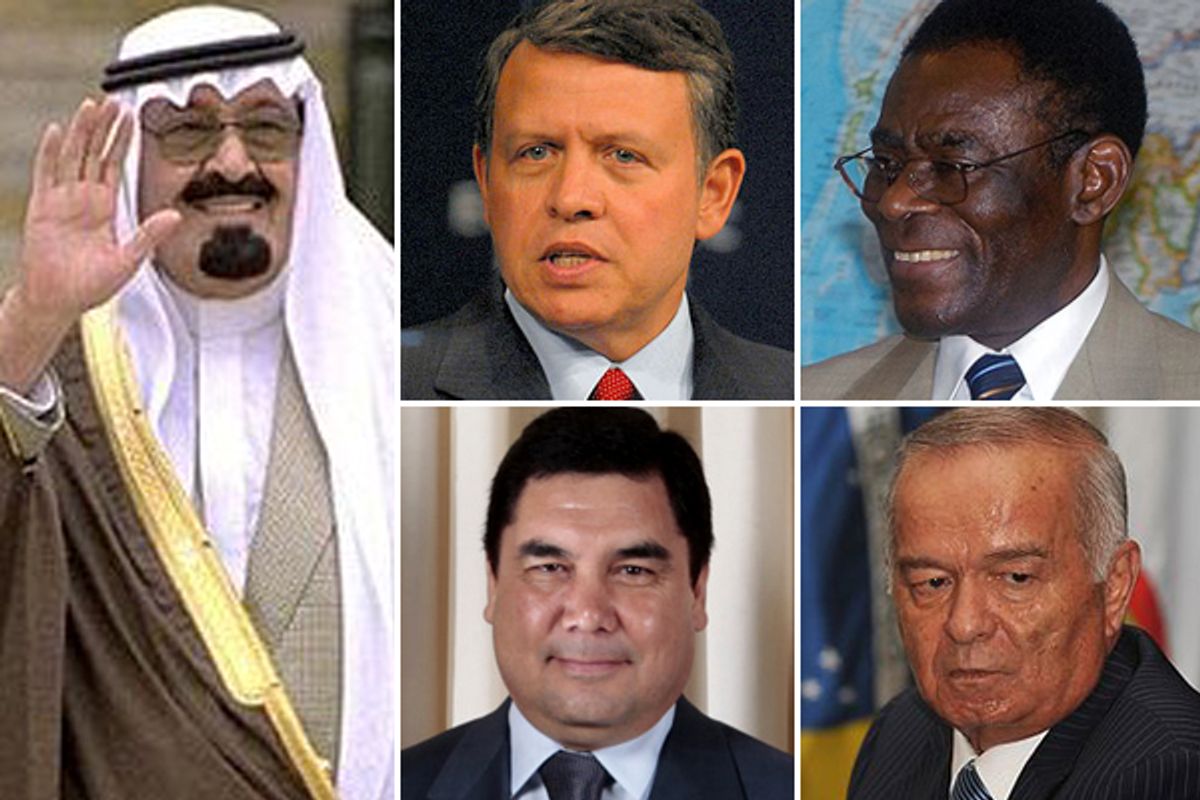 As Egyptian pro-democracy protests rage on, media attention has suddenly focused on the U.S. alliance with the country's authoritarian rulers. American support for the Egyptian government -- to the tune of $60 billion in aid over the last 30 years -- garnered virtually no regular attention before the protests began.

There are now reports of anti-American sentiment among the Egyptian protesters, who are angry about U.S. support for Hosni Mubarak over the years and about the Obama administration's hesitance to throw its full support behind the movement. A powerful symbol has emerged in tear gas canisters bearing "Made in the USA" labels that police have fired into the crowds.

So this is a good moment to take a look at where else in the world American taxpayer dollars are helping to prop up dictatorships with poor human rights records. The below examples are the most controversial ones, though not a comprehensive accounting.

While the U.S. does not provide direct military aid to oil-rich Saudi Arabia, it maintains extremely close ties to the government, a monarchy led by King Abdullah. The Obama administration announced last November it is seeking a massive $60 billion, 20-year weapons sale to the Saudis, which would reportedly include 84 F-15 fighter aircraft and almost 200 helicopters, as well as trainers, simulators, generators, spare and repair parts, and other related elements of program support, according to CNN. The final details of that deal are still being worked out.

Meanwhile, the Saudi government has maintained an abysmal human rights record. Human Rights Watch summarized the situation in its annual report: "Authorities continue to  systematically suppress or fail to protect the rights of nine million Saudi women and girls, eight million foreign workers, and some two million Shia citizens. Each year thousands of people receive unfair trials or are subject to arbitrary detention. Curbs on freedom of association, expression, and movement, as well as a pervasive lack of official accountability, remain serious concerns."

The United States gave Jordan, another Middle Eastern monarchy, $300 million in military aid in 2010. In response to recent protests, King Abdullah II of Jordan this week dismissed his cabinet and appointed a new prime minister. And, according to Human Rights Watch, violations of basic freedoms are not uncommon in Jordan. The group said in its annual report: "Torture, routine and widespread in recent years, continues, in particular at police stations, where complaints about ill-treatment increased in 2009 and again in 2010." There is also no freedom of speech in Jordan, with steep penalties for criticizing the king or the government.

The Obama administration, like the Bush administration before it, has been pursuing closer ties with Turkmenistan, which both borders Afghanistan and has some of the largest proven gas reserves in the world. The United States sends supplies for the Afghan war through Turkmenistan, which is part of the northern corridor into Afghanistan, a crucial alternative to dangerous supply routes through Pakistan. Turkmenistan received $2 million in military aid in 2010, up from just $150,000 in 2009. Because of its strategic importance in Central Asia, the country has been graced by visits from top U.S. officials, including Gen. David Petraeus.

It seems not to matter to U.S. policymakers that Turkmenistan is run by one of the most repressive regimes in existence. Its current president, Gurbanguly Berdymukhamedov, was the dentist of the previous president-for-life, who died in 2006. The regime, alternatively described in the press as "Stalinist" and "hermit-like," presides over the following impressively long list of human rights violations, according to a 2009 State Department report:

The issue of human rights, however, did not figure prominently when Hillary of Clinton met with Berdymukhamedov in 2009.

Like Turkmenistan, this Central Asian nation is important to the United States because of its border with Afghanistan and its energy resources. Its president since 1991, Islam Karimov, was reelected in 2000 with 92 percent of the vote and again in 2007 with 88 percent; political opposition has been repressed. Torture is common, and the Guardian reported in 2003 that two prisoners were even boiled to death.

The Bush administration began to woo Karimov as an ally after Sept. 11 and the invasion of Afghanistan, including with aid to the police and intelligence service. The U.S. imposed sanctions after a 2005 massacre of protesters by Karimov, but they were lifted a few years later, and the Obama administration has sought to repair the relationship. The country is currently a key supply route to Afghanistan from the north.

President Teodoro Obiang Nguema Mbasogo has ruled Equatorial Guinea since he took over in a coup in 1979. Starting in the 1990s, American companies discovered large oil reserves in waters belonging to the West African nation. The Bush administration presided over a concerted effort to improve relations with Equatorial Guinea, including high-level meetings between Obiang and Bush and the reopening of the American embassy in the capital city of Malabo. Seen as an alternative to Arab oil, Obiang won praise from Condoleezza Rice in 2006 as a "good friend" of the United States. While Equatorial Guinea does not receive direct military aid, it has taken part in the American International Military Education and Training program.

Human Rights Watch reports that Guinea is "mired in corruption, poverty, and repression under the leadership of" Obiang and that "the government regularly engages in torture and arbitrary detention." Oil revenues are distributed to the president's family and allies, with his son reportedly spending more on luxury goods between 2004 and 2007 than the country's annual education budget.

The Obama administration has not substantially changed course on Equatorial Guinea. A smiling Obama posed for a picture with Obiang at an event at the Metropolitan Museum in New York in 2009, and the picture now holds a prominent place on the official website of the government of Equatorial Guinea. (The regime, by the way, also retains the services of Washington lobbyist Lanny Davis.)

As I mentioned above, this is my no means a comprehensive list. The Center for Public Integrity did a useful project looking at U.S. military aid and human rights around the world a few years back. Much of that report is still relevant today.