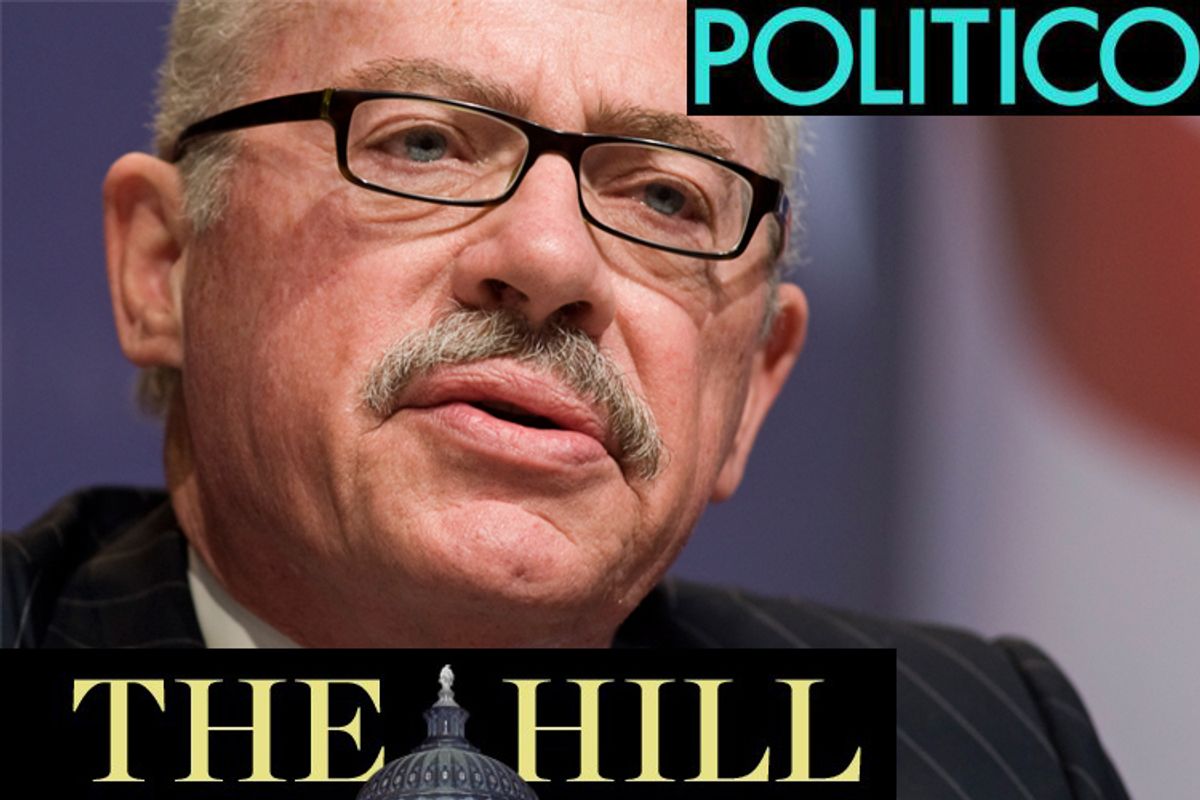 Former congressman Bob Barr has been writing opinion columns over the last several months advocating for the for-profit schools industry but has failed to disclose that he is employed as an adjunct professor at one such school in Atlanta. Editors at The Hill and Politico, where Barr's columns have appeared, now say that he should have disclosed the conflict of interest.

Barr, who left Congress in 2003, ran for president as a Libertarian in 2008 and has since become a lobbyist (most recently he was in the news for representing Haiti's ex-dictator, "Baby Doc" Duvalier). Over the past six months, Barr has weighed in at least three times in a fierce battle over proposed federal regulation of the for-profit schools industry, which, led by companies like the University of Phoenix, has experienced explosive, deregulation-fueled growth over the past decade.

Primarily at issue are proposed Department of Education rules that would cut off federal student loans to for-profit schools whose students default at high rates. The industry has been criticized for enticing students to take out large federally-guaranteed loans; when the students default, as they do at notably high rates, the companies still get paid -- with taxpayer money. Naturally, the industry has been fighting this proposed regulation in Washington.

This month, when the focus of the industry and one of its key lobbying outfits, the Coalition for Educational Success, turned to attacking a GAO report that criticized for-profit schools, Barr appeared on the scene again. On Wednesday, he wrote a column in Politico that closely echoed the talking points of the industry. Criticism of for-profit schools -- or as Barr calls then, "proprietary colleges" -- "appears to be driven as much by jealousy and a desire for headlines as bona fide concern for educational standards," he wrote. And in a post on his Atlanta Journal-Constitution blog in December, Barr complained that "proprietary colleges [are] bullied by the government."

But none of these columns disclosed what would seem to be an obvious conflict of interest: Barr himself works at a for-profit school, John Marshall Law School in Atlanta. Here is the syllabus for his once-a-semester course on Constitutional interpretation.

Emmanuel Touhey, comment editor at The Hill, said in an email that Barr should have disclosed his work for the industry.

"Bob Barr should have disclosed it in the tagline of any piece that he submitted and failure to do so is both unfortunate and unfair to our readers. I expect all writers on the Congress Blog to disclose any and all conflicts of interest for the benefit of our readers so they can make up their own mind about what they read. In this case, that appears not to have happened and that's very disappointing," Touhey said.

Politico Opinion Editor Allison Silver said: "Full disclosure is always best. Readers need to know things like this." Barr's work for the industry has now been added to his bio on the Politico column.

Through an assistant, Barr explained that "I have very high regard for such schools and have been intrigued by the on-going controversy." He has not responded to a question about whether he should have disclosed his work for the industry.