Omar Suleiman that foreigners caused escalation of violence, calls for an end to hostilities 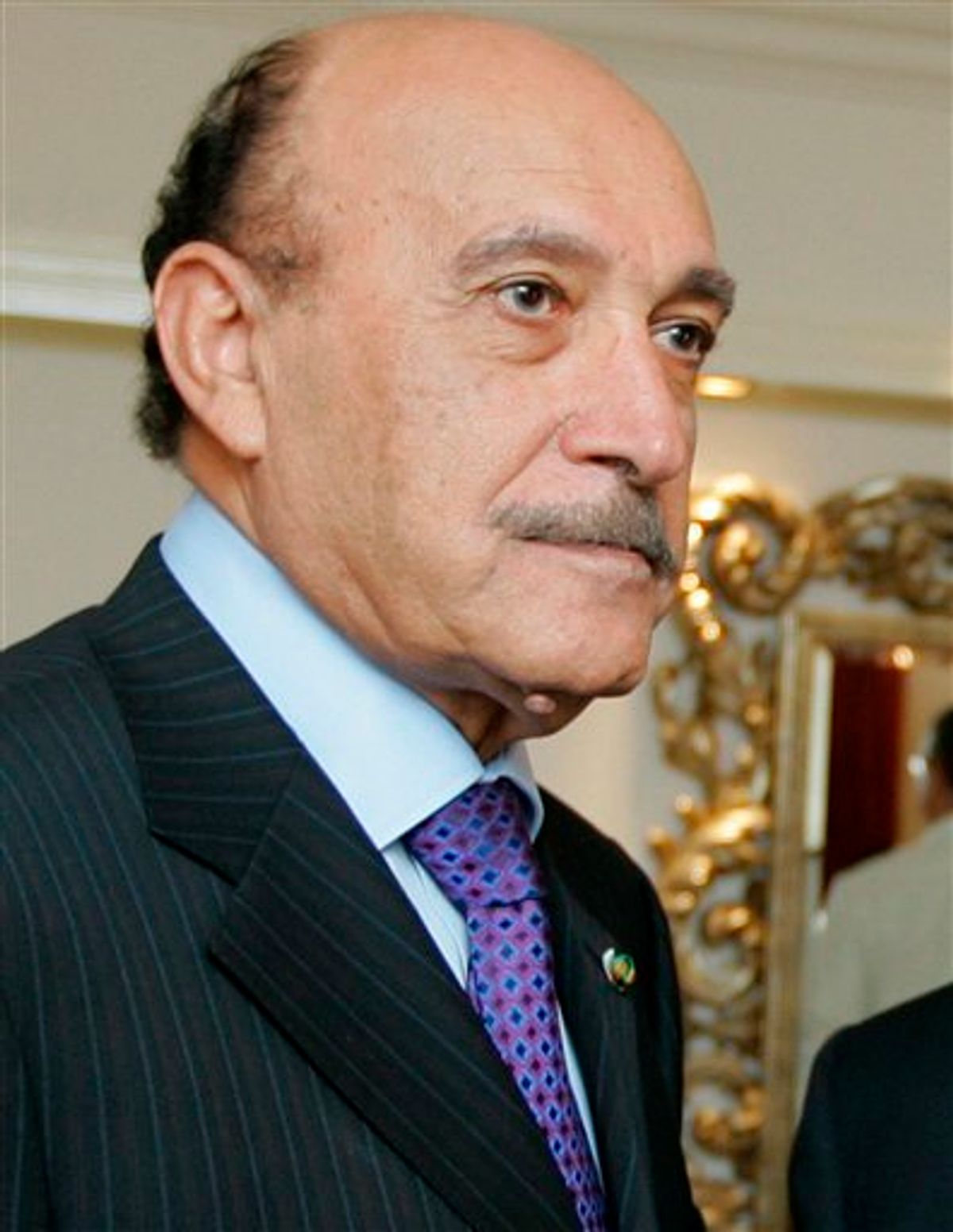 Egypt's vice president blames foreigners, a major opposition group and businessmen for fueling the anti-government protests that have rocked the country for the past 10 days.

Omar Suleiman, in an interview with state television broadcast nationwide, outlined the military's role in the chaos for the first time. He said they are on the streets to enforce the curfew, protect people against thugs and to make up for the police's lack of capabilities to deal with the unrest.

Protesters and regime supporters skirmished in a second day of rock-throwing battles at a central Cairo square while new lawlessness spread around the city. New looting and arson erupted, and gangs of thugs supporting President Hosni Mubarak attacked reporters, foreigners and rights workers while the army rounded up foreign journalists.

Under an onslaught of international condemnation for the assault on protesters by pro-Mubarak rioters that sparked the renewed wave of turmoil, the government offered a series of gestures trying to calm the fury.

The prime minister apologized for Wedneday's assault and acknowledged it may have been organized. The vice president promised that Mubarak's son -- Gamal -- would not run to succeed his father in presidential elections in September, and prosecutors announced an assets freeze and travel ban on three former minister who were among the most unpopular regime figures.

But the gestures appeared likely to be swept away by the turmoil around Tahrir, or Liberation, Square, which for the past 10 days has been the center of the unprecedented movement demanding Mubarak's ouster. Protesters accuse the regime of organizing a force of paid thugs and police in civilian clothes to attack them Wednesday afternoon, sparking the violence that still rages after nightfall Thursday.

Mubarak supporters, who were largely being beaten back by protesters in the square, launched a series of attacks and harassment against journalists, and the U.S. State Department condemned what it called a "concerted campaign to intimidate" the media. Foreign journalists were beaten with sticks and fists by pro-government mobs on the streets Cairo on Thursday and dozens were reported detained by security forces.

Lawlessness that had largely eased since the weekend flared anew. A fire raged in a major supermarket outside Sheikh Zayed, a suburb of the capital, and looters were ransacking the building. A residential building neighboring a 5-star hotel on the Nile River corniche was also ablaze, blocks away from Tahrir. Other fires erupted in the Cairo district of Shubra, north of the center, security officials said, speaking on condition of anonymity because they were not authorized to talk to the media.

At least eight people have been killed and hundreds wounded in the fighting in and around Tahrir.

The military finally took its first muscular action after a barrage of deadly automatic weapons fire against the protesters before dawn Thursday. Soldiers pushed back the pro-government attackers and took up positions between the two sides.

But then Thursday afternoon, the soldiers stepped aside as the anti-government side surged ahead in the afternoon in resumed clashes.

With volleys of stones, the protesters pushed back their rivals swarmed onto a nearby highway overpass that their regime supporters had used as a high ground to batter them. The battle centered on and under the overpassed, where heavy gunfire was heard. At least one wounded person was carried away.

Prime Minister Ahmed Shafiq acknowledged that the attack "seemed to have been organized" and said elements had infiltratated what began as a demonstration against the protesters to turn it violent. But he said he didn not know who, promising an investigation into who was behind it.

Shafiq, a former air force general appointed by Mubarak over the weekend, said he was willing to go to Tahrir to meet protesters but urged them to disperse. At a press conference aired on state TV, Shafiq defended Mubarak's announcement this week that he would serve out the remaining seven months of his term. "Would it be dignified for a nation for its president to leave immediately? .. There are ethics that must be observed."

The notion that the state may have coordinated violence against protesters, whose vigil in Tahrir Square had been peaceful for days, raised international outrage. It brought a sharp rebuke from Washington, which sends Egypt $1.5 billion a year in aid.

"If any of the violence is instigated by the government, it should stop immediately," said White House Press Secretary Robert Gibbs.

The anti-Mubarak movement has vowed to intensify protests to force the president out by Friday. In a speech Tuesday night, Mubarak refused to step down immediately, saying he would serve out the remaining seven months of his term -- a halfway concession rejected by the protesters.

On Thursday, a sense of victory ran through the protesters, even as they organized their ranks in the streets in case of a renewed assault.

"Thank God, we managed to protect the whole area," said Abdul-Rahman, a taxi driver who was among thousands who stayed hunkered in the square through the night, hunkered down against the thousands besieging the entrances. "We prevented the pro-Mubarak people from storming the streets leading to the square." He refused to give his full name.

Bands of Mubarak supporters moved through side streets, trading volleys of stone-throwing with the protesters and attacking cars to stop supplies from reaching the protest camp. One band stopped a car, ripped open the trunk and found boxes of juice, water and food, which they took before forcing the driver to flee.

The Mubarak backers seethed with anger at a protest movement that state TV and media have depicted as causing the chaos and paralyzing businesses and livelihoods. "You in Tahrir are the reason we can't live a normal life," one screamed as he threw stones in a side street.

The anti-Mubarak youths posted sentries on the roofs and balconies of buildings around the square to raise the alert of any approaching attackers and rain stones on them. Other look-outs in the streets banged metal poles against pedestrian barriers alarm when they sighted incoming Mubarak backers.

One sentry waved his arms in the air like an airport runway traffic controller, directing defenders carrying piles of stones as ammunition to a side street to fend off an assault. But then another sentry waved a hand across his chest horizontally in a new signal. The crowd understood: false alarm, and they melted back into the square.

The men who led the defense Wednesday and throught the night were easily identified. Many of them had cotton padding and grubby bandages dangling from their faces, arms and legs. Many had chunks of rock stuck to their hair and clumps of dust in their beards. A large number had the trimmed beards of Muslim conservatives, a sign of how the Muslim Brotherhood a major role in the fight.

Wednesday's assault began in the afternoon, when thousands of pro-Mubarak attackers broke into the square where some 10,000 protesters were gathered. Among the attackers were men who charged in on horses and camels, lashing people with whips.

Anti-Mubarak demonstrators traded showers of rocks and other projectiles in a counter-assault that drove their assailants out of the square within hours. The protesters took army trucks and set up an ad-hoc front line on the northern edge of the square, near the Egyptian Museum. The two sides traded volleys of rocks and Molotov cocktails for much of the night.

The escalation came around 4 a.m. when sustained bursts of automatic gunfire and single shots rattled the darkness for more than two hours. Protest organizer Mustafa el-Naggar said the gunfire came from at least three locations in the distance

Soon after, the military moved. Four tanks cleared a highway overpass from which Mubarak supporters had hurled rocks and firebombs onto the protesters. On the streets below, several hundred soldiers carrying rifles lined up between the two sides, pushing the pro-government fighters back and blocking the main battle lines in front of the famed Egyptian Museum and at other entrances to the square.