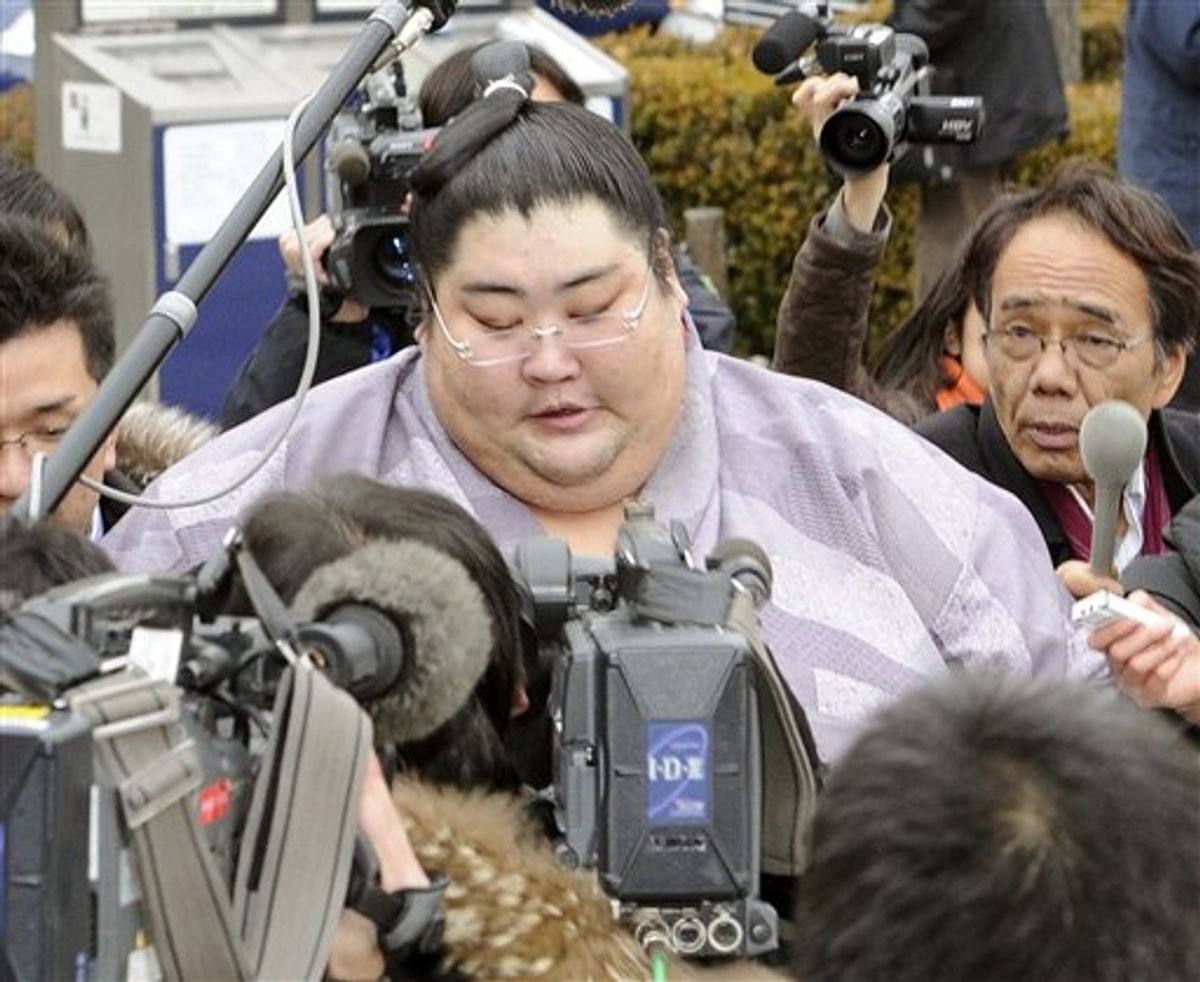 Sumo wrestler Yamamotoyama is surrounded by Japanese reporters after he was questioned by sumo elders in an emergency meeting at the Ryogoku Kokugikan sumo arena in Tokyo on Wednesday Feb. 2, 2011. Fresh off a gambling scandal that deeply sullied its image, Japan's national sport of sumo wrestling is now grappling with allegations that senior wrestlers and coaches used cell phones to plan how to fix bouts. (AP Photo/Kyodo News) JAPAN OUT, CREDIT MANDATORY, FOR COMMERCIAL USE ONLY IN NORTH AMERICA (AP)
--

Media reports said police are also now investigating whether active wrestlers bet on the outcome of bouts, deepening concerns that gangsters -- who allegedly played a role in an earlier gambling scandal -- may again be involved.

The widening scandal has become a national embarrassment to Japan, where the sport is followed by millions of fans and considered an important part of the country's cultural heritage.

"If it is true, it is a very serious betrayal of the people," he said.

The three are seen as the tip of the iceberg. All told, more than a dozen wrestlers or coaches have been implicated in the scandal, and all top competitors are being questioned in an internal investigation launched by the sumo association.

Most Japanese consider sumo -- which traces its origins to religious purification rites -- to be more than just a sport. Seen as the keepers of a prized tradition, wrestlers are expected to observe a high standard of public behavior and wear their hair in topknots like the samurai of old.

But the recent spate of scandals has sent sumo's popularity into a nosedive.

Two TV networks said they were withdrawing their backing of competitions ahead of the next major tournament in March. The head of Japan's public broadcaster, NHK, indicated that it might cancel live coverage of the March tournament if the scandal deepens.

"I don't think the nation would support the tournament unless serious action is taken," said Kan Suzuki, the deputy education and sports minister. He added that sumo's special status affording it government backing and tax exemptions may be rescinded.

Police found text messages on confiscated mobile phones that implicate as many as 13 wrestlers in schemes to fix matches, the sumo association said Wednesday. One reportedly went into detail about how he would attack and how he wanted his opponent to fall.

The text messages indicate that the wrestlers routinely fixed bouts and charged hundreds of thousands of yen (thousands of dollars) per match to do so.

The cell phones of wrestlers were confiscated after several were arrested last year for allegedly betting illegally on baseball games with gangsters as go-betweens. That scandal followed allegations in 2009 of widespread marijuana use among the ranks that led to the expulsion of three Russian fighters, and the hazing death of a young wrestler in 2007.

During the JSA's investigation, Chiyohakuho initially denied being involved but later admitted to match fixing after being asked about the text message suggesting it.

Unsubstantiated allegations of gangster involvement in bout-fixing have plagued the sport for decades, but have never been proved.