When corporations dabble in politics, the Constitution says you aren't allowed to boycott or protest them 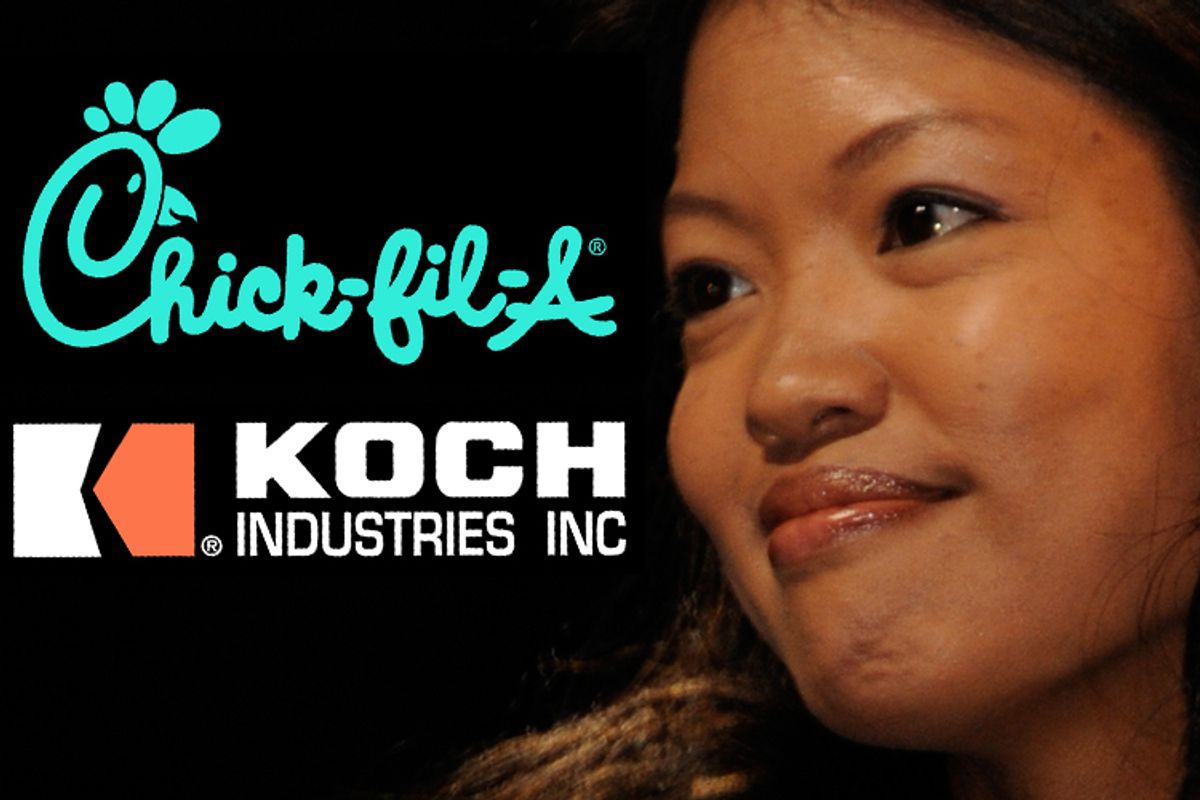 As we all know, billionaires and huge successful corporations are afforded certain inalienable rights under the First Amendment, including the right to spend billions on rolling back regulations of their chosen industries and the right to not ever suffer any sort of popular backlash for their actions. (That second right is best explicated by noted legal scholar Sarah Palin, whose interpretation of the Bill of Rights is based on the extensive research performed by Usenet trolls and banned blog commenters.) But some people (liberals) don't believe in freedom. These liberal bigots are trampling on the rights of some of America's most vulnerable citizens: the Koch brothers and the fast-foot chain Chik-fil-A.

The Koch brothers, who use their vast fortunes to encourage the creation of political consensus around various government policies that allow them to pollute as much as they want in order to make as much of a profit while sacrificing as little of said fortunes to the tyrannical government as possible (they'd rather spend a million dollars on a libertarian think tank than see one cent of that hard-earned money go to a wasteful big government school lunch program), held their annual retreat in Rancho Mirage, Calif., last weekend. A bunch of liberals protested the event, in order to call attention to the obscene wealth of the brothers and the ways they use that wealth to quietly influence the political process in their favor.

That protest, across the street from the event, was "an open assault on the rights of association," according to a lawyer who believes that restrictions on corporate campaign spending are violations of the right to free speech. (Not only is money speech, it is also apparently the only acceptable form of speech.) Various people were arrested.

Yesterday, Politico's Kenneth Vogel published a very good piece on how the Kochs are "fighting back" against their significantly less rich and influential critics. In addition to aggressive P.R., legal threats and attempts to win the cooperation of reporters by doling out formerly unheard-of access, they have also, in the words of Jon Chait, hired goons.

It is so rude of liberals to dislike the Kochs and to write about what they do, and sometimes protest their secret enclaves. And that is why their goons are perfectly justified in threatening to lock up Politico reporters, in jail, for photographing things.

A perhaps even more egregious example of liberal intolerance is the fact that some blogs wrote some things about how the owners of Chick-fil-A are anti-gay Christians. Or, as Michelle Malkin put it in yesterday's National Review Online, "several progressive-activist blogs have waged an ugly war against Chick-fil-A."

So far the actions taken against this company include, in addition to blog posts, an online petition and some Facebook groups. That's about it. Even excitable New York college students aren't bothering to protest. There was a New York Times article about it, though. On the whole, a couple thousand people probably learned what many others already knew about the owners of Chick-fil-A, and many more people almost certainly "learned" that evil thug leftists were attacking Chick-fil-A for the crime of loving God, and marriage. Malkin, again:

This is not because they care about winning hearts and minds over gay rights or marriage policy, but because their core objective is to marginalize political opponents and chill Christian philanthropy and activism. The fearsome "muscle flexing" isn’t being done by innocent job-creators selling chicken sandwiches and waffle fries. It’s being done by the hysterical bullies trying to drive them off of college grounds and out of their neighborhoods in the name of "human rights."

Did you know that I'm "flexing my muscles" by merely writing the words "if you are gay or support gay marriage you might want to reconsider eating at Chick-fil-A"? I am brutally marginalizing Christian activism, by pointing out its existence.

Ha, wait, this sentence about "the left-wing mob" that viciously intimidated Proposition 8 donors is the best thing in the whole Malkin piece: "Businesses that contributed money to the Prop 8 campaign were besieged by fist-wielding protesters." Protesters besieging businesses with fists! Literally punching or maybe threatening to punch buildings!

The owners of Chick-fil-A are right-wing Southern Baptists. They will do things like donate lunches to meetings of religions anti-gay groups and put "Focus on the Family" materials in your kids' meal. If this is not widely known, it is perfectly responsible to tell people about it, so that they can make informed decisions about where they spend their money. That is actually how capitalism is supposed to work.