Prague as theme park. Plus: Cairo!

Even without the riots, there is simply so much of everything in that ancient city, where the imagery doesn't stop 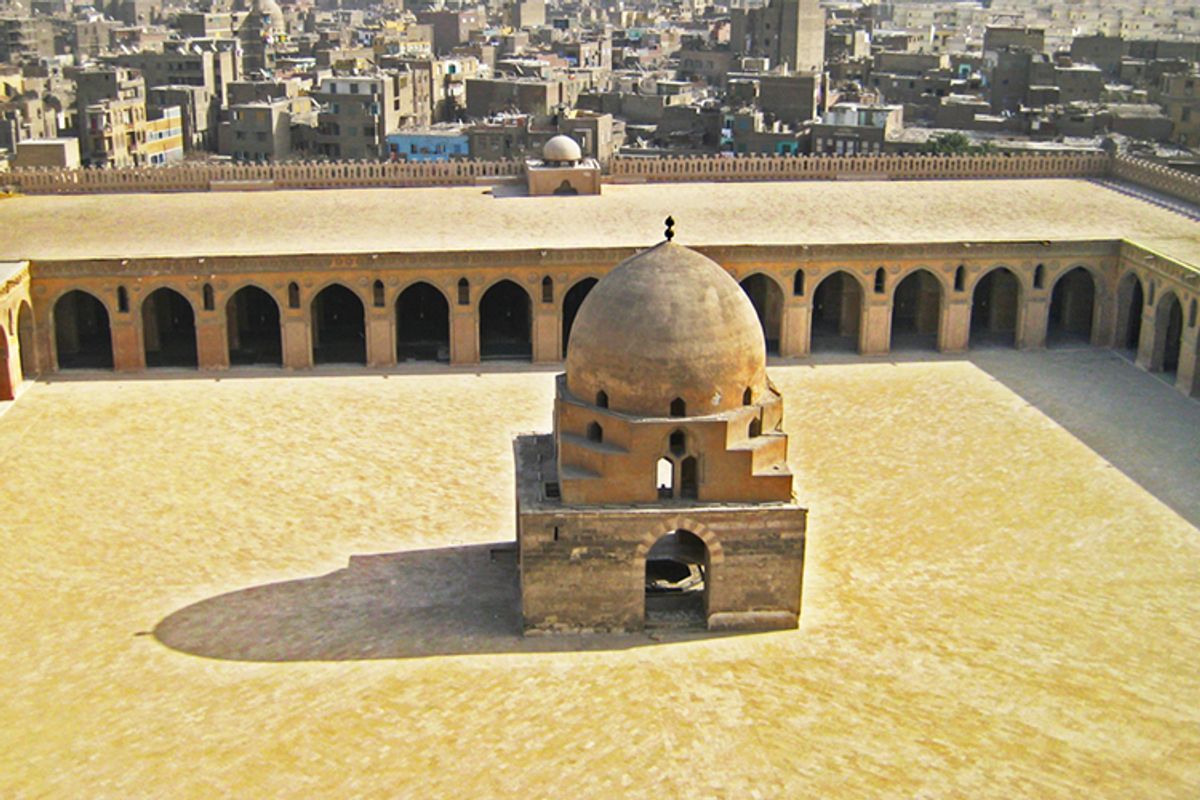 The Ibn Tulun mosque in Cairo
--

Continuing my series of travelogues from annoying places, let's move now from Southeast Asia to Europe.

Punk rock Cold War cathedral
reeks of clove smoke and black eyeliner.
Girl drops a postcard at the Old Jewish Cemetery,
Krista says to Alex: mixed drinks for a dollar, I love it, I love it!

What every would-be expatriate knows,
the price of booze and shoes in a cold gothic Disneyworld,
and lousy directions to a grey alley flat
where Vaclav Havel screwed some ballerina.

Somebody somewhere is nostalgic for the sound;
the clatter of a Russian goose-step, the diesel roar of a Nazi tank,
which at least had more heart
than the lazy scuff of cheap Doc Marten leather.

There really was a postcard from Prague written by somebody named Krista to somebody named Alex, and it really did say, "Mixed drinks for a dollar, I love it!" The card featured a picture of Prague's Old Jewish Cemetery (one of the city's most famous attractions). But that's not where I found it. I found it on the floor at the Frankfurt airport, on the way home from Budapest. I wrote that poem, you see, without ever having been to Prague. My impressions were based on things I'd heard and things I'd read.

Two years later I did visit Prague. I was taking the train from Paris all the way to Krakow, in southern Poland, in order to see the concentration camp at Auschwitz-Birkenau. The train stopped in Prague. I had 12 hours to kill there.

My poem, it turned out, was pretty much on the mark. The city was an unruly scrum of tourists and American college students. This was less than five years after the fall of the Wall, however. For the time being, anyway, the city retained a gritty, Cold War texture. It still felt exotic, far away.

Fast-forward to 2011. As I feared would be the case, Prague has completed its transition. What was once an important cultural and intellectual center with a fascinating history has become a Gothic theme park fitted out exclusively for tourists -- a huge percentage of them Americans.

The first sign of trouble was on the airplane. Our flight was totally full, and I reckon no fewer than half of the passengers, no exaggeration, were female American college students. Many were traveling in groups of 10, 15, 25 or more. The chatter was deafening.

Prague itself is one big continuation of this.

I expected a lot of people, but what I encountered was above and beyond. The thickness of the crowds will remind you of Venice or Florence -- it's elbow to elbow at times; many of the cobblestoned streets are so crowded that it's difficult to walk. What's different is the demographic. In Prague, everybody is young and everybody is American.

And nearly all of these young Americans, it seems, are girls. Where the hell are the boys? Is there some stipulation at U.S. universities decreeing that only females are allowed to do their semesters abroad in Prague? (Somewhere, I'm thinking, is a cold, sad city equally overrun by the opposite sex.)

The capital is architecturally stupendous, I'll grant it that, but eerily sanitized. It really does feel like a theme park. It's like some touristic equivalent of a city in which a neutron bomb has gone off, leaving the place uninhabitable for everybody except teenage girls in University of Michigan sweat shirts. Any real sense of history and culture has been trampled under. All that remains is the stonework and steeples.

And while maybe most college kids haven't got a surplus of disposable income, somebody in Prague is spending and spending big, if the shops are any indication. Medieval neighborhoods where people once lived and worked have become high-end malls, with row after row of exclusive boutiques hawking jewels, crystal and designer clothes.

I wonder how the Czechs feel about all of this. They still live here, and if you venture outside the historic Old Town you might actually see one.

Czech women, it should go without saying, are heartbreakingly beautiful -- slender and cherubic at once, with those wide Slavic cheekbones. Partly for this reason, and as you may or may not know, Prague has long been something of a sex tourist destination, which reminds me of something that happened to me during that 12-hour layover back in 1995.

I had been out walking all morning and was looking for a bathroom, when I stumbled into what I believed was a restaurant. It was right off the Charles Bridge, on the west side of the Vlatva, on a nondescript street that could have been anywhere.

Once inside I was greeted by a man in a tuxedo, who handed me what I took to be a menu.

"Thanks," I said. "Maybe I'll get some coffee or hot chocolate. Do you have a toilet I could use first?"

"As you wish," he said, looking at me funny.

It was in the bathroom when I began to figure things out. Hanging over the urinal was a pornographic picture in a frilly gilt frame.

I looked around for tables, but there were none. The waitresses, too, seemed a little different -- in that many of them were naked, or almost naked.

What saved me, I think, were the high-priced entrees and my empty pockets. At the time I was a first officer with American Eagle, bringing in a cool $13,000 a year, hoping to make it all the way to Poland on about 20 bucks a day.

Ah, the joys of budget travel: Eurail passes, lousy food, hostels with shared toilets at the end of some greasy hallway. But in a way, we've all become "budget travelers," because although it might be harder nowadays to make one's way across Europe on 20 bucks a day, getting there has never been cheaper. Indeed, as some might see it, the world wouldn't be turning into one big tourist circus if not for the fact that flying has become so inexpensive and accessible.

As an airline pilot, do I have blood on my hands? Following my story from the Phi Phi Islands in Thailand, one Salon reader proposed that my frustration with obnoxious backpackers was an expression of ... guilt!

Not quite, but his bigger point is one of the great conundrums of global travel: How do we encourage people to appreciate the planet's extraordinary places without simultaneously despoiling them?

Phi Phi was "discovered" by tourists fewer than 20 years ago. Before it became Cancun East, the island had almost no tourist infrastructure whatsoever. In 1989 I visited Ko Samui, a small Thai island not far from Phi Phi. To get there you took a rickety ferry from the dirty Thai town of Surat Thani after an overnight train from Bangkok (cue the Mountain Goats song "Source Decay.") Today, chartered 747s arrive on Samui nonstop from Europe. High-rise hotels dot the coastline. For a few hundred bucks, vacationers can spend a week in a Southeast Asian resort.

It's the same story all around the world. Be it Angkor Wat, Machu Picchu, Victoria Falls, Phi Phi or Prague, brace yourself for the splendor -- and the crowds.

There is no easy answer, and maybe no answer at all -- at least until the day when $200-a-barrel oil makes binge vacations prohibitively expensive.

I'll concede, however, that a place needn't be written off simply because it's touristy. Plenty of the world's great attractions are able to hold their own against the throngs. The city of Istanbul, for example (and most other spots in Turkey). Or the aforementioned Machu Picchu. It's crowded and noisy, but the setting is so extraordinary that it almost doesn't matter. You'll hardly notice all of the body jewelry and Dropkick Murphys T-shirts (six, I counted, in a single day in 2003). Get to the ruins early enough, or stay late enough, and you can have the site nearly to yourself.

And here's another one: Cairo. Apropos enough, I suppose, in light of ongoing events. As a rule I'm not much of a cities person -- I'll take the jungles, the mountains, the countryside villages -- but this is a special case.

Cairo, the de facto capital of the Islamic world, with its countless grand mosques, teeming bazaars and ancient ruins. I estimate that I have taken more pictures in Cairo than anywhere else; at every turn I'm digging out my camera. I would never call the city "picturesque" -- it's far too hectic and overwhelming for a word like that -- but it's a palette of endless texture and detail, color and commotion. Even without riots and water cannons, there is simply so much of everything. The imagery doesn't stop: the spectacular detailing of a thousand-year-old minaret; the ramshackle clutter of the souqs and storefronts; a donkey cart piled with strawberries; women in full cover walking along some back-alley road at sunset.

And lest we forget the Giza Plateau. Sure, there are tour buses everywhere, and the spectacle of Ukrainian women tottering through the sand in 6-inch heels and miniskirts. But it's the Pyramids! Sure there's a Pizza Hut only a few hundred yards from the paws of the Sphinx. But it's the Sphinx!

To be fair, Cairo is also massively overcrowded, filthy and draped in heavy smog. Traffic is unmanageable beyond words. There is little sanitation. The volume of street-side trash can be staggering; I once saw an impromptu traffic circle constructed entirely of garbage. Even the Pyramids are strewn with litter.  In summer, with temperatures poking into the triple digits, the noise and fumes become unbearable -- the sky above the city seems to condense into a superheated, tea-colored broth.

There are nearly 20 million people in greater Cairo. That sounds impossible until you're looking out at the city from the walls of the Citadel or from atop the minaret at Ibn Tulun. Suddenly it is very believable. There is Cairo in every direction -- a mammoth, horizon-wide sprawl of concrete and dust and humanity. It's so densely, suffocatingly packed as to seem almost a single continuous structure -- hundreds of thousands of buildings scorch-fused together by the sun.

What to do when it's all too much? Simple, just head for the world's greatest restaurant, the inimitable Abou Tarek. Everybody in Cairo, if not in all of Egypt, is familiar with Abou Tarek, a four-story building on a grimy street of tire and muffler shops, just off the eastern end of 6 October Bridge, a few blocks in from the Nile.

Walk in, take a seat, and within 30 seconds you're dining on the restaurant's sole entree, that most delectable of Egyptian treasures: a steaming bowl of koshary. Koshary is a mixture of noodles, lentils, chickpeas and fried onions, topped with a spicy tomato sauce and however much chili sauce you can handle. All for the equivalent of about $1.50.

The place has been there since 1950, founded and (still) owned by Youssef Zaki. Zaki is maybe Cairo's closest thing to a celebrity chef -- a sort of Colonel Sanders of Egyptian fast food, whose portrait stares down at you from the walls. On my last visit, Zaki himself was on the premises, shaking hands.

Images of Cairo, including a cameo by Mr. Zaki, can be seen in a YouTube video I shot in the spring of 2010. Click here.

Photos from Prague, Phi Phi, Egypt and elsewhere can be viewed here.