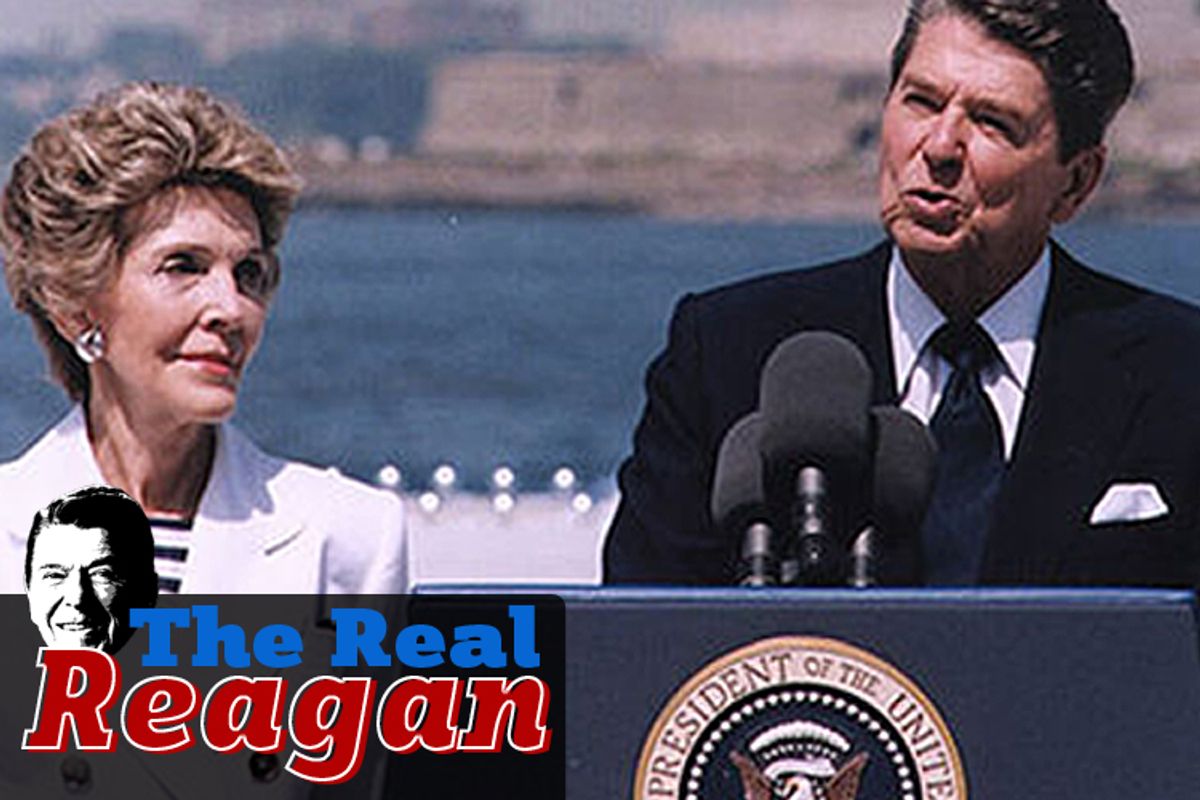 President Reagan at the Centennial of the Statue of Liberty on July 4, 1986
--

Ronald Reagan was an avuncular statesman whose unswerving faith in America's destiny indelibly changed the course of American society for the better. That's one way Reagan is remembered today, 100 years after he was born, and 22 years since his presidency ended. His optimistic streak is so ingrained in the popular mind, and so intricately associated with Reaganism, that Republican presidential hopefuls routinely invoke his spirit. Even Barack Obama's recent State of the Union address was likened to Reagan's gauzy, sanguinary rhetorical style.

Reagan the optimist is everywhere. It's become a common refrain among not only Reagan's defenders but also among a wider and less politicized audience: He revived Americans' faith in their country and, deploying his "city on a hill" rhetoric, restored patriotic pride after the twin traumas of Vietnam and Watergate. This narrative isn't entirely misplaced, of course.

Reagan was armed with speeches, dramatic backdrops, wit, good looks and an unpretentious disposition, which he used to communicate to Americans that he believed in the country's fundamental decency and its capacity to promote the cause of liberty and justice worldwide. Reagan, Lou Cannon has written, was an "unabashed sentimentalist."

Indeed, Reagan's famous 1984 tribute at Normandy to the Allied soldiers who stormed the beaches in World War II captures his sentimental side -- and his American creed. He told the assembled guests, including D-Day veterans, that they embodied American ideals of freedom and liberty: "You all knew that some things are worth dying for. One's country is worth dying for, and democracy is worth dying for, because it's the most deeply honorable form of government ever devised by man."

But the absence of doubt in so much of Reagan's repertoire -- the Manichaean streak he routinely displayed -- applied to other, darker aspects of his rhetorical legacy. Perhaps Reagan "delivered America from fear and loathing," as historian John Patrick Diggins once said. But it's also fair to point out that he sometimes adopted a raw, vitriolic approach to politics, and his capacity for tapping people's anger should be remembered as an aspect of his legacy, too.

He skillfully channeled the surging 1960s-to-1980s-era national antipathy toward liberal reformers, the welfare state and student protesters, among other demons. He had an uncanny, almost instinctual feel for the electorate's mood. Throughout his three decades in political life, he repeatedly seized on people's hopes, but also found their anger and played on their fears. In Reagan's lexicon, optimism competed with anger.

For instance, while he spoke of unleashing Californians' individual initiative during his first 1966 gubernatorial campaign, he also tapped voters' fears that the social order was beginning to crumble and that liberals and their allies had caused the crumbling. He campaigned by charging that "a small minority of beatniks, radicals and filthy speech advocates" had "brought shame" to the University of California at Berkeley, an elite, publicly funded school in the state's higher education system. Describing California's city streets as "jungle paths after dark" and college campuses as hotbeds of sexual licentiousness and immoral behavior, Reagan rode to power by depicting California as an overly liberal, permissive society. He vowed to crack down as one of his first priorities in the governor's mansion. Appropriately, he had a sign in his capitol office that said: "Obey the rules, or get out."

Nor was Reagan above using the hot-button social issue of race to further his political agenda by tacking rightward. At one news conference during his campaign for the 1968 Republican presidential nomination, Reagan refused to criticize Alabama Gov. George Wallace, who had become a leading symbol of segregation and white Southern resistance to the civil rights revolution of the mid-1960s.

As president, Reagan mocked "welfare queens," implying that African-American women on public assistance habitually cheated taxpayers out of their hard-earned money. President Reagan also defended segregation academies such as Bob Jones University (where interracial dating wasn't allowed), and, most infamously, praised the cause of "states' rights" in a 1980 campaign address in Philadelphia, Miss., where three civil rights workers had been slain 16 years earlier.

Enemies lurked in Reagan's often heated rhetoric about international threats to the United States. These enemies helped him to bolster his strong anti-communist credentials. While challenging incumbent Gerald Ford for the 1976 nomination, Reagan accused the president and other moderates of failing to defend America over the disputed Panama Canal. Reagan thundered on the stump that "[W]e built it, we paid for it, it's ours and ... we are going to keep it." His rhetoric in that campaign, said historian Sean Wilentz, was "a throwback to the early 1950s, when Republicans attacked the Truman administration by caricaturing its 'striped pants' diplomats as effete, un-American, and soft on communism, and accusing these diplomats of having stabbed the country in the back."

Reagan's 1983 "evil empire" address is well-known, but it came in the context of decades of shrill broadsides against communist forces supposedly threatening to overrun the free world. Calling the Soviet Union "the focus of evil in the modern world" in that speech, President Reagan walked a fine line. He decried the Soviet system while also sometimes issuing more temperate calls for nuclear disarmament and arms control agreements between the two superpowers.

Another theme favored by Reagan -- one that reigns in contemporary politics -- is that the source of impending disaster within the United States was attributable to the growth of big government. A bloated, out-of-control Washington establishment bore the brunt of Reagan's attacks. Washington wasn't a city of public service, according to his worldview; it was home to legions of inept bureaucrats, corrupt government officials, and a leviathan central government bent on enlarging its own authority at the expense of state sovereignty and individual rights. The federal government squelched entrepreneurial energy, and undercut the guiding spirit of America -- freedom.

If there was truth to his broadsides, there was also a hyperbolic quality. Just as Reagan buoyed a nation beset by two decades of internal strife, he also deepened the coarse nature of American politics. Far from hovering above the fray, he was very much enmeshed in the most contentious debates of his times, and any historical assessment of his legacy during this commemorative week should take into account his darker rhetoric and angrier public persona -- and how they benefited him politically.

Matthew Dallek, an associate academic director at the University of California Washington Center, is the author of "The Right Moment: Ronald Reagan’s First Victory and the Decisive Turning Point in American Politics"