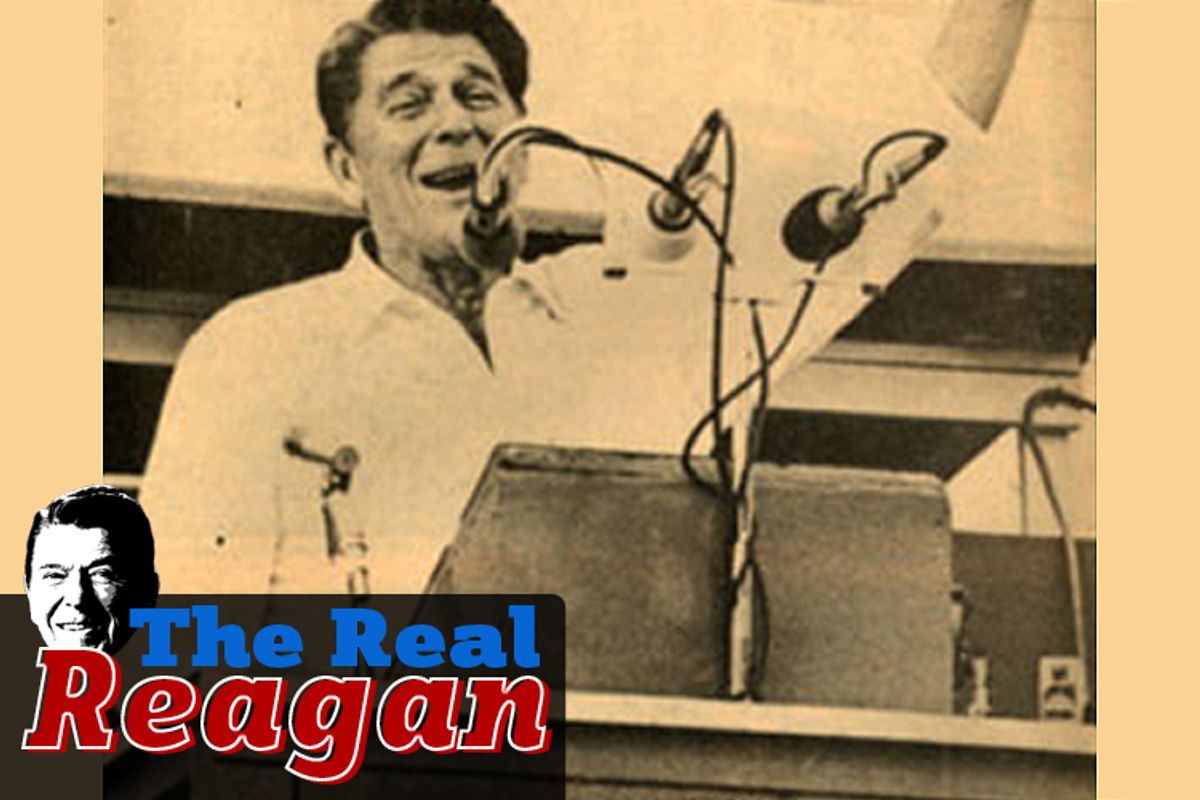 Candidate Ronald Reagan speaks at the Neshoba County Fair in Mississippi in 1980.
--

Democrats thought they had solved their Southern problem in 1976, when a peanut farmer-turned-Georgia governor named Jimmy Carter swept through the old Confederacy, winning every state except Virginia en route to a narrow electoral college victory over President Gerald Ford. For the first time in 12 years, the Democrats had won a national election -- and Dixie was the reason why.

This resurgence, though, was little more than a mirage -- a brief interruption in the South's steady march away from the Democratic Party, which in many ways culminated in Carter's defeat four years later at the hands of Ronald Reagan.

The story of why Reagan was in position to run against Carter in 1980 -- and how he managed to turn Carter's prideful home region against its native son -- really begins in 1964, when regional tensions within the Democratic Party finally reached a breaking point. Since Reconstruction, when white Southerners developed a bitter hostility to Reconstruction and its northern Republican liberal architects, Dixie had been the most staunchly Democratic region in the country -- so loyal that FDR actually won over 95 percent of the vote in several Southern states. For decades, the South elected Democrats at every level of the ballot; practically speaking, there was no two-party system in the region.

But as blacks migrated away from Jim Crow and into northern cities, Democratic leaders outside of the South came to see the enactment of civil rights laws as a political imperative. The Republican Party, then the default home of anti-segregation northern liberals, was well-positioned to win the loyalty of the blacks who moved North (where they were suddenly eligible to vote). Thus, the alliance between Northern machine Democrats and Southern conservatives frayed -- until finally Lyndon Johnson put his pen to the Civil Rights Act of 1964.

The reaction from Southern Democrats was uniformly hostile. '64 was an election year, but Richard Russell, Herman Talmadge, Russell Long, among more than a dozen other Southern senators and governors, boycotted the party's national convention in Atlantic City. And many of the Southerners who did show up came looking for trouble. 43 of the 53 members of the Alabama delegation, for instance, refused to pledge their support for the national ticket of Johnson and Hubert Humphrey and were denied seating. And most of the all-white Mississippi delegation walked out when convention organizers demanded that a rival delegation -- the Mississippi Freedom Democrats, a group of civil rights activists who argued that the state's official delegation failed to reflect the diversity of the party -- be seated with them as "honored guests," and that two of the Freedom Democrats serve as at-large delegates. Infuriated by this "humiliation" and "embarrassment," an up-and-coming Mississippi Democrat named Charles Pickering -- who decades later would become the center of a national controversy because of his racial history -- left the party on the spot, joined the GOP and became one of the godfathers of modern Mississippi Republican politics.

None of this caused Johnson too much worry in '64. The nation had rallied around him after John F. Kennedy's assassination the year before and, anyway, civil rights was a popular cause outside the South. That his Republican opponent, Arizona Sen. Barry Goldwater, had actually joined Southern Democrats in their futile filibuster of the Civil Rights Act only made Johnson that much more of a shoo-in. He was elected in a thunderous landslide, racking up more than 60 percent of the popular vote. But the landslide wasn't universal: In the South, Goldwater broke through and won five states -- the best showing in the region for a GOP candidate since Reconstruction. In Mississippi -- where FDR had won nearly 100 percent of the vote just 28 years earlier -- Goldwater claimed a staggering 87 percent. Civil rights had finally come to a head in 1964, and the two parties had made their choice.

The highlight of Goldwater's campaign, to the extent there was one, probably came at the end of October, when the candidate's biggest celebrity supporter -- an actor and one-time Democrat named Ronald Reagan -- delivered a nationally televised address on his behalf. As well-received as it was, the speech did little to help the doomed Goldwater. But the conservative true believers who had had embraced Goldwater and helped him topple the GOP's liberal Rockefeller establishment took note: Reagan was just as conservative as Goldwater, but far more marketable. The television age was dawning, and he was tailor-made for it.

Two years later, amidst a voter backlash against Johnson and his Great Society, Reagan handily defeated Pat Brown to become California's governor. With the 1968 Republican nomination wide open, he was immediately touted as a contender, with Goldwater conservatives begging with him to run. Well into '68, though, Reagan remained ambivalent, a posture that ended up costing him. By the time he threw his hat into the ring, Richard Nixon had already made serious inroads with the Goldwater crowd -- particularly in the South, where Senator Strom Thurmond, one of the first segregationist Democrats to flip to the GOP, served as his chief supporter. Reagan made a play, but Nixon held him off, then went on to defeat Hubert Humphrey in the fall.

It was under Nixon that the "Southern Strategy" was born. The idea was simple: Millions of white Southern voters who had been raised to vote straight Democratic tickets were feeling more and more alienated from the national Democratic Party. They were up for grabs -- Goldwater had proven it. But Goldwater had also gone too far: His explicit rejection of the Civil Rights Act played well in Dixie, but made him a monster to the rest of the country. The trick, then, was to wink and nod at white Southerners with signals that were simultaneously nebulous and unmistakable. Instead of arguing against civil rights, Nixon talked about "law and order" and, later, busing. In the fall of '68 his task was complicated by the presence of Wallace, who ran a baldly racist third party campaign and won five Southern states. But Nixon managed to peel off Virginia, North Carolina, Tennessee and South Carolina. He ended up with 301 electoral votes, but without those 43 from the South, he would have fallen short of the magic 270 mark.

As president, Nixon continued to court Southerners aggressively. Slowly, Republican candidates began winning races for the U.S. House and Senate in Southern states. Nixon swept the region in his 1972 reelection campaign -- although he swept the rest of the country too, winning 49 states over George McGovern. It was against this backdrop that Democrats were so elated by Carter's victory in 1976. Given the chance to vote for one of its own, the South had returned to the Democratic fold. Maybe Dixie could be saved after all.

But the Republican Carter had beaten, Gerald Ford, in many ways represented the Republican Party Southerners had rejected before Goldwater came along. A moderate Michigan congressman who was appointed vice president by Nixon in 1973, Ford had little natural kinship with Dixie, and he lacked Nixon's cunning in exploiting the region's racial sensitivities. In the '76 GOP primaries, Ford was challenged by Reagan. In the early-going, with most of the primary and caucus action in the North, Ford ran up six straight victories over Reagan. With his campaign on the ropes, Reagan then prevailed in North Carolina -- thanks to a huge assist from Jesse Helms, another former segregationist Democrat-turned-Republican. Reagan was a far better fit for Dixie than Ford, and his Carolina triumph set off a wave of late primary wins. The delegate race was virtually tied by the convention, though Reagan ended up falling just short.

As soon as Ford lost to Carter, Reagan became the overwhelming favorite for the 1980 GOP nomination. The man Goldwater conservatives had first sized up as presidential timber 16 years before was finally in position to lead the party. After an early hiccup in Iowa, Reagan crushed his main primary competitor, George H.W. Bush and sealed the nomination. Unemployment, inflation and interest rates were all high, and American confidence was sagging, thanks mainly to the economy, but also the the protracted hostage crisis in Iran. After accepting the GOP nomination in mid-July in Detroit, Reagan found himself running more than 20 points ahead of Carter (who had still not officially fended off Ted Kennedy's intraparty challenge). It was at that point that Reagan, his voice hoarse from an infection, took a few weeks off for a working vacation.

At the end of July, Reagan's campaign announced that he would resume campaigning on August 3. The first event on his calendar seemed innocuous enough: a county fair in rural south-central Mississippi. But the Neshoba County and its annual fair enjoyed a racially fraught history. 16 years earlier, at the height of "Freedom Summer," three civil rights workers from the North -- Andrew Goodman, James Chaney, and Michael Schwerner -- had been abducted and murdered by the Klan in Philadelphia, Miss., Neshoba's county seat. Local and state politicians, like many local residents, had reacted by playing dumb "Maybe they went to Cuba," Mississippi's governor, Paul Johnson, said when news first broke that the trio had gone missing. The Neshoba fair had been around since the late 19th Century, and it had become a popular campaign stop for segregationist candidates in Mississippi -- the notorious Ross Barnett was a regular. But no presidential candidate had ever before showed up. Until Ronald Reagan.

Reagan and his campaign sensed political opportunity, both in Mississippi and across the South. The state had voted for Carter in '76, but only by two points. Reagan's Mississippi state chairman, a young congressman named Trent Lott, was adamant that it could be flipped. So it was that a cheery Reagan took the stage that August afternoon and issued one of the most thinly veiled appeals to racial resentment in modern American politics. ""I believe in states' rights," he told the uniformly white crowd of 30,000 Mississippians, "and I believe in people doing as much as they can for themselves at the community level and at the private level." Technically, he was talking about welfare policy, his aim in using the term "states' rights" -- the rallying cry for every politician who'd fought civil rights legislation in the 1950s and 1960s -- was unmistakable. The crowd responded with delirious cheers.

That fall, Reagan carried Mississippi -- and every other state in the South, except Carter's native Georgia. The Neshoba moment did not, by itself, bring this outcome about (although his margins in Mississippi and other southern states were exceedingly narrow). Nor did the South, by itself, account for Reagan's victory over Carter. (It was, after all, a 44-state landslide.) But the 1980 election established that the South's break with the Democratic Party wouldn't be a short-term phenomenon. And if there's one moment that captured the spirit that animated this realignment, it was Reagan's proud invocation of "states' rights" -- and his audience's gleeful response. It was the fulfillment of the Southern Strategy.