OK, so they're technically not my mom's dumplings. But I wish she were here 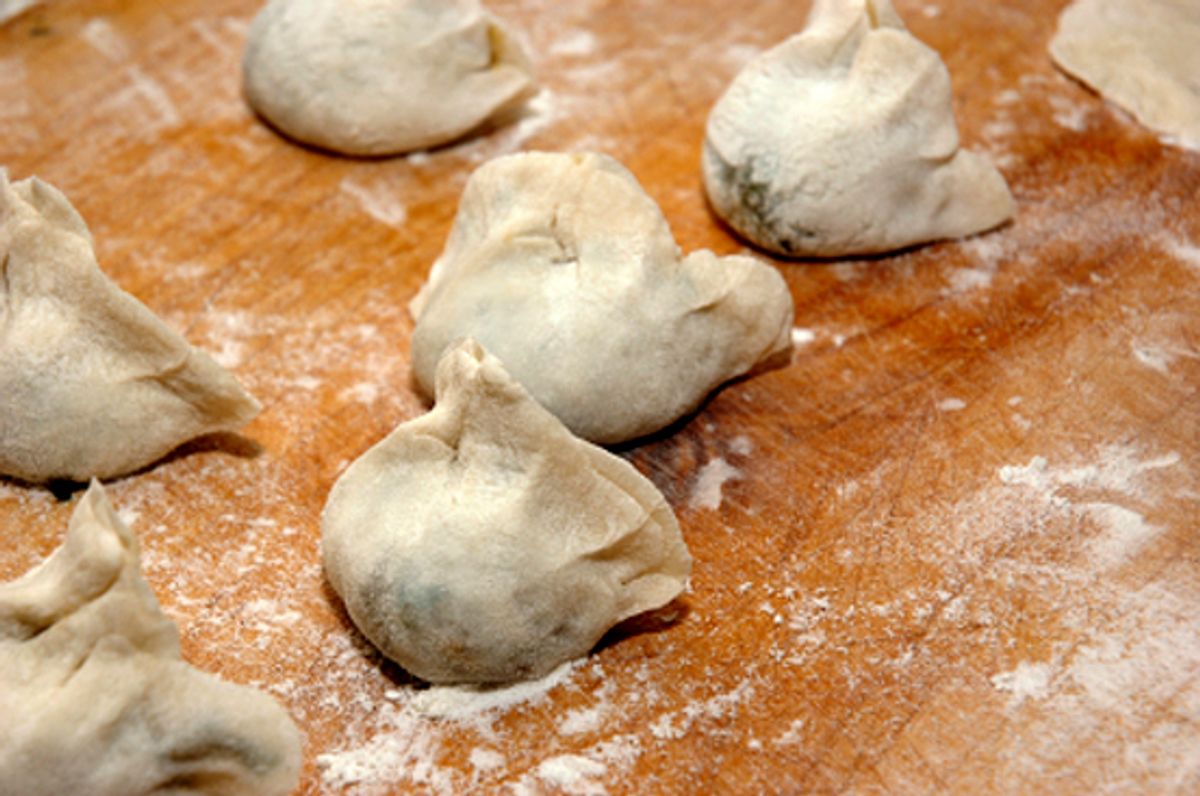 "My mom is the best cook in the world" is one of those sentences that is inherently not to be trusted, like "there is no kitten cuter than my kitten" and "our Bobby is the most talented artist in his class." But my friend Winnie does not play when it comes to her mother's cooking, and especially when it comes to her pot-sticker dumplings. And to prove it, while her mom was in town last week, Winnie invited some friends over for dinner. Twenty of them.

I arrived early, to catch a dumpling-making lesson (which I'll share with you tomorrow), but it wasn't long before I saw what was really going on: a full-scale onslaught of weapons-grade motherly overdoing-it-ness, Asian Momma style. Winnie's mom, Mei, had filled not one but two entire grocery carts with food, and piles of vegetables were lying all around the kitchen, as if houseplants. I saw dried noodles soaking in water, ready for cooking. I saw racks of ribs marinating. I saw a school of fish waiting to be fried. I saw a massive pot that had become the final resting place for two whole ducks. I saw a mound of ground meat roughly the size of a beach ball.

And somewhere in the middle of this Chinese cornucopia, I saw a woman no bigger than the average American middle-schooler racing around from fridge to sink to stove. I shook Mei's hand, fighting off the instinct to call her "Aunty." Winnie said hi, her voice barely audible, vanishing from a terrible cold.

Within moments, Mei was showing me how to mix the filling for her dumplings, a process that involved sticking my hands forearm-deep into raw meat, constant worry that the kiddie-pool-size mixing bowl we had was still not big enough, and getting a man stronger than I to squeeze the water out of napa cabbage. (The recipe, as written, calls for "1 assistant, 5'9", 200 pounds, athletic build.")

Old friends of Winnie's started to stream in, happy to see Mama Yang after years of leaving their homeland of St. Louis. And because conversations of the past tend to extend in that direction, I asked Mei how she learned to cook in the first place.

"I didn't learn at home," she said. She's the second youngest of eight, and in her Taiwanese home, the oldest of her sisters took care of the kids-helping-in-the-kitchen department. But when she moved to America in the '70s, to Utah, of all places, the sudden vanishing of all the flavors she grew up with inspired in her a sort of culinary awakening. By memory and osmosis and a group of chatty friends, she taught herself how to cook, inventing techniques when there were none she could recall, and in the process coming up with a dumpling recipe made so often she does it all by feel and sight.

Once, a neighbor asked if she could come watch her cook, to learn about this food. But it wasn't long while watching Mei painstakingly roll out dumpling skins, filling and pleating and pinching each one shut, before the neighbor came through with some good old American ingenuity: "Mei, this is so dumb! Why don't you just do it like a pie, like we do? Have all the filling and just put the dough on top!"

Mei huffed as she told this story, now two, maybe three decades old. "Hmph. This is three thousand years of history. That's the beauty." Then she added, "No machine can do this."

"No, just the manual labor of children," Winnie cracked softly, though it was hard to tell if the volume was because of her cold or if she was saying it so that her mom couldn't hear. I giggled, now rolling out skins, only a dozen in and already feeling soreness in the pads of my fingers.

Winnie's father, whose quiet shuffling about made me miss my own dad, came to the table to help with the skins. It was a watershed moment; in the lifetime that Mei's been making these, he'd never before been seen commandeering a rolling pin. His grasp slipped, knocking over a glass of water, and Mei summoned her best Tiger Mother: "Next time, practice. At home!" I think she was joking, but it was the kind of joke that carried with it some weight. He smiled and carried on, in that adorable Papa kind of way.

Now six or seven helpers deep, Mei let the dumpling operation go and started cracking at the stove. Soon food began piling up, spreading over two tables. Ribs came out of the oven, ducks laid on a bed of stir-fried greens, noodles squiggled into an enormous pan. Fish began their swim in hot oil, and it was soon clear that it takes about a quarter of this much food to feed 20.

Then Mei started in on the dumplings, frying them crisp on the bottoms before steaming them soft and tender up top. All told, we had made almost 250 dumplings, and nearly everyone was already full by the time the first batch of them emerged from Mei's kitchen. Still, the gobbling masses stormed the table. They were lovely, gingery and tender, deeply browned and satisfying.

At the edge of the kitchen, I saw Winnie on her couch, looking sick and exhausted. I caught her peering at the piles of food populating her apartment like guests themselves. She offered and then began pleading for people to take home leftovers. Someone opened her freezer door to help store the uncooked dumplings, then cracked, "Well, there's no room in the freezer. Hell, there's no air left in the freezer."

And then I saw in Winnie's eyes something familiar, the particular kind of feeling overwhelmed that can only come from your parents. The kind of overwhelming that happens when they only get a handful of chances a year to show you that they love you, and that they show you that they love you by doing things for you and feeding you, and that they do so with such intent, unsmiling force that it's physically exhausting to receive it. (And to pack away the leftovers.) It's overwhelming on its own, but then you feel like an ingrate that you feel this way, and that leads to Parental Overwhelming Version Two, which is an altogether more complicated mess of love and fear and exasperation and feeling like a kid again even though you're an adult and wishing they will just leave you alone but hoping that you will never, ever have to see them go away.

But maybe I was just projecting.

Maybe I was thinking of my own mom and the rolls of paper towels she tries to cram into my tiny apartment and the weeks' worth of leftovers whenever she gets to cook for me and the freezer that's still full of the food she bought for me when she came to take care of me after an operation two years ago.

And maybe I was thinking of my own dad, and the one time I ever saw him fill a dumpling in our kitchen, which he did with an unexpected grace and speed. He told me, as I picked up a spoon to help him, that he learned to do this when he was young, when he worked in a Chinese restaurant in between classes to pay for college. And about to go off to college myself, I realized that there was so much about him that I didn't know, even as we sat there silently tucking meat into wrappers.

And maybe I was especially thinking of these things today, the Chinese New Year, and of all the pesky instruction my mother used to give me: Clean your room before you go to bed, so you don't sweep out the good luck in the new year! Eat candy to start the year sweet! Wear your new red clothes!

Today I woke up 1,500 miles from my parents. I ate candy and wore my dad's old red sweater and rued that my apartment is a mess. And I missed Mom and Dad terribly.