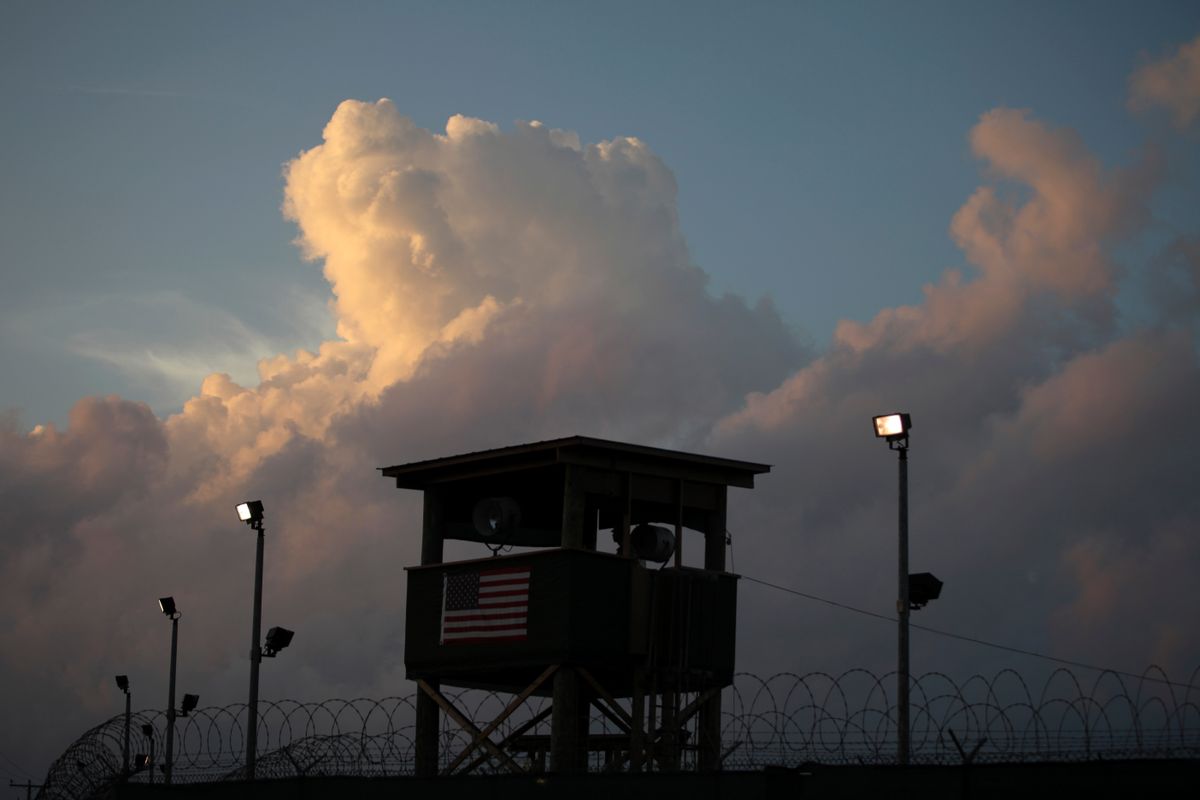 A guard looks out from a tower in front of the detention facility on Guantanamo Bay U.S. Naval Base in Cuba. (Associated Press)
--

A 48-year-old Afghan citizen and Guantanamo detainee, Awal Gul, died on Tuesday of an apparent heart attack.  Gul, a father of 18 children, had been kept in a cage by the U.S. for more than 9 years -- since late 2001 when he was abducted in Afghanistan -- without ever having been charged with a crime.  While the U.S. claims he was a Taliban commander, Gul has long insisted that he quit the Taliban a year before the 9/11 attack because, as his lawyer put it, "he was disgusted by the Taliban's growing penchant for corruption and abuse."  His death means those conflicting claims will never be resolved; said his lawyer: "it is shame that the government will finally fly him home not in handcuffs and a hood, but in a casket."  This episode illustrates that the U.S. Government's detention policy -- still -- amounts to imposing life sentences on people without bothering to prove they did anything wrong.

This episode also demonstrates the absurdity of those who claim that President Obama has been oh-so-eagerly trying to close Guantanamo only to be thwarted by a recalcitrant Congress.  The Obama administration has sought to "close" the camp only in the most meaningless sense of that word:  by moving its defining injustice -- indefinite, due-process-free detention -- a few thousand miles north onto U.S. soil.  But the crux of the Guantanamo travesty -- indefinite detention -- is something the Obama administration has long planned to preserve, and that has nothing to do with what Congress has or has not done.  Indeed, Gul was one of the 50 detainees designated by Obama for that repressive measure.  Thus, had Gul survived, the Obama administration would have sought to keep him imprisoned indefinitely without any pretense of charging him with a crime -- neither in a military commission nor a real court.  Instead, they would have simply continued the Bush/Cheney policy of imprisoning him indefinitely without any charges.

There's one other aspect of this episode that warrants attention.  In its 2008 Boumediene decision, the Supreme Court struck down the provision of the Military Commissions Act which denied habeas corpus review to all detainees, and ruled that Guantanamo detainees at least have the right to a one-time review by a federal court as to whether there is credible evidence to justify their detention (a far less rigorous standard than the one that applies if they're charged with a crime and the state has to prove their guilt beyond a reasonable doubt).  Gul had filed a habeas petition and it was fully argued before a federal court back in March -- 11 months ago.  The federal judge never got around to issuing a ruling.

This happens quite frequently in our court system:  judges simply fail to act within anything resembling a reasonable period of time.  Gul was imprisoned for 8 years without a shred of due process (outside of internal Bush Pentagon "administrative reviews") and finally had his Constitutional right to obtain habeas review affirmed by the Supreme Court in 2008.  His habeas petition was fully submitted and orally argued almost a full year ago, yet even in the face of his prolonged, due-process-free imprisonment, the federal judge presiding over the case just never bothered to rule on his claims.  There's a well-known legal maxim that "justice delayed is justice denied," but this goes well beyond merely violating that.  Taking almost a full year -- at least -- to decide a habeas petition for someone who is languishing in indefinite detention for their ninth year is simply inexcusable.

Gul's death -- and what turned out to be his due-process-free life sentence -- is an important reminder of the heinous detention policies of the U.S.: not as a matter of the Bush/Cheney past, but very much the current U.S. posture as well.  The only difference is that there is no more partisan gain to be squeezed from the controversy, so it has blissfully disappeared into the harmonious dead zone of bipartisan consensus.

All of this finds a nice symbolic parallel in the Obama administration's apparent efforts to install Omar Suleiman as interim Egyptian leader; Suleiman is not only steadfastly pro-American and pro-Israeli, but was long the U.S.'s point man for renditions and the severe torture which  accompanied it.   This is what is meant when we hear repeatedly about what a stalwart "ally" the Mubarak government been in the "War on Terror":  they've dutifully detained and brutalized anyone we wanted.