The anatomy of today's meme -- and a couple of Twitter tips for Mr. Cole 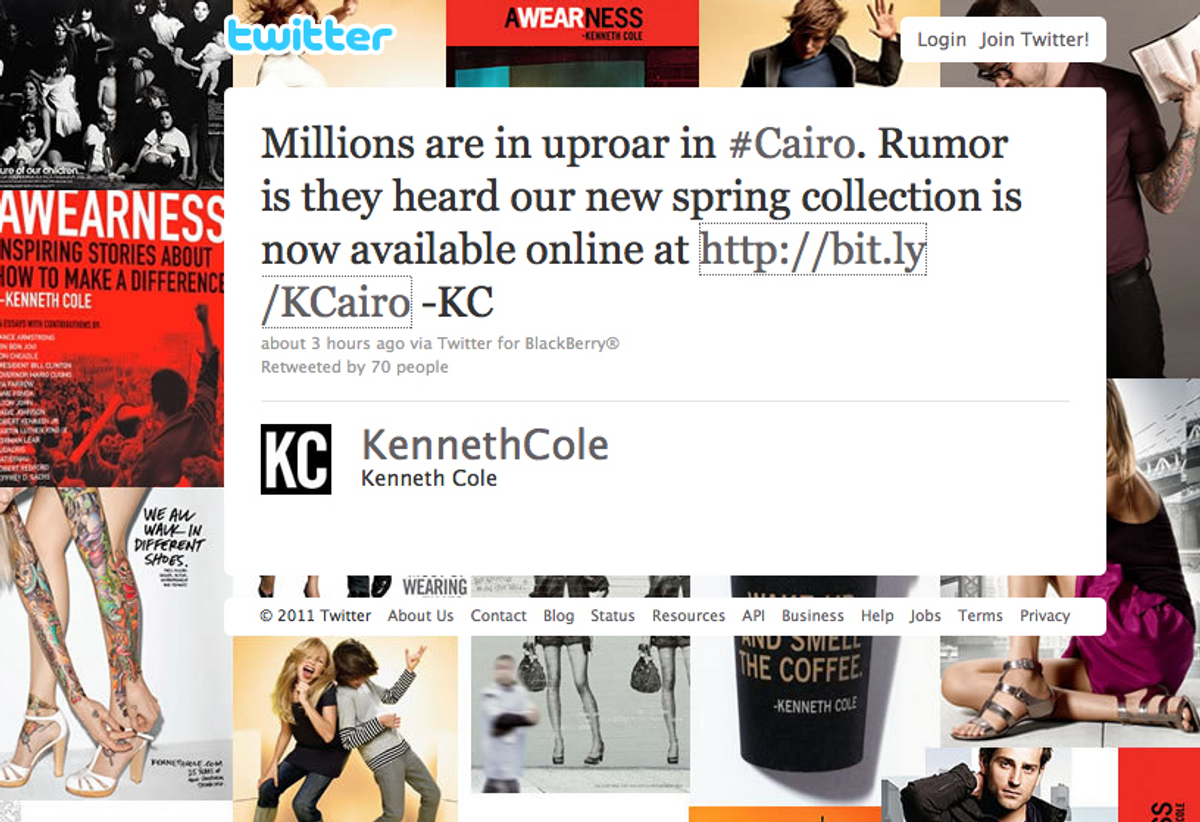 Twitter has a couple of unspoken rules. You won't find them anywhere in Twitter's user support section.  You probably won't learn about them by reading one of those "10 ways to win awesome followers" blog posts. You really just have to fail, apologize and try not to do it again.

Kenneth Cole did just that today with this tweet:

Unspoken rule No. 1: Don't make jokes about tragedies. You've done this sort of thing before -- mixing up bad puns and profundity. It's oh-so-tempting to try to make light of grim situations, sad stories and global traumas. Don't try to make it funny. That's what comedians are for. Kenneth Cole is a fashion designer known for sharp-looking dress shoes, not sharp wit.

Unspoken rule No. 2: Don't make marketing gimmicks out of tragedies. This is just like rule No. 1 but more directed at Kenneth Cole. When the world's attention is fixated on one event, sometimes it's not the best idea to jump up and down with the "Look at me!" routine. The unrest in Egypt isn't the Super Bowl. It's a troubling story with historical implications. Nobody wants to hear about your spring slacks.

As Twitter is wont to do, a spoof account emerged immediately. Using the handle @KennethColePR, an anonymous tweeter -- probably a comedian -- put Kenneth Cole's insensitivity into perspective. Here are the highlights. After the rest of the Internet exploded over the tweet, Kenneth Cole himself offered an apology on Facebook:

I apologize to everyone who was offended by my insensitive tweet about the situation in Egypt. I've dedicated my life to raising awareness about serious social issues, and in hindsight my attempt at humor regarding a nation liberating themselves against oppression was poorly timed and absolutely inappropriate.