He often dreamed of the world coming together to battle spacemen, but never gave much thought to an actual killer 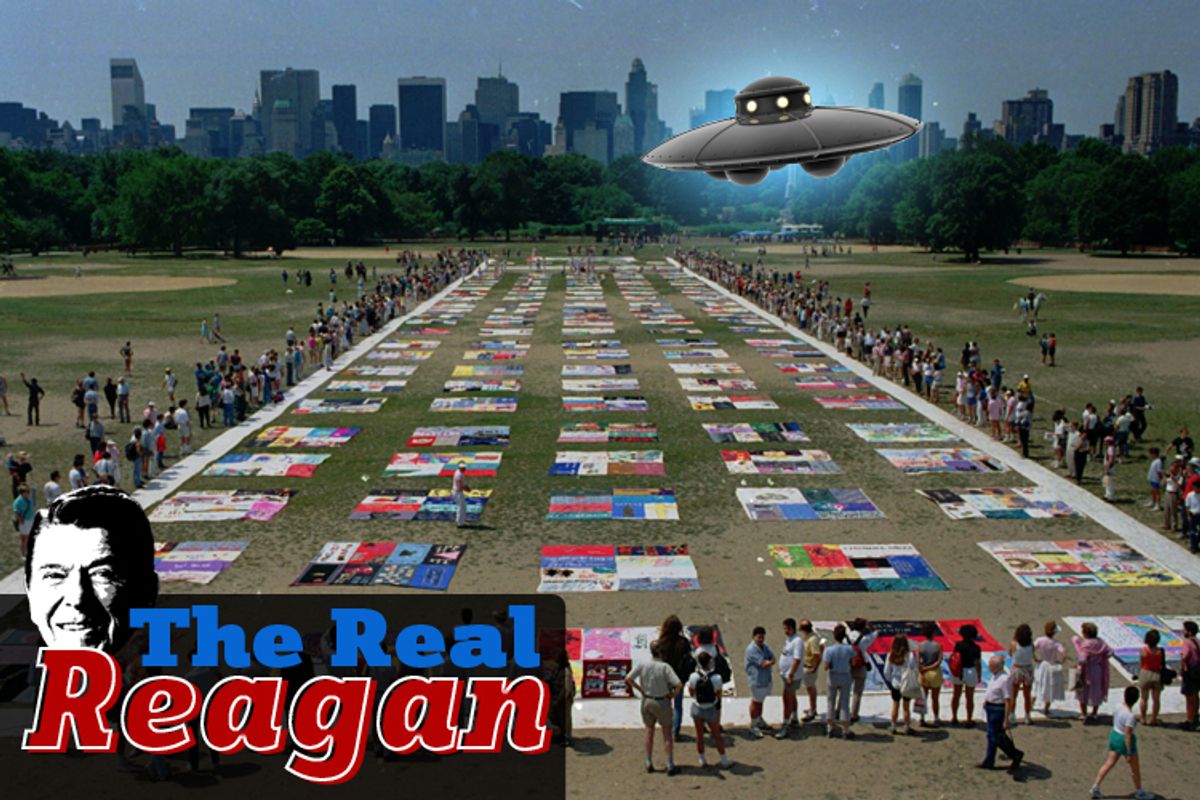 Onlookers watch as almost 1,500 quilt panels bearing the names of New York area residents who have died of AIDS are unfolded on the Great Lawn in New York's Central Park Saturday, June 25, 1988.
--

Ronald Reagan claimed to have seen UFOs on at least two occasions, according to reports from sources as disparate as the Wall Street Journal, Lucille Ball and the National Enquirer. He alerted the Navy to one of his sightings, and he and Nancy believed that Egyptian hieroglyphics referenced extraterrestrial flying crafts.

In 1985, at the first summit meeting between Reagan and Mikhail Gorbachev, Reagan surprised the Soviet premier with this odd line of questioning:

"From the fireside house, President Reagan suddenly said to me, 'What would you do if the United States were suddenly attacked by someone from outer space? Would you help us?'

"So that's interesting," Gorbachev said to much laughter.

That hypothetical space invaders scenario -- a sort of "this island Earth" fantasy that sounds profound to either the screenwriter of a 1950s B picture or a very high college freshman -- was so compelling to Reagan that he repeated it in public speeches, on multiple occasions, while president.

Reagan talked about this alien threat all the time, to the apparent consternation of his staff. When his 1987 U.N. assembly speech didn't include the alien story, he wrote, "and toward the end perhaps I still would like my 'fantasy' -- how quickly our differences world wide would vanish if creatures from another planet should threaten this world."

If Ronald Reagan was a genuine UFO nutter or simply in thrall to a simplistic sci-fi plot makes no difference to me. But the fact remains that he spent a lot of time talking about spacemen. Spacemen killed, according to my estimates, no Americans, at all, during Reagan's presidency.

Reagan never mentioned AIDS until he was directly questioned about it in his second term, and he never gave a public statement on the epidemic until 1987, when 20,000-30,000 people had already died from it. When it came up in press briefings, it was, at first, a subject of humorous cajoling. Later, the president was advised not to say that children couldn't catch AIDS from casual contact. Members of the Reagan inner circle attacked Surgeon General C. Everett Koop for encouraging sex education and condom use. The Centers for Disease Control was underfunded and there was never a comprehensive plan for dealing with the epidemic.

The president mentions in a 1985 diary entry, in passing, that Rock Hudson was rumored to have AIDS -- and the topic doesn't come up again for two years. (And for some reason, late in his term, he begins consistently misspelling it, as "Aides.") There isn't much evidence that he devoted much time at all to even thinking about AIDS, which was killing a frankly staggering number of Americans throughout his entire presidency. Edmund Morris recalls him wondering if "the Lord brought down this plague [because] illicit sex is against the Ten Commandments," which does not sound like the statement of a man who's given the disease much thought.

Whether he himself was an anti-gay bigot who thought that the disease was a punishment from an angry god or simply a callous old man (surrounded by Christian right ideologues) who didn't concern himself with what was killing so many homosexuals hardly matters. People died either way, because the government didn't make fighting the epidemic a priority.

Maybe, instead of imagining or wishing for an extraterrestrial threat that could've united mankind in an all-out militaristic space battle to save the future, the Great Communicator could've spared some of that SDI money to battle an actual, existent threat, with a similar disregard for borders or nations.