How I learned to stop worrying and love football

Growing up, I defined myself by hating sports. Then I fell for a superfan -- and the game that inspires him 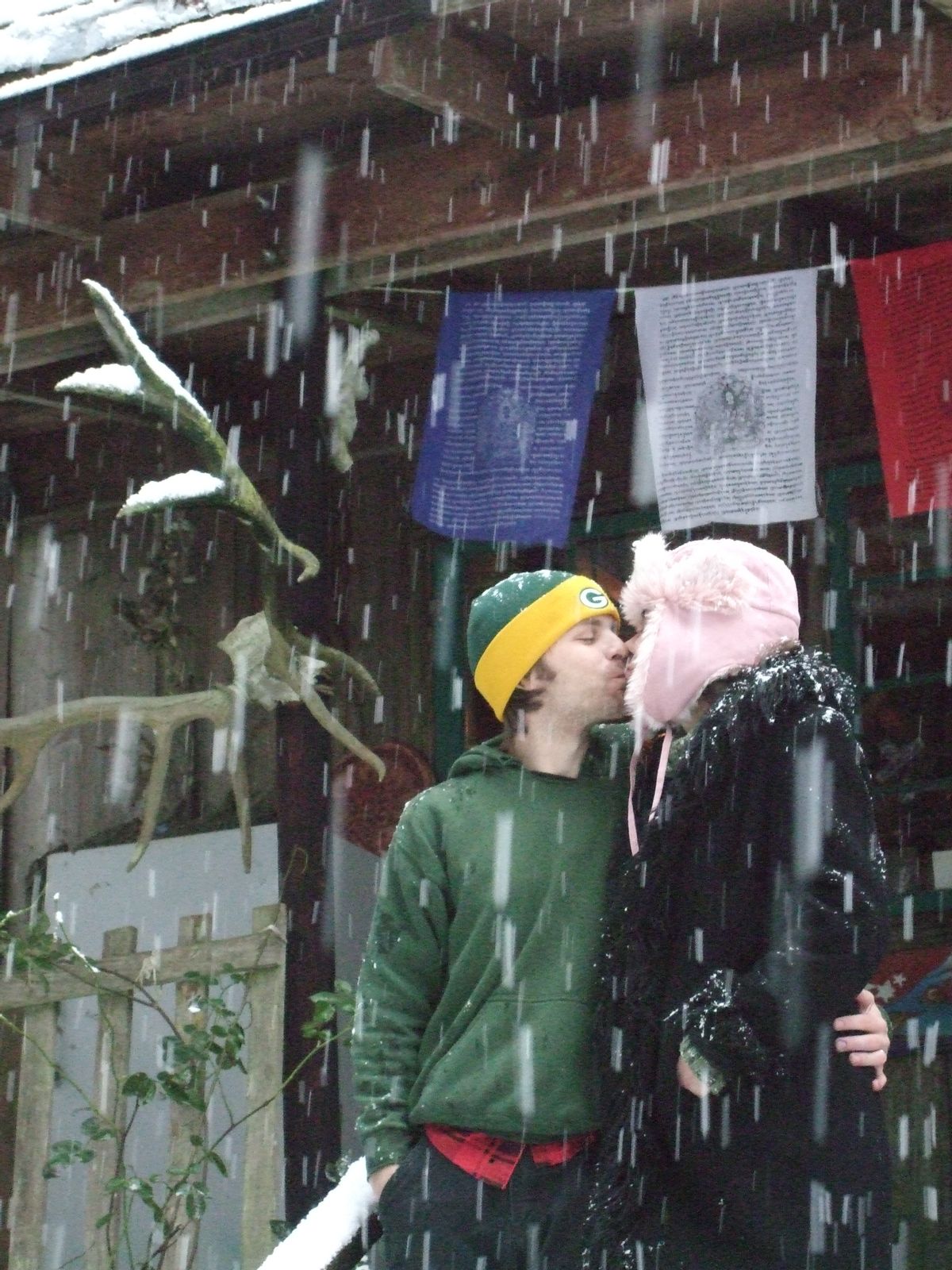 The author and her husband, Rich.
--

Rich likes to tell me about football. When we first got married, a picture of Brett Favre hung in his office. I learned about Favre's battle with alcohol and Vicodin, his propensity for throwing interceptions, and his improvisational gusto, exemplified by his stumbling underhanded pass to tight end Donald Lee for a first down in the snowbound 2007 NFC division game against the Seattle Seahawks.

After a while (about 15 seconds) my eyes would glaze over, and I'd find myself thinking about Thursday's dinner plans or perhaps Alexander Hamilton. "You're not listening to me, again," Rich would say, sounding wounded. And then my inevitable reply: "You're talking about football!"

My family never cared much for sports. My dad was a nerd, and my mom was a beatnik. They raised me to believe that football and baseball were the province of Neanderthal types who didn't know the difference between Carl Jung and Carlos Castaneda. I don't think I can blame my parents for my complete athletic incompetence, but the game was never on at our house and maybe I missed some crucial early indoctrination that allows the average American to understand the parameters of an inning or the meaning of "second down."

I attended school in a small redneck town in Oregon called Mapleton, where sports were the ticket to popularity. My social status suffered: The mere mention of football or softball awakened a paralyzing dread in me. PE was akin to the Roman Coliseum: I was dumped onto a field and someone was chasing me and I had no idea what the rules were and people were watching me. My fearful lack of coordination was so obvious that even my parents became concerned and gave me a softball for my birthday one year. "How about we play catch?" my dad said awkwardly, looking at the ball like it was a severed head. We didn't get too far.

Eventually my incompetence hardened into an intense dislike for playing sports, watching sports or even hearing about sports. In school, I kept this distaste to myself; I didn't want to be a complete pariah. I pretended to know what people were talking about when they brought up the Seahawks, and I engaged in sports-related activities that required minimal contact with the ball, such as being the scorekeeper for our middle school volleyball team.

Freshman year, I played 2nd clarinet in the pep band, which meant I had to go to every home football game. I didn't mind that much. The games, with their bonfires and hot cider, had a certain appeal. I understood ritual, after all: Majestic in their blue and white jerseys, our boys tore across the frosted fields like fleeting gods; my cousin made out under the bleachers; and on the homecoming bonfire, we roasted effigies of our opponents. I felt a certain awe, but I still had no idea what was going on.

Sophomore year I moved to a bigger town and attended South Eugene High School, home of the Axemen. South was a large school, and there were hundreds of students who never seemed to know whether our team had won or lost. For the first time in my life, I didn't have to pretend to be interested in sports. It was liberating. My extracurricular activities were writing bad poetry and imitating Winona Ryder, and people still liked me. It was actually cool to hate football. From that point on, I ignored sports completely.

Sadly, I was not destined to live out the rest of my years in the contemplation of poetry. In my 20s I accidentally dated an Atlanta Falcons fan. And while I didn't exactly develop a magical love for football, four years with Josh taught me what the majority of Americans know instinctively: Watching sports, particularly football, is a good excuse to sit around with friends, drinking beer and eating nachos. (The key word being beer.) As soon as the TV clicked off and the bottles of Rainier disappeared, my focus vanished: I hadn't escaped from Mapleton only to revert to pretending to care about football just because some guy I liked was a fan. Josh would try to tell me about the Falcons, and I'd roll my eyes: "I'm sorry, but I don't get it. It doesn't matter how many times you try to explain it to me. I hate sports. It's, like, genetic."

Those four years in no way prepared me for the harsh reality of dating and then marrying a Green Bay Packers fan. When I first met Rich, I told my friend Becky: "I can't believe it, it's like we have everything in common. He loves the Rolling Stones, and presidential history and vans. He even knows how to play John Prine songs on the guitar."

You think you know someone. Then you discover that he squanders 80 percent of his available brain power thinking about Brett Favre.

Rich's love for Brett Favre was real, and almost touching. When he talked about Favre, his eyes would sparkle and exuberance would infect his diction, his normal quiet mutter giving way to a braying crescendo. It drove me crazy, and it began to cause a serious rift in our relationship: I stopped listening when he opened his mouth.

"You're talking about football," I'd say.

And my weak reply: "Well I thought you might be going to talk about football."

Football wasn't our only problem. A few months after we got married, Rich got laid off from his job and my major contract dried up. Finances were tight, and garden-variety misfortune eclipsed our happiness: Our beloved cat got hit by a car, my grandmother died, our aged Honda broke down, Rich's mom and grandmother suffered from serious health problems, we kept getting closer to broke. Though I never expected him to take care of me, Rich felt an old-fashioned pressure to be the breadwinner, and when things were going bad, he didn't see it as our problem, so much as his. When he could get work he would take it, but those jobs always seemed to mean lower pay for longer hours and a long commute. He was stretched to the breaking point, constantly worried and frequently terse. Except when he talked about the Green Bay Packers.

Rich sounded happy when he talked about the Packers. Even when he was bemoaning the dark saga that culminated in Favre signing with the Minnesota Vikings, he had that light in his eyes. I began to notice that his monologues about the Packers could be tightly crafted and inspired. As a lit major and linguistic stickler, he latched onto the theme of Favre as a tragic hero, in the classical sense of the word. "A lot of people misuse the word tragic, which technically implies someone undone by hubris. Like Hamlet, Favre is a perfect example," he'd say seriously.

And it wasn't just Favre: I was treated to the inspiring life stories of wide receiver Donald Driver (grew up in a U-Haul!) and (former) Packers cornerback Al Harris (recovered from a ruptured spleen in record time and returned to finish the season!). And I soaked in the mythology of Green Bay: the legacy of Vince Lombardi, and the Packers' unique status as the only NFL team that's owned by its town, not by a rich guy or a corporation.

I started listening to Rich when he talked about football, because it was a lifeline between who he had become and who he used to be. And the more I actually listened, the more I actually understood. Rich's love for the Packers made me realize that football was more than just a bunch of jocks bashing into each other to demonstrate their unfathomable understanding of an elaborate and mysterious code of rules. Though Rich's interpretation of the game and players might be a touch more academic than most, he mirrors millions of other Americans. Football fandom is a source of comfort, common ground where one can meet with friends and rivals alike, an equalizing arena where your opinion is just as valid as the next guy's, economics or expertise be damned. Simply watching the game gives you the right to believe, wholeheartedly and without reservation, that your team deserves to win.

I noticed football fandom gives Rich something to talk about with huge segments of the population, something he actually finds interesting. I began imagining what it would be like to live in a world where half the population had an avid and serious interest in American presidential history. I'd never be bored at a party again.

Philosophical revelations aside, I also began to get some understanding of the mechanics of the game: "So wait, the team has four chances to advance the ball 10 yards? And they're heading toward the opponents' end zone?" Light dawned in my eyes this time.

It sounds stupid, but things got better for us from there. We were still broke, but Rich seemed to spend fewer hours staring into the abyss. It was as though by listening I was affirming some part of him that was safe from the cold realities of survival.

Today, of course, we are an Aaron Rodgers house. (Never, ever get Rich started on Packers fans who defected when Favre left the team.) Over coffee in the morning, I can expect to be enlightened on Rodgers' latest quarterback ranking. Rich also periodically interrupts my work to remind me of small facial expressions and gestures that indicate that Rodgers is a stand-up guy.

"I'm glad we like Rodgers," I found myself saying one day. "I mean it would be terrible if the Packers had replaced Favre with someone with a bad personality, like Roethlisberger." I stopped in my tracks. Would it be terrible? Really? Did I actually have an opinion about this? Did I care?

I thought about it. Yep. The suspicion that I cared about a football team was confirmed when I learned that the Packers had beaten the Falcons and thus advanced to the NFC Championship Game. "I can't believe they did it!" I exclaimed to my friend Mizu, who looked confused, probably remembering a dour poetry-writing teenager of yesteryear.

I still don't really understand football. Some obscure rule pops just at the moment I think I've grasped a play. (The stereotype of the dumb football player amazes me. No one who could remember all this crap could possibly be dumb.) Compared with your average zealous Green Bay Packers fan (and yes, the average Packers fan is zealous), I'm an ignorant dilettante. But I'm learning. I'm sure there are a million Steelers fans who have also had a rough year and who also deserve happiness, but I won't be thinking about them on Sunday. As an American football fan it's my prerogative to believe in the worthiness of the Green Bay Packers and Packers fans everywhere. One in particular.