Republicans propose to cut spending by 9 percent, which would lead to government worker layoffs 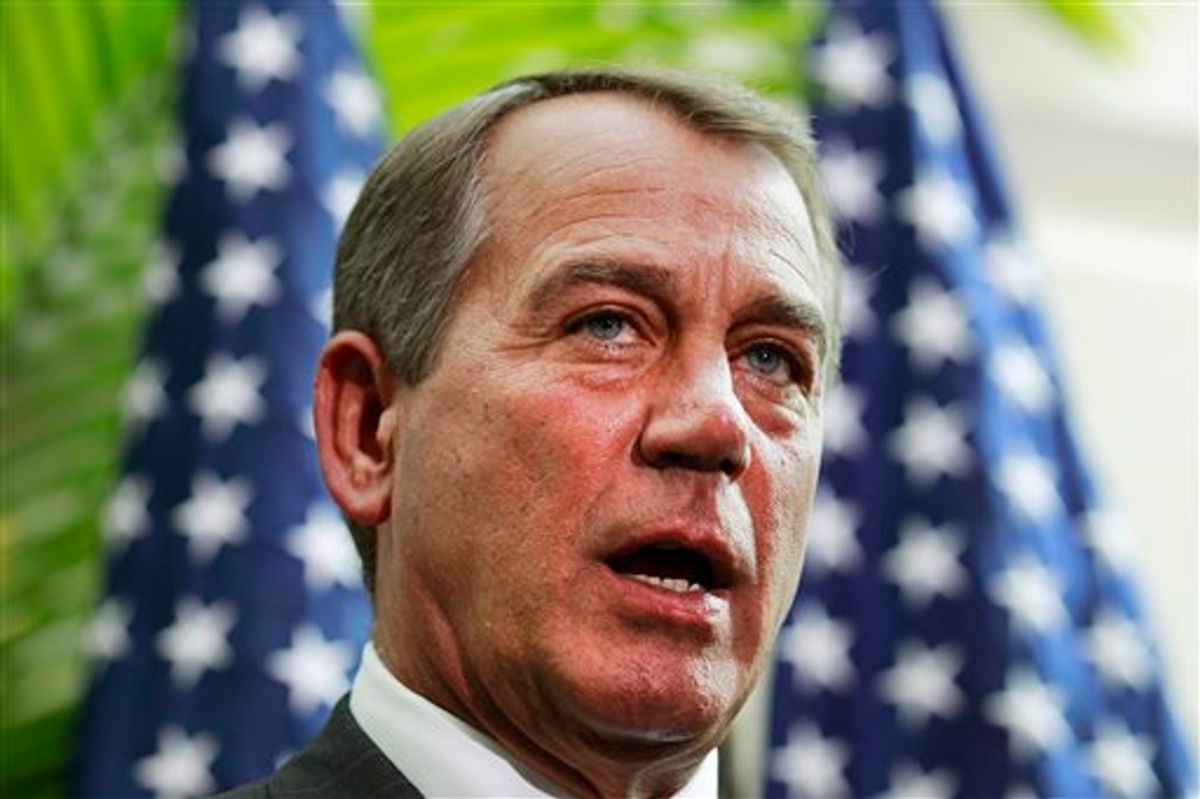 In this photo taken Jan. 19, 2011, House Speaker John Boehner of Ohio talks about the upcoming vote to to repeal the health care bill at a news conference on Capitol Hill in Washington. Republicans used their first two weeks in power, interrupted by tributes to the Arizona shooting victims, to excoriate the health law. Boehner says the next big priority is to codify a perennially renewed ban on federal funding for abortion, and to specify that it applies to health plans. (AP Photo/Alex Brandon) (AP)
--

Even as they take a cleaver to many domestic agencies, Republicans now running the House are barely touching Congress' generous own budget.

A new GOP proposal would reduce domestic agencies' spending by 9 percent on average through September, when the current budget year ends.

If that plan becomes law, it could lead to layoffs of tens of thousands of federal employees, big cuts to heating and housing subsidies for the poor, reduced grants to schools and law enforcement agencies, and a major hit to the Internal Revenue Service's budget.

Congress, on the other hand, would get nicked by only 2 percent, or $94 million.

Recent hefty increases to the congressional budget -- engineered by Democrats when they held power in the House from 2007-2010 -- would remain largely in place under a plan announced Thursday by the chairman of the House Appropriations Committee, Rep. Harold Rogers, R-Ky.

The plan, developed in close consultation with Republican Speaker John Boehner's office, would cut Congress' budget less than any other domestic spending bill, except for the one covering the Department of Homeland Security.

All 12 spending bills left unfinished by Democrats will go into a single, enormous measure that Republicans promise to bring up the week of Feb. 14.

"Charity begins at home, and Congress should lead the way with cuts to their own budget," said Steve Ellis of Taxpayers for Common Sense, a Washington-based watchdog group. "Instead they're protecting their bottom line while slashing everyone else's."

The cut to Congress gets a little deeper, to 3.5 percent, if it were imposed for a full calendar year instead of the seven months that will remain in the current budget year. But so, too, would the cuts to other agencies -- growing to 16 percent.

When Democrats took over Congress in 2007, they inherited a $3.8 billion budget for Congress. That includes money for members' and leadership offices, House and Senate committees, and support agencies such as the Capitol Police and the Congressional Budget Office, which crunches numbers for lawmakers as they consider legislation.

Since then, that budget has risen to $4.7 billion, a 23 percent increase over four years. The biggest jump, 11 percent, occurred when President Barack Obama signed a Democratic-written spending bill just after he took office in 2009.

Among the first items of business when the GOP regained the House was to pass a bipartisan measure to cut office and committee budgets by 5 percent. That move that prompted much self-congratulation even though it would produce just $35 million in savings. For context, the deficit is climbing toward $1.5 trillion this year.

Republicans bristle at the suggestion that Congress is getting off easy. They promise further cuts when the Senate pitches in and when the two chambers work out joint items such as budgets for the Capitol Police, Library of Congress and the Government Accountability Office.

"Earlier this year, the House passed unprecedented cuts to its own budget, and we are cutting more ... a total of nearly $100 million in House-related spending cuts," said Boehner's spokesman, Michael Steel. "The Senate has substantial responsibility for the overall legislative branch appropriations bill, and we hope to work with them to cut even more going forward."

Republicans will provide more details about the spending bill in the week ahead.

When Democrats gained a majority in 2007, the budget for the office of the speaker's office -- considered the most powerful of any in Congress -- exploded. As speaker, Rep. Nancy Pelosi, D-Calif., engineered a $2 million, 71 percent increase immediately after that transfer of party control.

A Pelosi spokesman attributed some of the increase to her decision to consolidate a variety of leadership jobs within her office -- as opposed to the power-sharing approach of her predecessor, Republican Dennis Hastert of Illinois.

Regardless, Boehner inherited a pretty flush office account, which permits him a sizable staff contingent, including a press and communications operation with a dozen people. Capitol Hill news coverage has increased considerably in recent years with the advent of the 24-hour news cycle, the growth of niche publications and a range of new online media, including Twitter and Facebook.