Football will face a labor dispute, despite its wild success 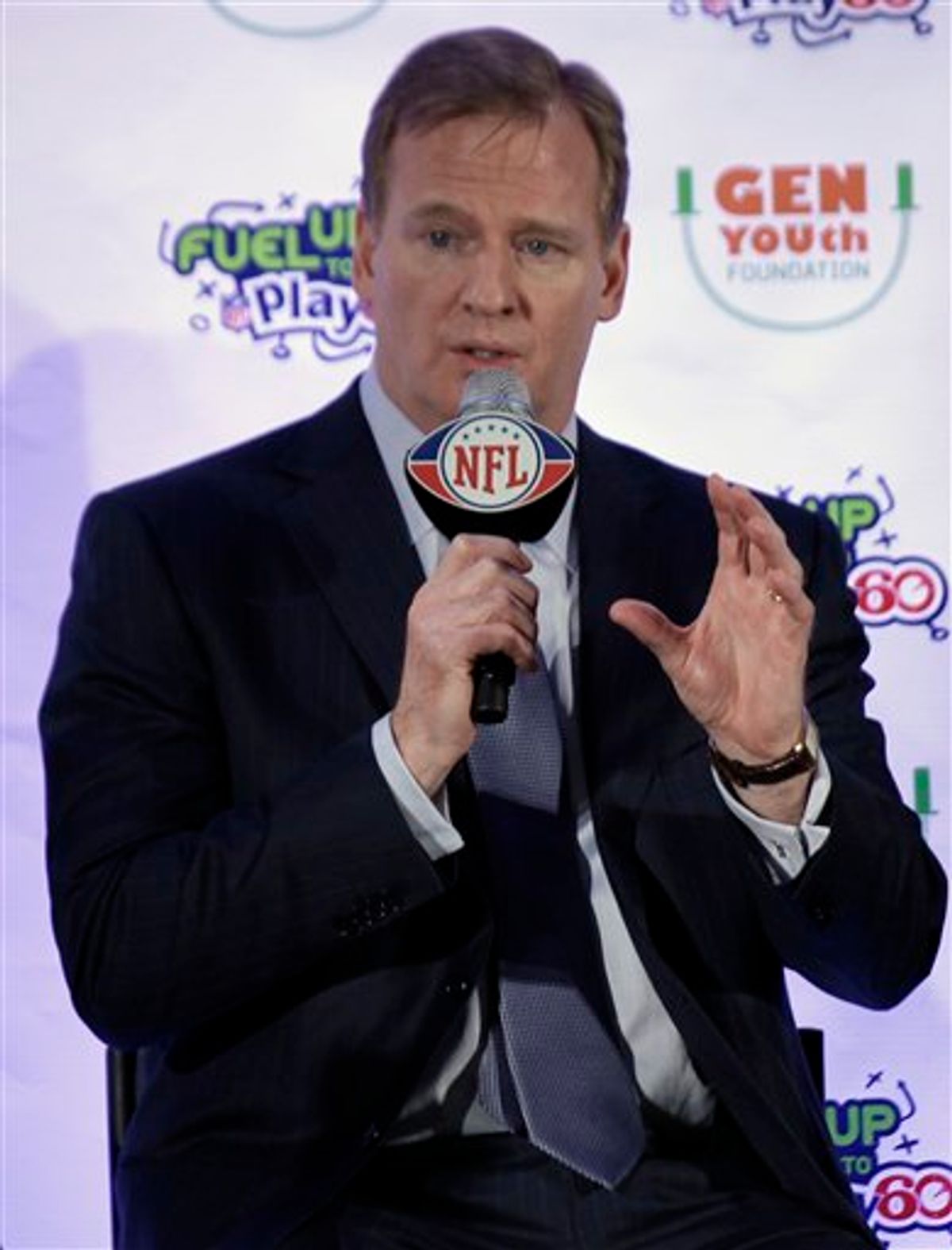 It's made for TV. It's packed with personalities, sex appeal and wall-to-wall violence. It's the National Football League.

By far, football is America's favorite sport. Yet despite that, when they turn out the lights after Sunday's Super Bowl between the Green Bay Packers and Pittsburgh Steelers, the party could be over.

A labor war that pits rich athletes against richer owners could shut down the game for who knows how long.

The collective bargaining agreement that led to unprecedented success for the NFL expires at the end of the day on March 3, and barring an agreement before then, owners are threatening to lock out players.

They are pondering the unthinkable: The first play stoppage since 1987. The shutdown of the only form of entertainment that, as the sky-high TV ratings this year have shown, consistently brings people together in a tweeting, texting, TiVo-ing country where viewing habits get more fragmented by the day.

"For a sport at the height of its popularity to self-destruct by lacking the will and creativity to solve economic problems would be the height of folly," agent Leigh Steinberg said. "Who wants to be the person to kill this golden goose?"

To hear the two sides tell it, they're trying to make it better, not kill it. But they are far apart on how to get that done.

Owners say it's time to pocket more money for a league that hasn't started a stadium project in more than five years. They want a bigger slice of the roughly $9 billion in revenue, a rookie wage scale and to increase the regular season by two games to 18.

The players think those two extra games will cause an exponential rise in injuries and don't want to give back any percentage of the revenue pool, a massive slice of which comes from the networks, which combine to pay around $4 billion a year to televise the NFL.

In the kind of theater that only the NFL could provide, Cincinnati receiver Chad Ochocinco stood up among the journalists at Commissioner Roger Goodell's annual news conference Friday to ask the question on every football fan's mind.

"Do you know how far away we are from getting a deal realistically done?" Ochocinco said.

Goodell said both sides are preparing for any outcome, but "the commitment on behalf of ownership is to get an agreement."

He reiterated that Sunday in an interview on Fox, saying a negotiating session between the owners and players the day before was "beneficial."

"My focus is on the next three or four weeks," Goodell said. "I've often said, our agreement expires on March 4th. We have to use that period of time to reach an agreement that's fair for the players, fair for the clubs, and allows our great game to grow for our fans."

Not doing so could stop the show after one of the most riveting seasons anyone can remember.

It began with the eminently watchable TV program, "Hard Knocks," that documented the New York Jets and their foul-mouthed coach, Rex Ryan, as they made their way through training camp.

It continued with a contentious debate about player safety, a result of the NFL's early season decision to ramp up enforcement of rules that restrict helmet-to-helmet hits and other "illegal" tackles on defenseless receivers coming over the middle.

"If you want to get (hard hitting) totally out of the game, put flags on us. We'll tag off and pull flags off each other," Steelers linebacker James Harrison said during Super Bowl week, "and we'll see how popular the game is then, and how many people come to watch it."

Much as the NFL tries to rein it in, the violence is certainly an attractive component to some fans. But it's more than that.

In 2010, there were scandals (the Broncos were caught videotaping an opponent's practice), soap operas and sad endings (See, anything related to Brett Favre).

There were feuds (Ryan vs. the Patriots), flare-ups (a brawl between Andre Johnson and Cortland Finnegan) and firings (Broncos, 49ers, Cowboys and Vikings).

There were great performances (Michael Vick and Tom Brady) and great endings (Philly beating the Giants on DeSean Jackson's last-play punt return for a touchdown) and, now, a Super Bowl that pits two of the great franchises in NFL history.

"When you look at this matchup," Goodell said, "and you say Pittsburgh Steelers and Green Bay Packers -- that's football."

Then there was Ben Roethlisberger, the Steelers quarterback, who began the season on the sideline with a four-game suspension, the outgrowth of a college student's accusations that he sexually assaulted her in Georgia last March. He was never prosecuted over what was the second such set of allegations against him, but Goodell penalized him for violating the league's personal conduct policy.

Roethlisberger is one win away from becoming only the fifth quarterback to win at least three Super Bowls, and his stated mission to put the suspension behind him has been the biggest story of this Super Bowl week.

More than 100 million were expected to watch Sunday's game on Fox, a number that figures to flirt with records because of a) the surge in popularity this year, b) the national appeal of the teams and c) the bad weather that has gripped huge swaths of the country this week.

Ratings for regular-season games this year were the best in more than 20 years. After going down last season in the rough economy, ad rates for the Super Bowl rose again -- to a maximum of $3 million for a 30-second spot.

As for Dallas, it's been a rough week in the Super Bowl city, where back-to-back snowstorms wreaked havoc and led to six injuries from ice that fell from Cowboys Stadium. Flights into Big D were canceled, traffic was snarled and some of the pregame parties were scrapped.

And we may not have seen the last of Super Bowl/Snow Bowl. The big game's travel agenda takes it to cities where the weather isn't guaranteed -- Indianapolis and New York have two of the next three title games. But the league isn't changing its plans and the show will go on.

The game was set for Cowboys Stadium, a $1.2 billion shrine to football, built by Cowboys owner Jerry Jones -- a stadium with a 60-yard-wide high-def TV hanging from the roof that perfectly reflects the success and excess that pro football has wrought.

And yet, there's no getting away from the labor strife that looms.

"Given the success of the game, given the money available, it doesn't make sense to me that a compromise solution can't be found," said the NFL's outside labor lawyer, Bob Batterman.

The takeaway message: They simply want their football.