I was a doctor accustomed to death, but not his 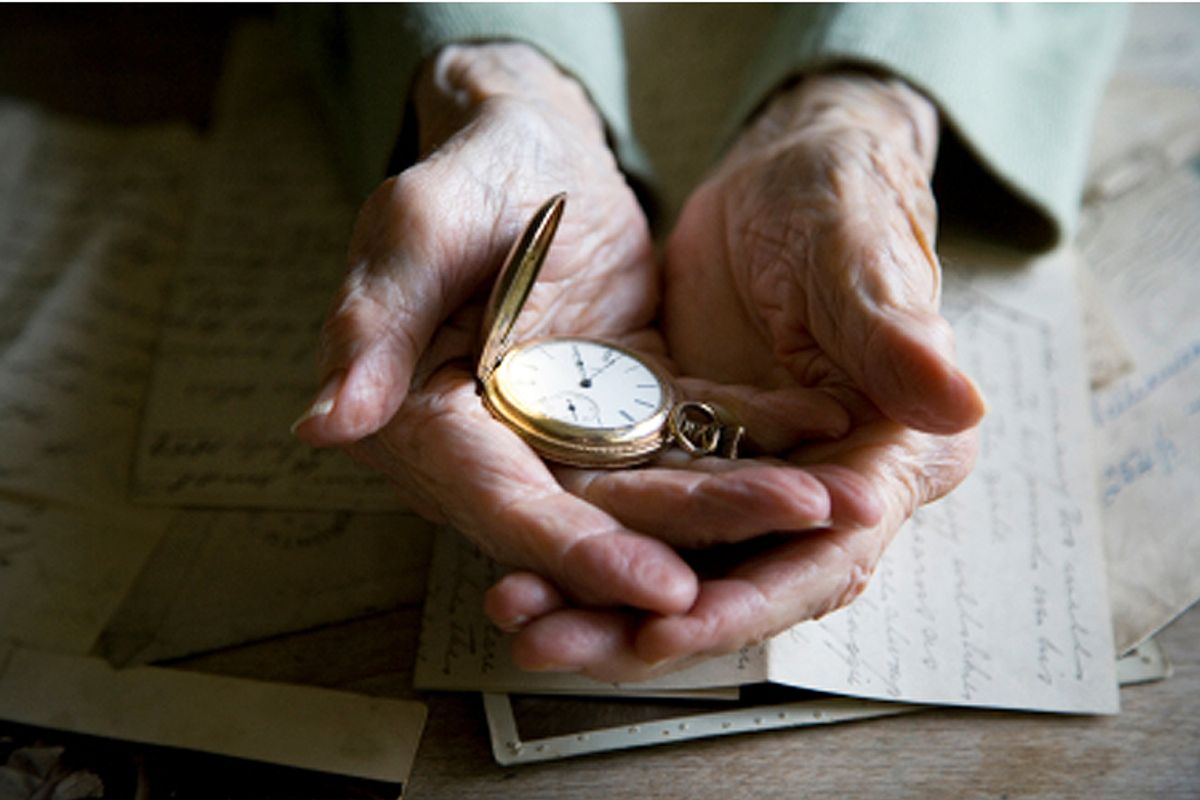 I currently live and work in Miami as a doctor for old people -- the very profession so derided in my early years of training. To be more specific, I am the psychiatrist at the Miami Jewish Health Systems, the site of one of the largest nursing homes in the United States. Although people sometimes call my place of work "God's waiting room," they miss a much bigger picture.

True, the average age of my patients is about 90 years old, meaning that I see a lot of people close to 100. The 80-year-olds who come to see me are like teenagers on my scale of things, and the 70-year-olds -- babies! And true, my job is to tend to all of the maladies and infirmities of aging that I learned about in my medical and psychiatric training. But as I have learned from countless older individuals, the true scales of aging are not one-sided; the problems of aging must be weighed against the promises. In my work as a geriatric psychiatrist I have learned that aging equals vitality, wisdom, creativity, spirit, and, ultimately, hope. And for an increasing number of aged individuals, these vital forces are growing by the day.

In the spring of 1997 my beloved grandfather passed away. A week before his death, I stood vigil at his bedside while he flickered between confusion and insensibility. The once-brilliant mind of this retired doctor was soaked in a pool of morphine, and most rational thinking had already drowned. He insisted on wearing a large pair of sunglasses in the darkened room. He cursed and growled when I held his arms as he staggered into the bathroom.

I am not certain that he even recognized me on that final visit, as by then his lifelong persona had largely separated from the person. Nevertheless, his voice came to me as I watched him lying in bed, breathing slowly: "Notice the abnormal rate and pitch of the breath sounds," I imagined him saying; "they are quiet at first but become increasingly labored until they stop for a moment -- called apnea -- and then the pattern repeats. This is known as Cheyne-Stokes respiration, and it is often seen just prior to death." I pictured the seriousness of my grandfather's face as he taught me to observe the ebb and flow of the respirations and then quizzed me to make certain that I had absorbed the lesson. The distinctive cadence of his voice alternated between curt instructions and impatient pauses, waiting for my answer. He had a way of repetitively flipping his outstretched hand at the wrist as he spoke, one finger extending out like Michelangelo's God, as if to say, "It can be this way, or that, but you must choose one!"

The practice of medicine was his life, and he had taught me with both an earnestness and a severity about caring for patients. My grandfather had experienced the urgency of his work while serving as a field surgeon in the U.S. Army Air Corps stationed on Okinawa during World War II. This sensibility was reinforced after the war in his fifty years as a general practitioner in the small industrial town of Kaukauna, Wisconsin. In both circumstances the survival of a patient depended on his own wit and hands; there were few colleagues or other resources to help out.

My grandfather had an instinctive sense of independence, no doubt fashioned in his childhood. He was born in 1914 and grew up in a small town in Ukraine near Kiev, alone with his mother and grandmother after his father left for America. He survived the poverty and deprivation of rural Russia during World War I and recalled hiding in haystacks or in the forest to escape from the murderous pogroms of the Cossacks. At the age of twelve he came to America in the steerage of a transatlantic steamer, landing at Ellis Island with other similarly huddled masses. My grandfather remembered seeing the gleaming torch of the Statue of Liberty as the ship glided into New York harbor. He remembered the sweet, precious taste of an orange that he ate, for the first time, while on board. His subsequent journey in America slowly took him west along the rail-lines; he lived with relatives in New York, Chicago, Madison, and, finally, Appleton, Wisconsin.

Before becoming a doctor, my grandfather was, in succession, a milkman, a boxer, and a scientist. His appearance lent itself to each job, as he had the quick, thin legs of a deliveryman; the box-shaped, muscular trunk of a pugilist; and the round, balding, and bespectacled face of an intellectual. Photographs of him from youth to old age always show a dapper man, whether dressed in uniform, scrubs, or coat and tie. In 1938 he married my grandmother, and they stayed together for life. She was the consummate doctor's wife, who raised their three children, managed the books, and kept the home quiet, kosher, and revolving smoothly around his frenetic schedule. As a doctor my grandfather worried incessantly about his patients, but he hid it behind his obsessive work habits and sometimes-gruff demeanor. By the early 1970s probably half of Kaukauna's residents were either current or former patients, a good many of them having been birthed into his hands. Neighbors, strangers, and family alike all made visits to his modest-sized, spartan clinic, where he was renowned as a diagnostician. There weren't many secrets in our large extended family living throughout Wisconsin, but whatever they were, he knew and kept them hidden as a good doctor should.

Until the year before his death, aging had been a relatively benign process for my grandfather. He practiced medicine and surgery until the age of eighty and then retired not because he felt any desire to but because it just seemed logical. When he became ill, however, aging caught up to him quite quickly. In the summer of 1996 he was diagnosed with an aggressive form of prostate cancer. Suddenly, he needed me for support and advice, and we spoke nearly every day about how to manage some of his physical discomfort. Of course, as a newly minted psychiatrist I was of little value to his medical management, and I left that up to my uncle, who had taken over his practice. But our conversations were not really about my grandfather's pain; they were, it seemed to me, cover for dealing with aging and death.

As the de facto family historian I also knew that I had to record his life stories, and so at Thanksgiving we sat down on the porch of my grandparents' house for a taped interview. The life review was almost too painful for him, however, and he broke down crying at several points. I had never seen him cry before, let alone show sadness, but I persisted with the camera, knowing that time was short. In my work with older individuals it is always painful to witness the crumbling of their composure in the face of loss and grief, but I can steel my own emotions because I rarely know what the person was once like. But such was not the case with my grandfather, and I vacillated between denial and despair. As I was saying my good-byes and leaving my grandparents' home at the end of the weekend, he pulled me aside and stated rather perfunctorily that this was probably the last time I would see him. His words were sterile and clinical -- a doctor's way of parting with a patient. But I knew that this was his best effort at saying good-bye. A doctor myself, I brushed off his words in the same manner I might use leaving the clinic at day's end -- "No, Grandpa; I'll see you soon. Call me tomorrow."

I reflected on these moments as I sat at his bedside that spring and tried to contain my emotions. He was not only my grandfather, but also my mentor, my inspiration, and, from my earliest childhood days, my own doctor. But now his life of eighty-three years was drawing to a close, and I was standing witness at the point where aging meets death. Shortly after my grandparents passed away, I compressed much of my grief into an odd fantasy that in the afterlife they had moved down to Miami Beach and were experiencing eternal bliss together, with endless sunny beaches and Early Bird specials. Florida, I imagined, was actually some form of Shangri-La where all of our deceased elderly could be found happily wandering around if we just looked hard enough.

No other period of life has such a feared and mysterious ending. Childhood ends with the budding of puberty and the new challenges of adolescence. Adolescence passes away in the excitement of pulsating hormones, shedding its awkward, uncertain skin in the journey into young adulthood. The subsequent stages of adulthood bring undiscovered treasures of love, children, work, and spirit. Even in the face of failure or lost opportunities, there is always hope for something new. But aging seems to bring this process to a halt. The horizon is unknown except for the single fact that a true ending will come ...

Marc Agronin, M.D., a graduate of Harvard University and Yale Medical School, is a board-certified geriatric psychiatrist. He is the author of "How We Age: A Doctor's Journey into the Heart of Growing Old."