Will things finally, really work out for John Kerry? 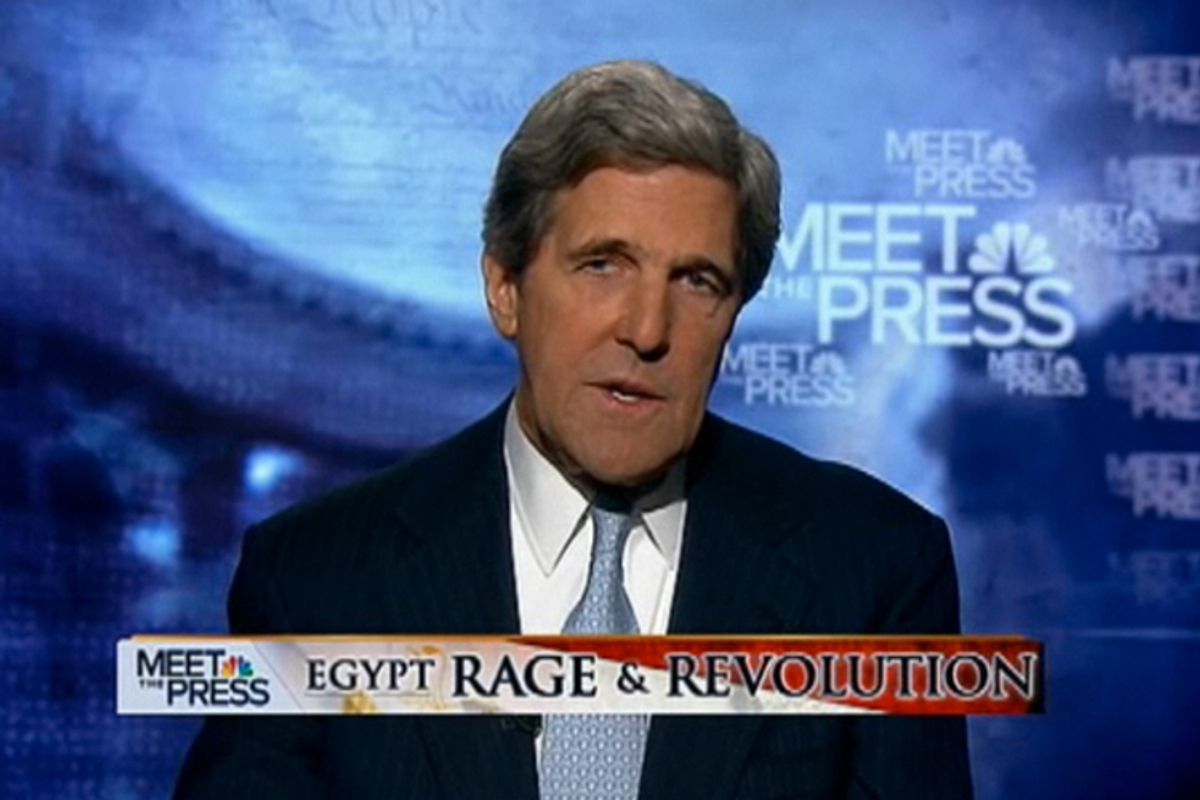 It's hard to feel sorry for John Kerry. He wasn't exactly born into the American aristocracy, but his childhood wasn't marked by hardship, either. He spent summers in France at an estate owned by his mother's family (the Forbes), attended all the right schools, and even hung out on a yacht with President John F. Kennedy when he was just 18. But while he's risen high in American politics, it's also true that Kerry's four-decade public career has never quite amounted to what he hoped it would.

This is the context in which Kerry seems to be launching his latest -- and very possibly final -- push for a big career promotion. The five-term Massachusetts senator, who has chaired the Foreign Relations Committee since 2009, has been highly visible as anti-government protests have swept Egypt in the past two weeks. There was a well-received Op-Ed in the New York Times on Jan. 31, a "Meet the Press" appearance on Sunday and "a lot of headlines in between. Given that no one expects Hillary Clinton to stay on even if there's a second Obama term, the Boston Globe's Joan Vennochi wrote that Kerry "is running an unofficial campaign to become the next secretary of state." And, she added, "for once, he looks artful, as well as ambitious."

Kerry, of course, had hoped to head up the State Department two years ago, when Obama passed him over in favor of Clinton. Instead, he settled for the Foreign Relations gavel, which came free when Joe Biden handed it in to become vice president. It was hardly a bad gig, but it still amounted to a consolation prize. This has been a steady theme in Kerry's political career.

There was, for instance, his first bid for office, back in 1972. He'd been readying himself for a life in politics since (at least) his prep schools days, and the time seemed right. He'd done his service in Vietnam, then returned and earned a national reputation for his opposition to the war. And if any state seemed suited to an antiwar campaign from a principled, young veteran, it was Massachusetts. Kerry was 29 and on his way to Congress, destined, it seemed, to play an outsize role in American life in the 1970s -- and beyond. Except he picked a terrible district to run in. Massachusetts' 5th District, centered in blue-collar Lowell, was a haven for culturally conservative "white ethnics" (it's the setting for the new movie "The Fighter"), folks who resented ambitious young war opponents. Even as George McGovern carried Massachusetts, the 5th District snubbed Kerry and chose instead a Republican named Paul Cronin (who would serve just one term, the last time to this day that a Republican has represented the 5th).

Kerry's dreams of a rapid rise in politics were thwarted. Instead of spending the next decade on the national stage, he went to law school at Boston College, then took a low-profile gig with Middlesex County District Attorney John Droney (who had suffered his own political disaster in 1972, losing by 30 points to U.S. Sen. Ed Brooke). It wasn't until the year he turned 40, in 1982, that Kerry was finally positioned to take another shot at office, one not nearly as glamorous as Congress: lieutenant governor of Massachusetts. It was supposed to be a doomed mission, but some odd circumstances -- '82 was the year Michael Dukakis, unseated by Ed King in a 1978 primary, won back the Democratic nomination and the governorship -- landed him in the winner's circle on primary night (and from there, the general election was a cruise). A decade earlier, he might have sniffed at the idea of being lieutenant governor, but at least now he was back in the game.

And, it turned out, he picked just the right time to become lieutenant governor. Less than a year later, Paul Tsongas, who'd unseated Brooke in 1978, announced that he'd been diagnosed with lymphoma and would leave the Senate in 1984. The seat was wide open. Kerry jumped at the chance to run. So did several other Democrats. The initial favorite was James Shannon, who had eclipsed Kerry as the state's designated Democratic up-and-comer when he was elected to the House in 1978 at the age of 26. A favorite of Speaker Tip O'Neill, Shannon won broad establishment support and led in early polling. Somehow, Kerry edged him out in the September primary (and caught another break that same day when Ray Shamie, a conservative activist, upset the liberal Watergate hero Elliot Richardson in the Republican primary). Kerry was elected in November. Suddenly, his 1970s detour was an ancient memory; he had worked his way back to the national stage, and his future was again bright.

But being in the Senate, Kerry soon discovered, didn't automatically mean standing out on the national stage -- or even in Massachusetts. This was partly a function of his lack of seniority. It also didn't help that his Bay State colleague, Ted Kennedy, was a global political celebrity and a major force in the Senate. Or, for that matter, that Dukakis ran for president in 1988. At best, Kerry was the third most visible Democrat from his home state -- fourth, if you throw in O'Neill, who stayed on as House speaker until January 1987.

Nor was Kerry that interested in playing the "Senator Pothole" role in Massachusetts. Foreign policy fascinated him, not ribbon cuttings for transportation projects back home. The stories of Kerry's indifference to local politicians in Massachusetts -- and their indifference toward him -- are legendary. In his early years in Washington, Kerry's bachelor status -- he and his first wife divorced in 1988, after a four-year separation -- did make news, and not always in a good way. By 1990, with economic anxiety running high in Massachusetts, Kerry found himself facing dangerously low poll numbers and a self-funding multimillionaire GOP opponent, James Rappaport. The race was ugly, but Kerry prevailed. The experience, though, was humbling. He harbored White House ambitions, as everyone knew, but they'd have to wait. There'd be no quick jump from the Senate to a presidential race. (Tsongas, back on the scene following a seemingly successful 1986 bone marrow transplant, ended up being the Massachusetts Democrat who ran for president in 1992.)

He sensed his moment had arrived after his next reelection, in 1996. Opposed by William Weld just two years after Weld had been reelected governor with an astonishing 71 percent of the vote, Kerry had defied initial expectations and survived -- by 7 points. The 2000 Democratic nomination would be open; Kerry prepared himself for a national race, building his national profile and making several high-profile breaks with liberal orthodoxy (notably on education). He was ready to run, and he would have ... if a single big-name Massachusetts Democrat had been willing to stand in his corner. Instead, one by one, they lined up behind Vice President Al Gore. It was a humiliating blow for Kerry, who soon announced that he'd sit out an '00 race that he badly wanted to contest. It got worse in the summer of 2000, when Kerry made Gore's running-mate short list, along with Evan Bayh, John Edwards and Joe Lieberman. Kerry was the logical pick, but Lieberman was Gore's choice. With reporters camped outside his Beacon Hill home, Kerry put on a good face -- something he was getting good at.

Then came 2004, and the near-miss against George W. Bush. The exit polls forecast a Kerry landslide; the actual returns handed Bush a second term. Kerry had missed his dream by 19 electoral votes. He wanted to try again in 2008, and set out in 2005 and 2006 to position himself for the nomination, striking a far more strident tone. The knock was that he'd been unfocused in '04 and had let Bush walk all over him. Desperately, Kerry tried to prove that he could be a "fighter." He never got to the starting line. A "botched joke" just before the 2006 midterms gave Democrats an opportunity to bluntly deliver the message to Kerry that they'd been too polite to spell out before then: No way would they nominate him again in '08.

So he backed out of the '08 race, watched Obama maneuver his way into contention for the nomination, and then -- just two days after Obama suffered a New Hampshire primary loss that seemed crushing at the time -- provided an endorsement. Ten months later, President-Elect Obama was in position to return the favor. Kerry wanted to be secretary of state and his qualifications were impeccable. So, of course, the job went to Hillary Clinton. Kerry took it in stride and stressed all of the important work he'd still get to do with the Foreign Relations Committee.

He's 67 now. There will be no more campaigns for president. The Democrats' Senate majority, reduced to 53 in the last election, may be slipping away as we speak. A Republican takeover in 2012, which would strip Kerry of his chairmanship, is quite possible. 2012 is also when Clinton figures to leave Foggy Bottom. For Kerry, it may be one final, fateful moment: Will he get the job he truly covets, or spend the rest of his career as a minority party senator, painfully aware of just how close he came to being so much more?