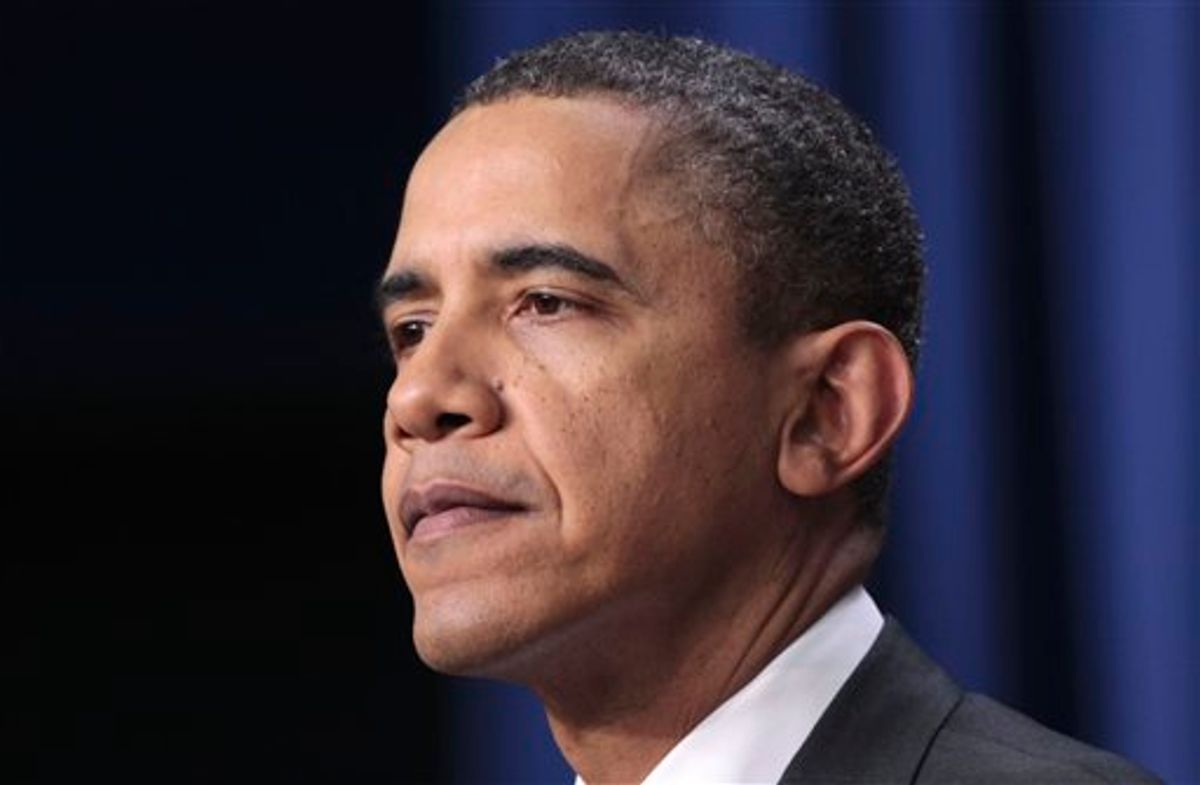 President Barack Obama prodded American businesses to do their share to help the economy, calling on executives to "get in the game" and begin investing nearly $2 trillion accumulating on their balance sheets.

The president, in a speech Monday to the U.S. Chamber of Commerce, called for a cooperative relationship with the private sector and argued government and business have a shared responsibility. He highlighted new efforts by his administration to improve the nation's infrastructure, invest more on entrepreneurs and foster greater innovation.

But to a polite, subdued audience he offered a stout defense of government regulations, even as he promised to eliminate those that are too burdensome. He reached back to history, invoking President Franklin Delano Roosevelt's outreach to corporate leaders and evoking the strains of self-sacrifice expressed by President John Kennedy.

"I want to be clear: even as we make America the best place on earth to do business, businesses also have a responsibility to America," Obama said. "As we work with you to make America a better place to do business, ask yourselves what you can do for America. Ask yourselves what you can do to hire American workers, to support the American economy, and to invest in this nation."

Obama said his appearance at the Chamber was in the interest of "being more neighborly" -- literally true as the trade organization's headquarters are so close to the White House that Obama was able to walk across the street to make his comments. His appearance came as Obama aims to smooth his relations with corporate leaders and persuade major businesses to spend their cash, expand hiring and promote economic growth.

The Chamber and the White House have feuded loudly over the past two years, particularly over the new health care law and an overhaul of financial regulations meant to address weaknesses that led to the Wall Street meltdown in 2008. But in the aftermath of the November elections, which gave Republicans control of the House, both the White House and the Chamber have focused on areas of common ground, despite their lingering differences.

The speech was highly anticipated by the business community. Chamber President Thomas Donohue introduced Obama, saying seats at the event were "one of the hottest tickets in town."

Donohue said the business community had an "absolute commitment to working with you and your administration to advance our shared objectives."

He added: "Our focus is finding common ground to ensure America's greatness in the 21st century."

Obama, who has faced liberal criticism for his overtures to Republicans and to the business community, argued on behalf of the financial regulation and health care initiative that his administration pushed through Congress last year. "The perils of too much regulation are matched by the dangers of too little," he said.

He called for changes in the corporate tax code and increased exports, but pointedly warned his audience that businesses could not translate those benefits into "greater profits and bonuses for those at the top."

"We cannot go back to the kind of economy - and culture - we saw in the years leading up to the recession, where growth and gains in productivity just didn't translate into rising incomes and opportunity for the middle class," he said.

Still, the Chamber and the White House have mutual interests.

Obama needs the centrist cloak that the business community can offer, as he seeks to win independent voters for his reelection bid next year. The Chamber can benefit by softening the sharp edges it developed fighting the health care overhaul and tighter financial rules.

Both sides also need each other to win on areas of policy where they share common interests.

The Chamber can help the Obama administration win congressional support of trade deals, particularly a recently renegotiated pact with South Korea. It can also act as Republican ballast against the influence of the conservative tea party movement.

Both the White House and the Chamber face Republican opposition from fiscal hawks within the GOP to increased spending on public works, from roads and bridges to wireless networks. The chamber has called for such spending to be paid for with user fees, such as a higher gasoline tax. The White House has not embraced that approach, saying only that the administration wants to create an "infrastructure bank" to attract private capital.

The Chamber, which has long advocated for changes in immigration law, could help Obama by pushing Republicans reluctant to take up such a politically charged issue.