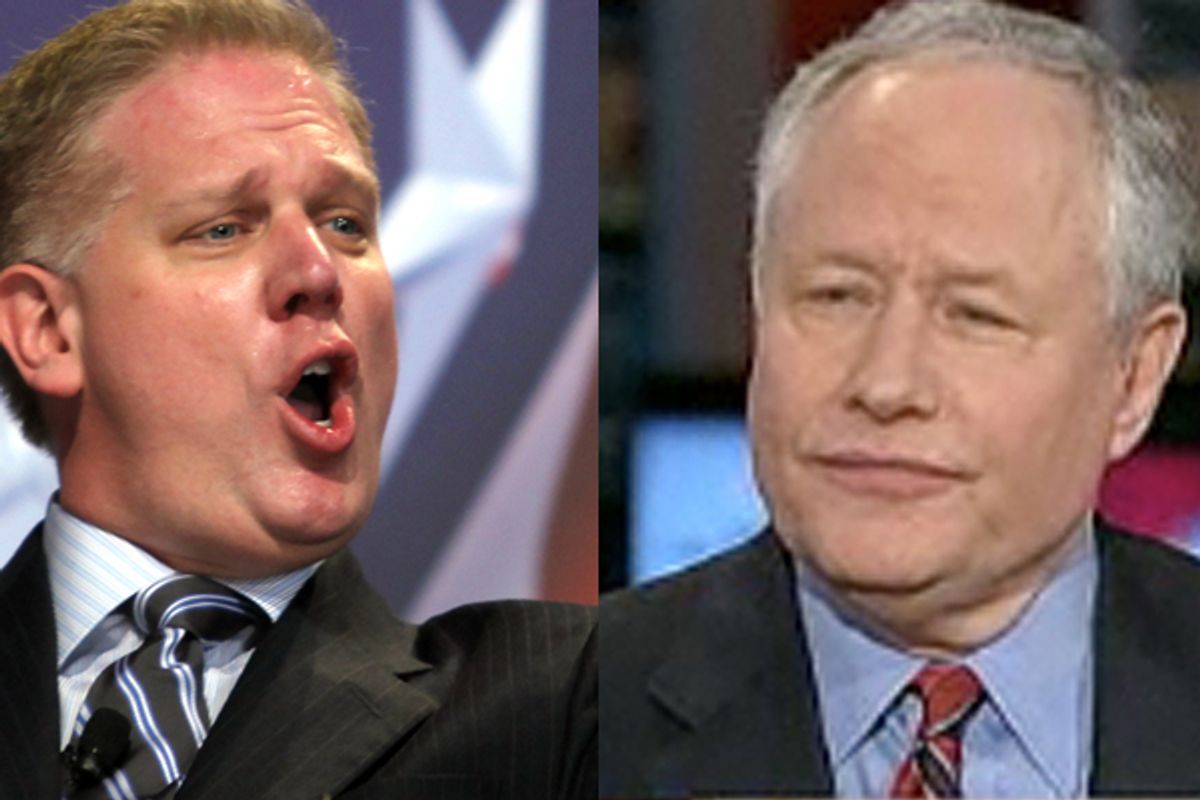 The ongoing media slap-fight between Bill Kristol and Glenn Beck is both delightful and upsetting. While it's undeinably fun to watch these two opposite but equally unpleasant figures of modern conservatism tear each other down, rooting for either one of them is apt to make one queasy.

It started when Kristol wrote a largely unobjectionable column for his Weekly Standard in which he chided conservatives who weren't inspired by the Egyptian demonstrations. Freedom is good, dictators are bad, conservatives should be pro-democracy -- it's a pretty slam-dunk case. He wrote:

But hysteria is not a sign of health. When Glenn Beck rants about the caliphate taking over the Middle East from Morocco to the Philippines, and lists (invents?) the connections between caliphate-promoters and the American left, he brings to mind no one so much as Robert Welch and the John Birch Society. He’s marginalizing himself, just as his predecessors did back in the early 1960s.

This inspired a response from Beck, in which Beck correctly diagnosed Kristol as a predictable tool of the establishment:

That is... basically 100% correct. Kudos, Glenn. Glenn then went right back into his amazing conspiracy theory about the Muslim Brotherhood and Islamic socialism and how American liberals and George Soros will cheer as Muslim Communists take over India, Portugal, the UK, Spain, France, etc..

The beautiful thing about this feud is that both sides employ both spot-on, devastating assessments of each other and their usual off-the-wall nonsense talk. Glenn Beck is totally right that Bill Kristol is an amoral, power-worshipping toady. But Bill Kristol is not, actually, a useful idiot for the caliphate that seeks to take over the world. Kristol is right that Beck is an embarrassing, modern-day Bircher loon. But Kristol ignores the fact that "respectable" conservatives engage in the exact same wild conspiracy-mongering about Islam as Beck.

After all, Kristol's group Keep America Safe employed arguments developed by Andrew McCarthy that the Obama Justice Department was filled with terrorist sympathizers for an entire ad campaign, and Lowry's magazine employs McCarthy, who literally wrote an entire book explaining how the American left and "radical Islamists" both have a leader in the current president. Is Beck's incoherent rant really any less crazy than McCarthy's theory that Obama's relatively hawkish foreign policy is actually meant to serve Islamists who think that "al-Qaeda has outlived its usefulness?"