The company tries to recruit customers in maternity wards. Back off already! 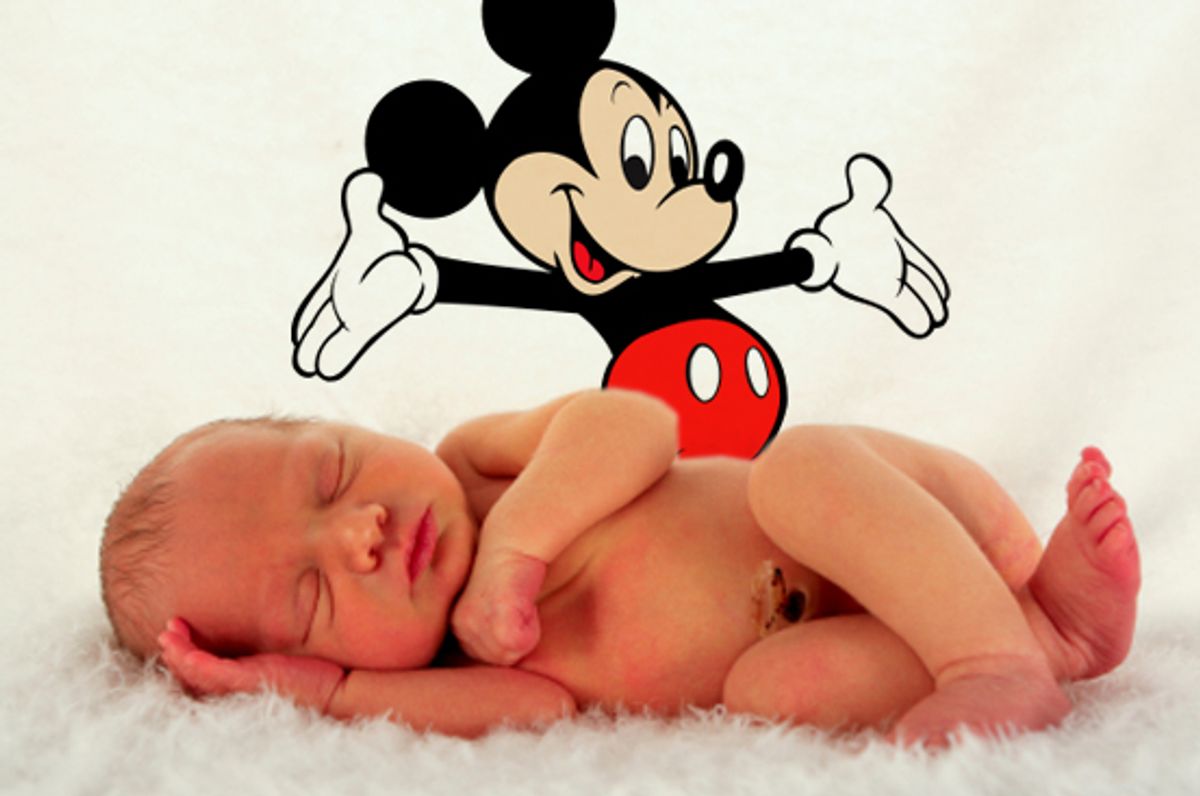 The mouse is coming for your baby. No longer content to dominate the hearts, souls and bedspreads of America's princess-obsessed preschoolers and Selena Gomez-wannabe tweens, the Walt Disney Co. is now, like a neurotic witch queen with ego issues, poised to weave its spell on infants from the moment the cord is cut and the birth goo is wiped off.

As the New York Times reported earlier this week, in the past month, Disney representatives have quietly moved into 580 maternity hospitals around the country, offering new moms a free "Disney Cuddly Bodysuit" with assorted beloved Disney characters, and encouraging them to sign up for e-mail alerts from Disney Baby, where "Disney Momgineers have been weaving their magic to create the softest, most huggable, cuddliest designs that are also cute as a button." Apparently the talking mice and sparrows they'd originally contracted to do the garment work wanted to unionize. The full new Disney baby line rolls out in stores and online in May.

Everybody loves a freebie – a truth born out every time someone fires up the T-shirt cannon at a sporting event. And hospital swag is nothing new. It's routine to send new families home with a new diaper bag full of products that the baby brands hope will encourage consumer loyalty, from diapers to pacifiers. Until just three years ago, New York City was discharging mothers whose own milk was still coming in with cases of infant formula -- not a confidence-inspiring move.

And while no Magic Kingdom outfit is going to stand between an infant and mom's lactation, Disney's gambit does raise questions about the branding of babies and the privacy rights of parents. Disney is sweeping into hospitals on the coattails of Our365, a company that offers in-hospital portraits and online photo sharing for new parents.  So don't just swaddle Junior up a Simba bodysuit, get an image of it and post it for all the family and friends to see on the Internet! Oh my God, these Disney people are geniuses.

When you opt to push out a kid in a hospital, you find yourself on all kinds of lists you didn't even know you'd been put on. For a year after my first daughter was born, I was deluged with junk mail for baby products and a free subscription to a dopey, doctor's waiting room parenting magazine. I also got phone calls at home from one of the big diaper brands, asking if I wanted to buy in bulk. And here's the thing -- maybe I did. A new parent pretty much spends the first three months of her child's life in a David-Bowie-in-Berlin-style blackout. She is, in her own way, as vulnerable as that little bundle of joy she just cannot get to stop screaming at 4 in the morning. Disney, which isn't stopping at bodysuits and will be launching a full product line from baby food to strollers, knows that. It's even considering a new program to offer free theme park tickets to pregnant women. (Next, I suppose, mouse ears for fetuses.) Today, your infant is just a little meatloaf wearing Ariel's face on her torso; blink and she's become a 5-year-old who won't go to school without her tiara. Believe it, there is no greater gateway to a child's consumer indulgence than a mother's exhaustion and dependence on familiarity.

My own family certainly hasn't been immune to Disney's charms over the years, many of which are formidable. When I consider the last decade of my daughters' lives, I see Nemo and Tinkerbell and Ariel there in the pretend games they play, the board books that got them excited about reading, in the catchy little tunes they have a limitless endurance for hearing. If Elmo can be on baby products, why not Mickey? But while I have no truck with Disney's products or the movies themselves, there seems something borderline cruel in the relentlessness of the company's branding, and the notion of the mouse at the delivery room door, waiting to swoop in and imprint our infants. Or, as Disney Baby more romantically prefers to put it, "creating magical moments right from the start."

Disney is surely part of many of our children's magical moments. But for a new family still in the ostensibly safe space of the hospital, even Snow White could tell you:  Just because somebody's offering you a tempting delight doesn't mean it's the healthiest idea to take it.