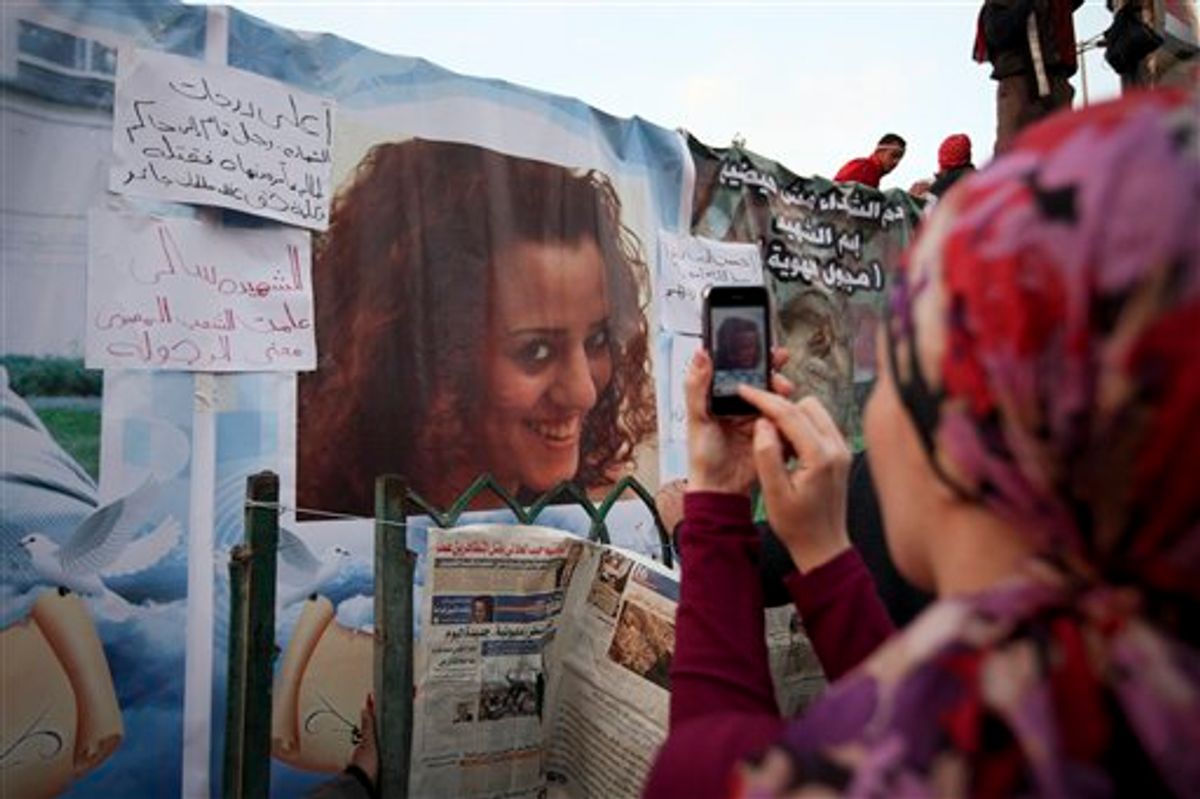 An anti-government protester takes a picture of a poster of Sally Zahran, age 23, who was killed in southern Egypt last month during clashes, in Tahrir Square, in Cairo, Egypt, Tuesday, Feb. 8, 2011. Faces of some of the hundreds killed in Egypt's two-week-old uprising are beginning to emerge from the fog of chaos. Details of the lives lost have started to appear in Egyptian newspapers, on websites and in huge posters put up in Cairo's Tahrir Square, the center of the revolt that erupted Jan. 25. The paper next to the photo reads in Arabic "Sally the martyr. She taught Egyptian people the meaning of manhood". (AP Photo/Tara Todras-Whitehill) (AP)
--

A curly-haired 23-year-old marching in her first protest. A Cairo artist and father of two young children who braved tear gas and gunfire to capture history with his video camera. And a 16-year-old girl struck by an errant bullet.

The faces of some of those killed in Egypt's 2-week-old uprising are beginning to emerge.

A comprehensive count is a long way off as some bereaved families hesitate to come forward and human rights researchers complain of intimidation by authorities. A preliminary tally of 297 dead has been compiled by one rights group, based on visits to seven hospitals in Cairo, Alexandria and Suez.

The victims are Egyptians from all parts of society, say protest sympathizers -- contrary to the picture painted last week by Egyptian Vice President Omar Suleiman, who accused foreigners of instigating the uprising.

Details of the lives lost have been recounted on websites, in newspapers and on huge posters put up in Cairo's Tahrir Square, the center of the revolt that erupted Jan. 25.

"This gives the revolution a face," said reporter Mai el-Wakil, who has begun writing a "Faces of the Fallen" column in the English-language daily Al Masry Al Youm.

The uprising began peacefully, with rallies organized via Facebook and Twitter against President Hosni Mubarak's nearly 30-year rule. But skirmishes soon erupted between protesters and security forces. On Jan. 28 major clashes broke out in Cairo, Alexandria, Suez and elsewhere, with troops firing tear gas, rubber bullets and live rounds to break up throngs of stone-throwers. It became known as the "Friday of Anger."

Ahmed Basiony, a visual artist, musician and teacher, had been in Tahrir Square from the start, compiling a video diary, said his friend, gallery owner Mohammed Allam.

Allam said he and Basiony had talked almost daily about their frustration with Egypt's problems -- poverty, high food prices, rampant corruption -- but he was surprised by his friend's intensity after the uprising broke out. "He just needed to fight and to document," Allam, 26, told The Associated Press.

Late on Jan. 28, Basiony was separated from his friends. They found his body three days later in a hospital. Doctors said he had been hit by rubber bullets and apparently struck by a car, Allam said. He left behind a wife, a 6-year-old son Adam and a 1-year-old daughter Salma.

In his last Facebook post, Basiony wrote: "I have a lot of hope if we stay like this. Riot police beat me a lot. Nevertheless I will go down again tomorrow."

"If they want war, we want peace. I am just trying to regain some of my nation's dignity," read the post, according to Al Masry Al Youm.

Among the demonstrators in Alexandria on that Friday of Anger, was 21-year-old Ahmed el-Hag and his 16-year-old brother, Baha. Their father, Magdy el-Hag, said he didn't know his sons had joined a rally in the city's Mohram Bek neighborhood after Muslim prayers.

When bullets began to fly, Ahmed, a recent university graduate, was among those struck. El-Hag said he was told later that a police captain from the local precinct screamed at the crowd, then fired directly at the demonstrators.

"My son got a bullet in the back and (it) went through his chest," the father said. "His younger brother suddenly found that his brother was not beside him, and looked around to find him bleeding on the ground."

El-Hag said he had hoped that Ahmed would become a lawyer and bring him grandchildren. His death was a "catastrophe for the whole family."

Elsewhere in Alexandria, 16-year-old Amira el-Sayyed was inside a friend's house when shots were fired from the roof of a nearby police station to intimidate residents and prevent them from joining protests.

"A bullet penetrated and shattered the glass of the window where my daughter and her friend sat," said the girl's father, Samir el-Sayyed. He said he returned from work to finding a large crowd outside his apartment building.

He buried his daughter quietly the next day because of the chaos at the time, but plans to join with other bereaved parents to eventually sue the government. He said those responsible for the death of Amira, who had dreamed of becoming a scientist, should be made to pay for their crime.

At the other end of Egypt, in the southern district of Sohag, 23-year-old Sally Zahran, an English-Arabic translator, joined the protests for the first time on Jan. 28. "She felt it would be safe at that point. So many others were going out on Friday," her friend, Aly Sobhy, told Al Masry Al Youm.

He said Zahran was not a political activist, but wanted the situation in Egypt to improve.

The newspaper said the woman was beaten to death by pro-Mubarak thugs, who had been hired to confront the protesters.

A huge photograph of Zahran, her smiling face framed by dark curls, is now on display, along with pictures of seven other victims, near one of the main entrances to Tahrir Square. Some show the victims in death, their faces bloody and bludgeoned. "His blood was not spilled in vain," read a message below some of the photos.

On Tuesday morning, as the square slowly started filling, some stopped to linger before the posters or take pictures with their cell phones. Others were eager to pay tribute by talking about those they lost.

Among them was Walid Abdullah, a 41-year-old graphic designer, who carried photos of his dead friend Mustafa Sawi, a 21-year-old university student, on his cell phone.

The Egyptian authorities, while promising to investigate the killings, have not released casualty figures or names of the dead. Instead, security forces have raided offices and seized laptops of two human rights groups trying to compile lists, activists say.

They say reaching a final death toll will take a long time, in part because authorities have tried to disrupt the work. In last week's raid, security forces seized laptops and other equipment from two leading rights groups, and detained staffers and volunteers, including two from London-based Amnesty International.

Illustrating the challenge, even the identity of a man whose death was captured on video remains a mystery.

Shot from a cell phone camera, it shows the man walking from an Alexandria alley toward a group of black-clad gunmen in a nearby square. At some point, the man opens his jacket, as if to dare them to shoot him. They do, missing on the first shot and taking him down on the second.

Two women who filmed the scene told CNN that the incident had been preceded by clashes in the area. Another video shows the man's body being dumped in the back of a pickup truck and driven away.