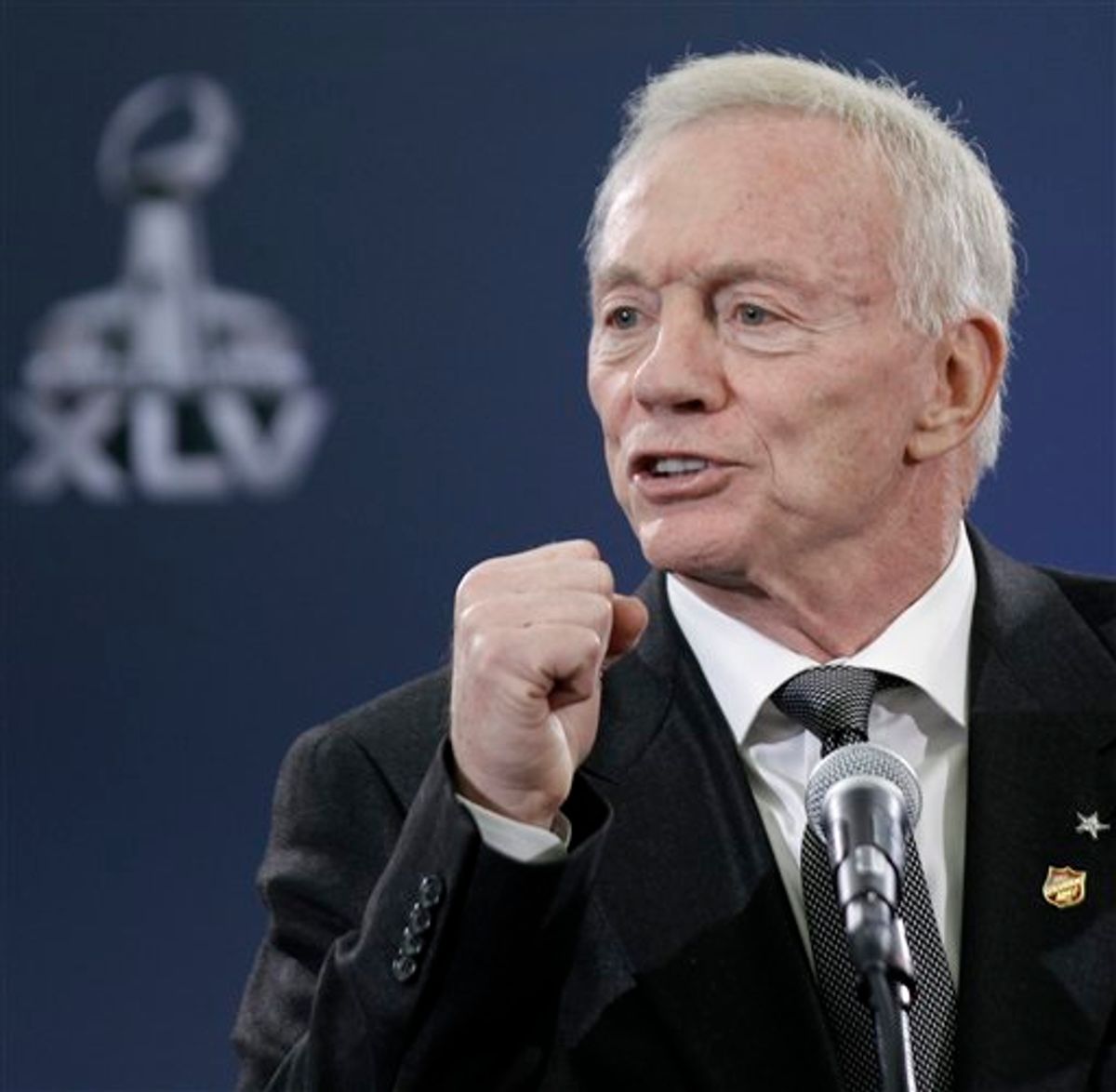 Roads froze and airports closed. Falling ice sent six people to the hospital. Finally, seats to the big game vanished hours before kickoff. Super Bowl week in Texas was not always so super.

Annoyance over difficult driving conditions and altered travel plans early in the week turned to anger Sunday for hundreds of fans with tickets who were forced to watch Green Bay beat Pittsburgh on TV at $1.3 billion Cowboys Stadium in suburban Arlington because their temporary seats weren't ready.

Visitors left Dallas-Fort Worth en masse Monday, many wondering whether the region had been prepared to host an event of such magnitude.

"Logistics are a major, major problem here," said John Boyle, a 53-year-old Packers fan who was waiting at Dallas-Fort Worth International Airport for a flight home to Minnesota. "And I think everyone would say the same thing."

North Texas wasn't at fault for the seating problem -- the NFL officially took the blame Monday, and Cowboys owner Jerry Jones chimed in to say his team shared it.

The region had no control over the weather, either, but that wasn't much consolation to the owner of a Super Bowl memorabilia shop in downtown Dallas. Matt Smith said business for the week was off 90 percent Friday, when an overnight snowstorm capped a 100-hour stretch of subfreezing temperatures that turned sidewalks into slide-walks and kept many people off the streets.

That was the same day ice fell from the roof of Cowboys Stadium, injuring six workers on the plaza below. Although none of the injuries was life-threatening, the news broke when weary visitors were on their fourth day of dealing with a rare cold snap that included subzero wind chill readings.

Even after the weather cleared, Tim Bastion of Pittsburgh found out the hard way how difficult it can be to get around without a car in sprawling suburbs where organizers intentionally put major NFL events as many as 30 miles apart to emphasize the Super Bowl's regional efforts.

Bastion and his son had to take a hotel shuttle nearly 10 miles back to the airport in order to get a cab to take them places.

"They should have a better system to get people from location to location," Bastion said. "This town is so spread out, and there are so many places people would like to go."

Hundreds of flights were canceled early in the week and again Friday when more snow hit, but airline estimates indicated most of the impact was not on Super Bowl travel. Big weekend crowds at NFL events and in bars, restaurants and malls were further proof that most visitors who were planning a Super Bowl trip actually made it.

Estimates of the economic impact on the Super Bowl vary widely -- from $200 million to $600 million -- and it's also unlikely the prolonged and unusual weather event will affect those figures significantly, said Terry Clower, the director for the Center for Economic Development and Research at the University of North Texas.

"What might have changed is where some of the spending took place," Clower said. "For example, because of the snow and because of the transportation snags that were weather-related, you might have had more people getting a meal from room service or inside the hotel."

Bill Lively, president of the North Texas Super Bowl Host Committee, stands by his belief that the region will get another Super Bowl.

"I don't believe the weather issue will be a problem in getting the game back," Lively said.

The area rallied with about 48 hours of typical sunny Texas weather in the final countdown to the Super Bowl, then the clouds and a chilly wind returned just about the time the NFL's seating issue because a major story. Now the region and league face a skeptical public going forward.

"I know a lot of people are probably having hours and hours and hours of meetings post-event to try to learn from this," said Julie Dennehy, a Massachusetts-based public relations consultant. "What they need to do is communicate how much they learned, and how they've changed. Not what they did yesterday, but what they're going to do tomorrow."