Is Keith Olbermann at Current TV the weirdest idea ever? 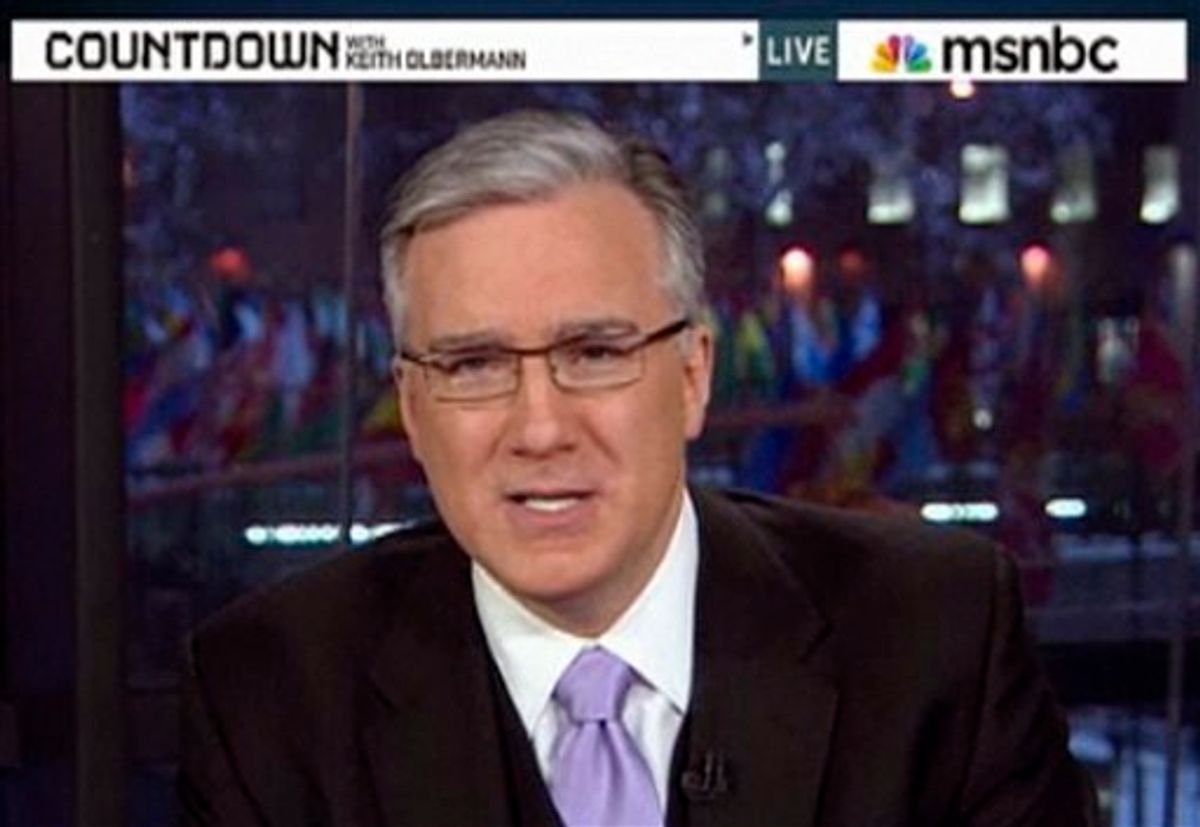 This frame grab from MSNBC video, shows Keith Olbermann on "Countdown" on Jan. 21, 2011. Olbermann returned from one last commercial break on "Countdown" to tell viewers it was his last broadcast, and read a James Thurber short story in a three-minute exit statement. Simultaneously, MSNBC e-mailed a statement that "MSNBC and Keith Olbermann have ended their contract." The network thanked him and said, "we wish him well in his future endeavors." Neither MSNBC President Phil Griffin, Olbermann nor his manager responded to requests to explain an exit so abrupt that Olbermann's face was still being featured on an MSNBC promotional ad 30 minutes after he had said goodbye. (AP Photo/MSNBC) NO SALES, MANDATORY CREDIT (AP)
--

Olbermann will both host and executive produce -- this is key -- an hour-long prime-time show five nights a week on Current. In addition to this anchor role, the sometimes tough-to-manage Olbermann will help overhaul Current's news strategy and hold equity in the company.

Nothing is more vital to a free America than a free media, and nothing is more vital to my concept of a free media than news produced independently of corporate interference. In Current Media, Al Gore and Joel Hyatt have created the model truth-seeking entity. The opportunity to partner with Al, Joel and Mark Rosenthal makes this the most exciting venture in my career.

Reactions so far have been positive. David Shuster tweeted almost immediately after the news:

Right now on Current TV: "Viral Videos," featuring "Keyboard Cat." Later, "Kill It, Cook It, Eat It." KO will be rebuilding a network-again

Keith Olbermann, the former MSNBC host turned tweeter about the weather, will announce his next move today. According to the New York Times' Media Decoder blog, Olbermann will team up with Al Gore's Current TV in some sort of Internet-meets-teevee jujitsu. Since the former "Countdown" host is contractually forbidden from working in television, Current seems like an interesting choice.

Started in 2005 by Al Gore and cronies, Current TV originally set out to break the cable mold with a mixture of user-generated content, Internet-friendly short segments called "pods," and some sort of partnership with Google. These ideas never really worked out, and after massive layoffs during the recession, Current could use some new wind in its sails.

Enter Keith. His harried departure from MSNBC left many viewers, fans and even foes wondering what the polarizing pundit would do next. And let's not forget the great gossip about who would fill his slot at MSNBC. A new Keith Olbermann show on Current TV would both offer Olbermann the independence he longs for and the flexibility to work on the Internet in the near term.

Of course, we're still in the gossip arena, and speculation abounds. The Times blog post came after an announcement Monday that Olbermann would announce "the next chapter in his remarkable career" Tuesday at 11 a.m., less than 24 hours before Current TV is set to make a big announcement to advertisers. This is dizzying. It's entirely possible that Olbermann, who once wrote a column for Salon, will announce something entirely different, that he is doing his own thing. In a way, the crumbs lead in that direction as Olbermann has already set up a new Twitter account (@FOKNewsChannel, or "Friends of Keith News Channel") and someone registered a pretty obvious domain name (TheOlbermannShow.com).

Keith and Current are not the weirdest pair ever. Since Al Gore invented the Internet -- we couldn't help ourselves from that joke -- what better place to experiment than with his channel. The politics make sense, the brands make sense, and everyone's a little sick of speculating.

We're on the edge of our seats.