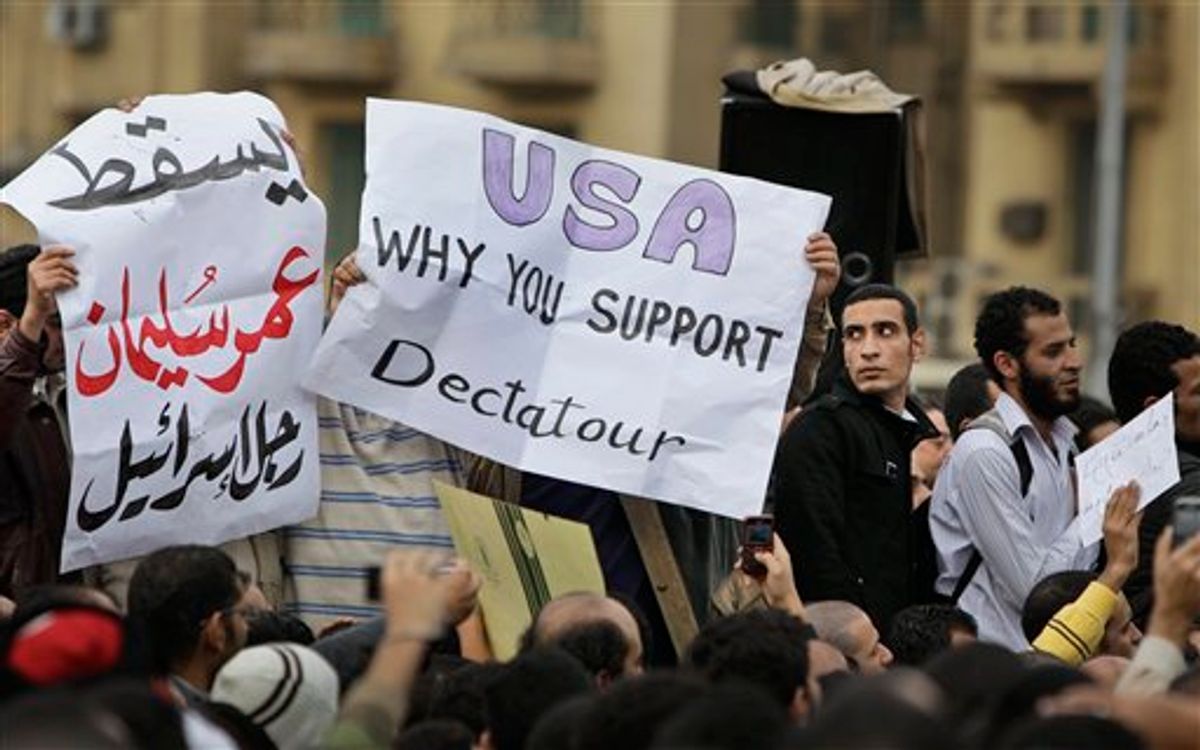 But, lacking better options, the United States is encouraging him in negotiations in a still uncertain transition process in Egypt. . . . The result has been to feed a perception, on the streets of Cairo and elsewhere, that the United States, for now at least, is putting stability ahead of democratic ideals, and leaving hopes of nurturing peaceful, gradual change in large part in the hands of Egyptian officials -- starting with Mr. Suleiman -- who have every reason to slow the process.

Suleiman has long been favoured by the US government for his ardent anti-Islamism, his willingness to talk and act tough on Iran -- and he has long been the CIA's main man in Cairo. . . . In the mid-1990s, Suleiman worked closely with the Clinton administration in devising and implementing its rendition program; back then, rendition involved kidnapping suspected terrorists and transferring them to a third country for trial. . . .

Under the Bush administration, in the context of "the global war on terror", US renditions became "extraordinary", meaning the objective of kidnapping and extra-legal transfer was no longer to bring a suspect to trial -- but rather for interrogation to seek actionable intelligence.  The extraordinary rendition program landed some people in CIA black sites -- and others were turned over for torture -by-proxy to other regimes. Egypt figured large as a torture destination of choice, as did Suleiman as Egypt's torturer-in-chief. At least one person extraordinarily rendered by the CIA to Egypt -- Egyptian-born Australian citizen Mamdouh Habib -- was reportedly tortured by Suleiman himself.

[Israeli defense official David] Hacham said the Israeli delegation was "shocked" by Mubarak's aged appearance and slurred speech. Hacham was full of praise for Soliman, however, and noted that a "hot line" set up between the [Israeli Ministry of Defense] and Egyptian General Intelligence Service is now in daily use. Hacham said he sometimes speaks to Soliman's deputy Mohammed Ibrahim several times a day. Hacham noted that the Israelis believe Soliman is likely to serve as at least an interim President if Mubarak dies or is incapacitated. (Note: We defer to Embassy Cairo for analysis of Egyptian succession scenarios, but there is no question that Israel is most comfortable with the prospect of Omar Soliman.)

Given the long-obvious fact that the Obama administration has been working to install Suleiman as interim leader as a (dubious) means of placating citizen anger, the above-referenced NYT article today offers a long and detailed profile of the new Egyptian "Vice President."  Unfortunately, the paper of record wasn't able to find the space to inform its readers about Suleiman's decades-long history as America's personal abducter, detainer and torturer of the Egyptian people, nor his status as Israel's most favored heir to the Mubarak tyranny (though the article did vaguely and euphemistically acknowledge that "the United States has certainly had long ties with Mr. Suleiman" and that "for years he has been an important contact for the Central Intelligence Agency").

Suleiman's repression and brutality -- on behalf of both the U.S. and Mubarak -- has been well-documented elsewhere (The New Yorker's Jane Mayer was the first to flag it after the Egyptian uprising, while ABC News recounted how he once offered to chop off the arm of a Terrorist suspect to please the CIA; see also the above-linked Al Jazeera Op-Ed, which provides additional details of Suleiman's personal taste for overseeing torture).  As I noted yesterday, there's a case to be made for the Obama administration's support of Suleiman; it's the same case used to justify our 30-year active propping up of Mubarak, along with the dictators of Saudi Arabia, Tunisia, Yemen, Jordan, and so many other places (and "torture-by-proxy" seems still to be an important part of U.S. policy in the region).  But whatever one's views are on that conduct, no discussion of the U.S.'s current pro-Suleiman policy -- and certainly no purported media profile of Suleiman -- is complete without at least some mention of his status as Mubarak's torturer-in-chief and domestic oppressor, and of the Israelis' deep desire to see him rule Egypt.  Does anyone dispute the central relevance of those facts?

Today's Times article does a decent job of conveying how unwilling Suleiman is to bring about anything resembling a real transition to democracy, how indifferent (if not supportive) the Obama administration seems to be about that unwillingness, and how dangerously that conduct is fueling anti-American sentiment among the protesters.  But the fact that American policy has "changed" from imposing Mubarak on that country to imposing someone with Suleiman's vile history and character belongs at the forefront of every discussion, especially ones purporting to examine who he is.  Praising Suleiman for his "valued analysis" and commitment to fighting The Terrorists while neglecting to mention these other critical facts -- as today's NYT article does -- is misleading on multiple levels.